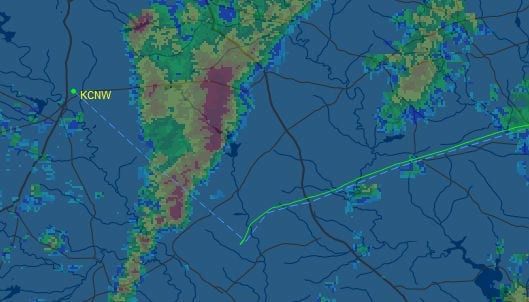 Three general aviation airplanes crashed in the week before Christmas 2011. Unfortunately, that by itself isn’t newsworthy. But since each accident involved people traveling by light airplane to visit family for the Christmas weekend, the stories ended up on TV.

These accidents are certainly tragic for the families involved, but I think they’re also tragic for pilots in general. There is nothing as rewarding as using an airplane for personal transportation, and when it goes horribly wrong, it knocks all of us back a step. Add in the fact that the flights involved kids and relatives, escaping work or school for what should have been a fun holiday trip, and it’s even worse.

Let’s look at the specific accidents. First, the requisite disclaimer: these accidents are very recent, little is known for sure and the NTSB won’t issue a final report for many months. With those caveats in mind, we can engage in some thoughtful speculation:

Serious weather for a Cherokee (courtesy of flightaware.com).

Ice, thunderstorms and fuel exhaustion are nothing new in NTSB reports. They show up with depressing regularity. But there’s one factor that is even more common in accident reports, and it was certainly present here: all three flights probably had some pressure to complete the trip. As any pilot can attest to, the decision to cancel a flight can be incredibly difficult; it’s in our nature to complete the mission and not admit “failure.” Imagine the increased pressure if you’re taking the family to Grandma’s for Christmas.

And while it’s easy to Monday morning quarterback, none of these flights were clearly dangerous. Sure, they weren’t exactly Sunday afternoon joyrides, but for experienced instrument pilots (and all three pilots were) the conditions did not necessarily call for an immediate cancellation.

There were numerous reports of moderate ice in the area of the TBM crash, but that’s true of a lot of winter days in the Northeast and the conditions this day were only forecast to last for the first 100 miles (for a full account of the weather conditions, see Scott Dennstaedt’s detailed post). Certainly no airplane is immune to severe icing, but if you canceled every time ice was reported, you wouldn’t get much utility out of the airplane. Not to mention, the ability to fly in icing conditions is one major reason pilots buy turbine airplanes like the TBM. It may have been that, in this case, the moderate icing that is so common was actually severe or SLD.

In the case of the Cherokee, the thunderstorms were serious, but they were also in fairly well-defined lines that are often possible to navigate around. The airplane may have been trying to do just that when it crashed, although night conditions certainly would have made this harder.

And then there’s the Conquest. While California to Pennsylvania may sound like a long flight (and it is), it is not impossible in a high performance turboprop like the Conquest, especially with a good tailwind. In fact, the airplane had flown a 6.5 hour flight earlier in the year, only slightly shorter than the accident flight was planned to be.

But read the details of each of these three accidents carefully, and it’s apparent that these scenarios are exactly where accidents happen–at the margins. The conditions were just good enough to encourage making the flight, but just bad enough to be dangerous.

Indeed, it’s fairly easy to cancel a trip when the bases are at 200 ft., the tops are at 35,000 ft. and there is ice everywhere in between. Likewise for a 9 hour trip in an airplane with 7 hour range. But how about relatively low tops or just a little bit longer flight than you’ve done before? It’s a much harder decision. Throw in the insidious effects of “mission-itis” and the desire to impress family, and it’s easy to see why the pilots launched on these trips.

Like most pilots, I’ve noticed the same effect in my own flying career. In particular, Sunday trips when I’m trying to get home before the week starts often have an added pressure, whether I realize it or not. Over time, I’ve forced myself to be extra conservative on these trips. I simply tell myself that the weather is either too bad to fly in or it’s not–there cannot be a different standard for Sunday flights and Tuesday flights. In fact, you almost need to take a contrarian point of view: the more important the trip, the more skeptical you should be.

How much is too much ice? How do you know?

The same goes for family and non-family flights. Just because I’m trying to make a trip on time with my family should not affect my personal minimums. In practice, this is an extremely difficult emotion to manage. We are all salesmen to a certain extent when we fly with family. We want to prove that all the money and time we spend on airplanes is worth it, and brings value to the entire family. We also want to prove that we are good pilots. The feeling of failure if we cancel can be overwhelming in these situations.

In the end, we have to remember that the most powerful safety tool we have as private pilots is the ability to cancel a trip (or divert to another airport). If you’re being paid to fly an airliner, it’s a different story–you’re going unless the weather is truly awful. But in Part 91 flying, there is almost never an occasion when we have to make the trip, even for Christmas.

It’s possible that some or all of these accidents would not have happened had the pilots delayed their takeoff or diverted. That’s speculation and that’s also easier said than done. But it’s worth remembering a line from Dick Collins: “Airplanes are near perfect, all they lack is the ability to forgive.” The point is you only have to be wrong once, and the airplane doesn’t care if this trip really counts, and it doesn’t care if your family is on board.

My new year’s resolution for 2012? The next time I feel like I have to make a flight, I’m going to slow down and take a hard look at the conditions–weather, airplane and pilot. If it’s going to be a stretch, even just a little one, I’m pouring another cup of coffee and staying in the FBO.

The Great Debate: are glass cockpits better?
Scroll to top