Blog - Latest News
You are here: Home1 / Article Archive2 / John's blog3 / What does “loss of control” mean? Probably not what you think

Read any aviation website or magazine and you’ll quickly encounter the phrase “loss of control,” which is often discussed as if it’s the bogeyman stalking inattentive pilots. According to NBAA, over 40% of fixed wing fatal accidents over the last decade can be pinned on this cause. That’s obviously a huge number, so it seems mystifying that we can’t solve the problem.

It’s certainly not for lack of trying. Everyone has their favorite solution, and spirited debates have sprung up around upset prevention and recovery programs, angle of attack indicators, spin training for the Private Pilot test, and better flight reviews. These often devolve into the stale argument about technology vs. stick and rudder skills, with predictably depressing results.

But back up—before solving a problem, it helps to be clear about definitions. What does loss of control (it’s aviation so we have to have an acronym: LOC) actually mean? The FAA says it’s “an unintended departure of an aircraft from controlled flight.” That definition is so broad as to be useless, like saying the leading cause of car crashes is “unintended rapid deceleration.” 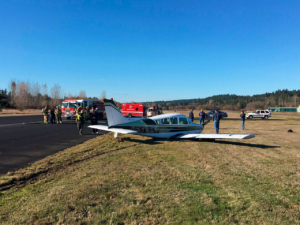 Calling this “loss of control” doesn’t really tell us much.

Digging deeper, the FAA suggests the root causes of LOC are “poor judgment/aeronautical decision making, failure to recognize an aerodynamic stall or spin and execute corrective action, intentional regulatory non-compliance, low pilot time in aircraft make and model, lack of piloting ability, failure to maintain airspeed, failure to follow procedure, pilot inexperience and proficiency, or the use of over-the-counter drugs that impact pilot performance.” In other words – everything! It could be a training problem, a proficiency problem, an aeromedical problem, or simply an anti-authority attitude.

Partly, the fuzziness around LOC is a statistical artifact. The aviation industry has made significant strides in reducing controlled flight into terrain and weather accidents, and fewer pilots are getting lost these days. As these categories have declined, a lot of the leftover accidents get lumped into LOC almost by default, making it an imprecise phrase.

As usual, AOPA’s Nall Report is the place to turn for details—and it has some revealing statistics. The latest edition lists 179 fatal accidents in 2019 among non-commercial fixed-wing operators. How many of those were due to LOC?

Including all the stall/spin accidents in the total means at most 30 out of 179 fatal accidents (17%) could be called loss of control. That is still too many, but it’s hardly overwhelming. For comparison, weather was also involved in 30 fatal accidents during this time period.

Each of these accidents can have serious long-term consequences, whether it’s higher insurance premiums or shattered pilot confidence, but a runway excursion leading to a prop strike is not the same as a crash that kills a family. Many pilots hear “loss of control” and instantly think of a base-to-final stall/spin accident. The statistics show that is wrong; much more likely is a crosswind landing gone awry and a bent airplane.

Even if the goal is to prevent all accidents, regardless of severity, LOC is not a very useful phrase because it suggests a simplicity of cause that simply doesn’t exist. Consider two randomly-selected accident reports from 2019 that can be categorized as LOC: 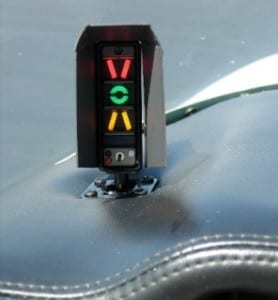 Angle of attack indicators are helpful, but hardly the answer to LOC accidents.

What magic bullet would have prevented these accidents? Spin training, to take one popular example, would hardly have helped either of the pilots above. It’s hard to see how an angle of attack indicator would have made a difference either. One pilot needed the discipline to ignore the distraction, the other needed practice on go-arounds. Decision-making needs as much work here as stick and rudder skills. Spend a few hours reading NTSB reports and you’ll find dozens of similar examples.

This shows the frustrating but essential truth about aviation safety: most accidents are a unique combination of pilot skills, airplane idiosyncrasies, weather, and flat out bad luck. Our incessant efforts to organize personal tragedies into sortable categories hides as much as it reveals. Just consider the third leading cause of accidents: “other.”

So what can be done about loss of control accidents? Sadly, there are no easy fixes—no cutting edge avionics, no special training maneuver, and no FAA regulation can save the day. A good first step would be to stop talking about LOC as a consistent failure mode to fix. Instead, the flight training industry needs to do the harder but more important work of teaching good airmanship. That’s not a one-time fix; it’s a lifelong commitment that each of us needs to embrace.

Good airmanship starts with humility, understanding that it can happen to you and the only reason it doesn’t is because you work constantly to avoid it. In practice, that means adopting smart habits: do the math on every flight (performance calculations, weight and balance), respect the POH limitations, don’t make low passes for any reason, practice slow flight more often, take a flight instructor along if you haven’t flown recently, and always fly a stabilized approach below 500 feet VFR and 1000 feet IFR. Simply being able to fly the target speed on final approach within +5 and -0 knots would go a long way to preventing those non-fatal landing accidents.

Most importantly, focus on two numbers that matter most: time logged in the last 90 days and time in aircraft type. A huge percentage of GA accidents are caused by either lack of basic proficiency or unfamiliarity with the airplane. Yes, this is your excuse to tell your family you simply must fly more!

All of this might sound like the aviation version of “eat your broccoli.” So be it—broccoli is good for you, after all.

When does technology become a dangerous distraction?
Scroll to top