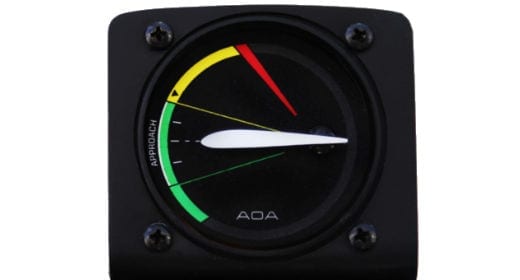 Hop on the bandwagon–Angle of Attack (AoA) is the new must-have aviation accessory.

This year’s Oshkosh fly-in was just the latest evidence, with a number of new product introductions, safety seminars and ad campaigns all proclaiming the life-saving potential of AoA instruments. Since loss of control is still the number one cause of general aviation accidents, the AoA revolution could be the most important safety innovation in our lifetime, we heard.

Given all the hype, a casual observer might think the concept was just discovered. But as any pilot with even a basic knowledge of history knows, it’s been a hot topic numerous times over the years, as far back as Wolfgang Langewiesche’s classic book Stick and Rudder. Today, almost every turbine airplane has an AoA instrument. It’s hardly a new idea.

The latest push has centered on bringing this technology to piston airplanes. It started with the FAA, who declared affordable AoA instruments one of its most-wanted safety improvements. AOPA’s Air Safety Institute has enthusiastically supported the cause, too.

But the most newsworthy AoA story to come out recently was courtesy of ICON Aircraft, the designer of the yet-to-be-delivered amphibian LSA. They recently released a video touting the AoA instrument that will be front and center in their A5 cockpit. The glitzy video presents AoA as if it’s a major breakthrough in aviation and ICON is the first airplane ever to offer it.

I don’t blame ICON. This is the type of thing startups have to do to get attention and keep customers excited during the long march from concept to shipping a product. And their AoA design does look appealingly simple. But the media who accept this at face value and the “safety experts” who think it’s a revolution should know better. AoA is an instrument, nothing more, nothing less.

Some AoA advocates point to the Asiana 214 crash in San Francisco as an example of the type of accident that could be prevented with such an instrument. To me, it shows exactly why AoA won’t do much. Most importantly, the pilots have to look at the instrument for it to be of any use. In the Asiana case, the crew managed to ignore the airspeed indicator for a long time, even as it eventually showed them being almost 30 knots slow. Another instrument wouldn’t have prevented this disaster.

Besides looking at the instrument, pilots have to know how to react to its indications. For the GA pilot struggling to log 25 hours in a year, the physical stick and rudder skills may be more important than the recognition skills.

An AoA instrument also won’t help the idiot who buzzes his girlfriend’s house at 20 ft and pulls up at 3 Gs. Neither will it prevent the over-gross takeoff on a hot day that eventually results in a stall. These scenarios are both depressingly common, and get grouped under the “loss of control” heading.

Ex-military pilots (like some on the ICON team) love AoA because it’s religion in the military. To them, it seems shocking that GA pilots are still flying based solely on airspeed. I’ll admit that, when landing on the pitching deck of an aircraft carrier at night, AoA is probably a great tool. But for the average Cherokee pilot landing on a 5000 ft. runway, the situation is quite different.

Airspeed control on final approach matters a lot more than a new instrument in the panel.

Here’s the simple fact that most AoA proponents know, but don’t like to admit: airspeed is a great proxy for AoA most of the time. General aviation pilots fly in a very small envelope: +/- 10 degrees in pitch and 30 degrees of bank in most cases. Within those boundaries, monitoring airspeed is a perfectly good way to keep from stalling. If you’re doing aerobatics or flying a jet at FL410, an AoA instrument may be essential; in the pattern in a 172 it’s not going to tell you much more than the airspeed indicator.

Yes, I know that “a wing can stall at any airspeed,” but how often do you read about a stall/spin accident that occurred at 150 knots? Most of the base-to-final stall/spin scenarios happen because the pilot got too slow, plain and simple. That suggests good airspeed control would improve safety more than a new instrument in the cockpit.

But here’s where the breakdown is. Ask most flight instructors and they’ll tell you that new students and licensed pilots alike are dreadful at airspeed control. If the common standard of staying within +5 and -0 knots of Vref were enforced, thousands of pilots would have to surrender their certificates.

We don’t have an instrument problem, we have a stick and rudder skills problem. Instead of spending a lot of money on new instruments, let’s teach pilots how to maintain the proper airspeed on final. That would be revolutionary.

Why you must fly a taildragger
Scroll to top