Blog - Latest News
You are here: Home1 / Article Archive2 / I was there3 / Around the world in the “seven oh seven” 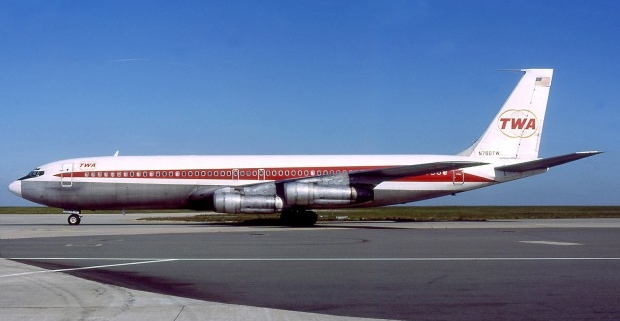 One of the first large, long range, intercontinental jet airliners to come on the scene in the late 1950s and early 60s was the Boeing 707. For TWA’s most senior pilots, moving from pistons to jets was the biggest transition since the change from visual to instrument flying in the 1930s. Several of our older captains opted to bypass the jets and finish their careers flying the Connie. The younger fellows, on the other hand, could hardly wait to jump into a jet!

But for many of us less experienced young bucks the transition was not easy either, as there were many  differences and totally new concepts: thrust vs. horsepower and expressed as “EPRs” (Engine Pressure Ratio), making RPM and MAP obsolete; thousands of pounds vs. hundreds of gallons of fuel; high altitude meteorology and Mach buffet vs. stall buffet; spoilers vs. ailerons; split spoilers to control pitch in the event of a jammed stabilizer; Dutch roll, high altitude meteorology and physiology, and more.

When it came to flying the jets the first thing we learned was that jets don’t respond to power changes like prop planes. they will only go up or down if you point them up or down, and then they will—at alarming rates of climb and descent! Suddenly everything happened much faster than it used to. 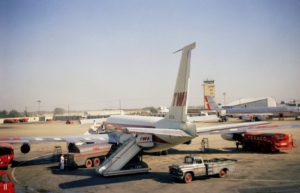 The early “water wagons” were underpowered. (Photo by Jon Proctor)

Our first 707 was the Boeing 707-131 (707 is the basic model designation, -1 is the first variation and the next two numbers are the customer code, in TWA’s case, 31). The first were the “water wagons.” The Pratt & Whitney JT-3 straight pipe engines were injected with water, boosting engine thrust for takeoff from 11,600 to 12,400 lbs. per engine. When re-engined with higher thrust, cleaner, and quieter fan engines, they became B-707-131Bs. They seemed like rockets at fight training weights (low fuel loads and no payload)–practically unmanageable, it seemed! Most training was still done in the airplane as simulators had not yet advanced much beyond procedures trainers.

I had checked out as captain on the DC-9 in 1968 and a short time later graduated to the Convair 880 in 1969. By May of 1971 I had over 1000 hours of captain time in the 880. Then the energy crisis and recession hit us in the 1970s. I was displaced (twice) from the left seat due to cutbacks so I bid first officer on the 707 international out of JFK. I was rated on the aircraft as it was company policy that all international F/Os be type-rated on the equipment flown, but I never flew it as captain.

The first thing I learned from commuting to New York from Chicago was that it is the perfect way to really screw up the best job in the world. I also found out that there are four, not three, “most useless things in aviation.” In addition to, “the runway behind you, the altitude above you, and the fuel in the truck” there is: the four-stripe co-pilot, so I was told.

At the time, the senior 707 trip was the around-the-world flight: eleven days westbound, or ten days eastbound. One trip was worth about 10% more than a full month so after flying one trip a month for ten months (and with your one-month vacation) you were done for the year! Sound like a dream? They were killers. I flew only three, one westbound and two eastbound. When I got home, I was a basket case, getting up and going to bed at all hours of the day and night and crabby most of the time. When I told my wife, Sharon, that I wasn’t going to fly them anymore, she was overcome with joy, and said, “Oh, good—you’re just awful when you come home from that trip.”

My first around-the-world trip was the westbound. It began by wasting half a day getting to New York. Then after a quick nap (hopefully), I flew east all night to London (LHR) with a layover. The next leg was the polar flight west from London to Los Angeles (LAX). On a fine day this was most interesting, with magnificent views of the frozen polar wilderness. On the polar route, all directions are true, not magnetic. We would set our “polar path” compasses from slaved (magnetic) to the gyro position. Even the few VORs up there are oriented to true north. 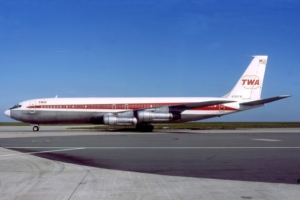 Flying around the world in a 707 was not an easy job.

Then it was LAX to Honolulu (HNL) and HNL to Guam (GUM). Guam is an interesting “South Seas Paradise.” It was a very popular honeymoon destination for Japanese newlyweds. I had fun taking pictures of couples taking pictures of each other. I also loved looking through the remains of the Japanese concrete pill box bunkers along the beach. The water is so clear, they say it offers some of the best scuba diving in the world.

Next it was GUM to Hong Kong (HKG), where the crews bought so much duty free stuff you would wonder how the plane ever got off the ground. Then HKG to Bombay (BOM, now Mumbai); BOM to Tel Aviv (TLV); TLV to Rome Fiumicino (FCO); FCO to JFK; then stand-by for a space-available seat on a Chicago bound flight home.

At each stop the previous day’s crew would take over for the next leg, but the same old 707 would keep on a trucking with little more than fluids servicing and an occasional tire/wheel change. What a workhorse!

Okay, so what about flying the seven oh? In a word, RELIABLE. It was not a dream to fly like the Convair 880 and not as pretty, I think. The seven oh felt very “Mack truckish.” Of course, we were at nearly maximum gross weight on almost every departure, so it was hardly a rocket—we dusted off a lot of roof tops on our way out of town.

Is Top Gun: Maverick based on the Bob Hoover story?

From the archives: The Airphibian
Scroll to top