The first DC-9s to come off the production line were the dash ten series, around 1965. TWA’s were officially DC-9-15s. The “little 9” was a real performer, with a max weight of only a little over 90,000 pounds and two Pratt & Whitney JT8D-7s pushing it with a combined thrust of 28,000 pounds. Talking with a Mexicana pilot one day who also flew them, he said that they called it el raton super loco; loosely translated as “crazy mighty mouse.” 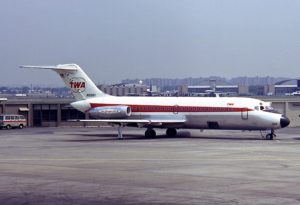 And it really was. But this became another case of growing what was a little rocket into a big hog. Douglas started stretching the plane but not the “horsepower.” Douglas merged with McDonnell in 1967 and it became the McDonnell-Douglas (MD) series, and finally the Boeing 717 after Boeing ate McDonnell-Douglas in 1997. Many of the later models are still in service.

TWA only flew 9s for a few years, then we sold the fleet to Ozark because we felt the Boeing 727 was better suited to the needs of our domestic market. (Ozark’s fleet, by then all later models, came back when TWA purchased Ozark in 1986.)

We operated the 9s mostly on short routes east of Kansas City and they were conventional in most respects. One big difference was a several degree nose-down attitude in the approach configuration. Every other jet I flew approached in a noticeably nose-up attitude. Another thing I remember is that the alternate pressurization system was nothing more than a lever connected directly to the outflow valve. This required the co-pilot’s full attention, which rendered him useless for most other duties. I think this arrangement was found only on the dash tens.

Another anomaly was the magnetic compass, which was mounted on the bulkhead behind and above the co-pilot’s head. The compass card was printed inside out, or as a mirror image, and was read by way of a small rear-view mirror on top of the glare shield. A line that became a classic was when a captain asked a new hire co-pilot what that mirror was for. After the co-pilot answered correctly, the captain would say, “No, that’s so the new co-pilots can check their pimples.”

The DC-9 was the only TWA airplane I ever flew with a two-man crew, which was an interesting experience. It seems there was more camaraderie with the two-man crew. With three, often it would develop into a bit of a two-against-one situation, especially with two new hires and one old WWII vet. A standing joke among new hires was that the purpose of having a flight engineer (F/E) on board was to help the first officer (F/O): if the captain had a heart attack, they could get the old SOB’s body out of “my” seat. The DC-9 operation was fun; two twenty-something guys with two twenty-something girls hopping up and down the Ohio Valley for a month together. Sort of like getting the keys to Dad’s car every night.

But my most vivid memories of flying the 9 have nothing to do with the airplane; they have to do with what I was doing in it. I had only been with TWA for about three years when the first new hires (1963 and 1964 hires) began to be awarded captain bids. Most student captain training was done in the DC-9, as it was the junior equipment at the time. Very few of us had flown the 9 and I had only flown as F/O on the Connie and the CV-880. I did not bid a captain vacancy—I was assigned one! I had recently turned 26 and had just a few more hours than the 1200 required for an ATP at the time.

The whole program took me nine months. What a coincidence as my wife was pregnant with our first born at the same time. Management was scared to death turning us “kid kap’ns” loose with a jet airliner full of people and looked at us through jaundiced eyes. It was an up or out program—no second chances and no reverting to previous status. The failure rate in the DC-9 upgrading program was almost 15%. 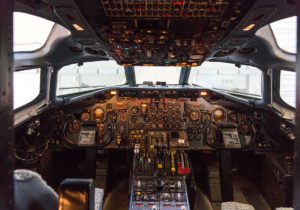 Not a lot of electronics here.

The program called for training and flying the rating ride in Kansas City. Then a minimum of 50 hours in the left seat with a line check airman, a semi-final with another check airman and a final check with the domicile DC-9 flight manager. After my first 50 hours with a great instructor, Captain Jim Morgan, I was amazed at all the good sense he taught me in addition to all the “thou shalt” and the “thou shalt nots” in the company flight and policy manuals. I received a second 50 hours with another check pilot. I had had the carrot and now came the stick. I won’t name him, but he was antithetical to Jim and the next 50 hours was sort of a prolonged hell week.

All a checker need do to make life tough for a checkee on a two-man crew is to just to sit there and do and say nothing at all–let him fly solo until he messes up, then see how good his recovery is. That is how this checker operated. If he didn’t do something that was the F/O’s responsibility and I called him on it he would say that it was the captain’s responsibility to see that the F/O (or F/E) completed theirs.

When the 50 hours were finally over, he recommended me for a semifinal check with a management pilot. The first day of our two day, ten leg trip went well. Beginning our descent on the third leg on the way home, I failed to note that my co-pilot had not started the cabin down–until our altitude got down to the cabin altitude. Well, all I could do was request a slow descent, about 500 ft. per minute, costing the company how much time and money… busted.

I went home to tell my bride of one year and about due to deliver our first born at any minute that my career with TWA was over. After hardly a moment’s pause, she said, “That’s all right, our happiness does not depend on TWA.” No wonder I love her. I was set up for an evaluation ride with one of the DC-9 flight managers and that went OK. A few days later, Jeff Jr. was born, and a couple of days after that I went out for my final check with the head guy.

I thought things went okay, but he never said a word, and well, who knows? We caught the crew bus to our hangar and as we got off the bus he started chatting with another DC-9 check airman who was about to board the bus. In parting, almost as an afterthought, said, “Oh, I want you to shake hands with our newest DC-9 captain.”

SOF in the hot seat

Who is in charge of your safety?
Scroll to top