Blog - Latest News
You are here: Home1 / Article Archive2 / I was there3 / Test pilot: two lessons learned in Cessnas

This was the first flight in my 1955 Cessna 180 after its annual inspection in 1968. I had been an instructor at Lane Aviation in Columbus, Ohio, before taking a job at Kent State, teaching industrial design. I bought the 180 from Lane when I left for Kent. Since I had not flown from the right seat for a while as I was no longer flight instructing, I decided to do the flight from the right seat.

The 180 was capable of very short takeoffs using flaps. As I was sitting in the right seat at the end of the runway, I decided to also do a short field takeoff. I pulled the seat up to normal flight position from where it had been moved back during the inspection. I raised the flap lever to full flap position using the long lever between the seats, pulled the yoke full aft, and gave the 180 full power.

The plane started its takeoff roll and went about 200 feet before pitching up and leaving the runway. It was about two feet above the runway when I suddenly found the seat and I were against the rear seats of the plane. The front of my seat was no longer on the seat tracks and had pitched backward as well. My left hand pulled the throttle to idle as I was pitched back. Since my feet were no longer on the rudder pedals the aircraft turned left due to torque and just cleared a runway light. 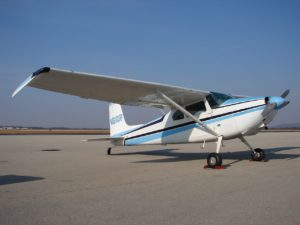 The Cessna 180 is easier to fly when the seat stays attached.

Since the yoke was already full aft and I still had a grip on it, I was able to pull myself forward and push the throttle back to full power position and simultaneously haul myself past the upright flap handle into the left seat. I continued the takeoff using right rudder to get back above the runway instead of flying directly at the main airport buildings.

If I had flown from the left seat, a passenger would have later had the same adventure but would not have been flying the airplane. If I had not decided to do a short field takeoff from the off-track right seat, I think I would have pitched the airplane up and cut power as I slid rearward into the back seat and had no means to change seats quickly enough to avert a crash on to the runway.

The cause of this adventure was that the cotter pin preventing the seat from coming forward off the track had not been replaced after the seat was returned to the plane after its inspection. It came off the track when I pulled it forward for the takeoff. Since I am short it needed to be full forward. It was forward enough to be off the track and caught enough in the carpet that I thought it was secure.

I later sold that airplane and flying required rental aircraft for a while. I rented a Cessna 182 from the local FBO. I planned a flight to Atlanta and DeKalb-Peachtree Airport to visit my daughter and son.

The preflight was normal. I tested the fuel tank drains and found just a little water. The flight was IFR in IMC without problems until descending in northern Georgia as instructed by Atlanta Center. Just as I broke out of the cloud deck at 7000  feet, the engine began to run rough. I switched tanks and it smoothed out briefly. Then it started to run rough again. It seemed as though it was running on three of its six cylinders. I suspected water in the fuel, but the tanks had tested OK.

I started to slowly lose altitude. I informed the controller of my engine problem and he asked if I had an emergency. I said “affirmative” immediately and asked for the closest airport. I could see I was over mountains and woods. He gave me a heading to Gainesville, Georgia. The new heading put me right over the four-lane highway which went to Gainesville. Everything but the highway was woods and a bridge across large Lake Lanier. I wondered if anyone had made a landing on a bridge. I was slowly losing altitude but made it to a landing at Gainesville. I reported being on final to Gainesville to the controller, and then my safe landing to ATC by phone.

On the ground I wondered about my next step when a local pilot drove up in his pickup truck to ask what my problem was. I relayed what happened and to my surprise he said he owned a 182 and had a similar adventure that turned out to be water in tanks that did not show up when first tested. He said to check the tanks again. I did and found a large amount of water from both tanks. He said, “Fill both tanks, check the full tanks again and run the engine for about ten minutes on the ground.” He said that is what he did when he had similar trouble and felt it was safe to continue the flight. The engine ran fine for the ground test and the rest of the VFR flight to DeKalb-Peachtree Airport. There was no further problem on the return flight to Ohio.

Shortly after that I was at an FAA Wings meeting and reported the event to two FAA representatives. They seemed to be puzzled about a solution but not very interested.

Later I read of these events occurring to others. The unsecured seat track was easily diagnosed and already known, but the problem of undetected water in fuel tanks took a while. Older Cessna wing bladders had started to warp and create low spots where water could accumulate and not drain when tested on level ground. In flight wings would not stay level and the water would get to the engine intake line. The remedy was to put in new drain points where the new low points in the tanks were, or replace the tanks. The temporary solution was to test fuel from the drains and then rock the wings and retest until no more water was found from the regular wing tank drains.

The startling news I learned was that there were fatalities from both problems before attention was paid and corrections were made. I knew I was the test pilot when I finished my homebuilt RV-6, but these sessions as a Cessna test pilot were done in total ignorance and with a whole lot of luck. My test reports were not taken seriously enough and others suffered disastrous results.

If you encounter and survive a problem be insistent—a real pain in the butt—until you know it has been taken seriously. We have to look out for each other. You could save a lot more serious pain for others in your band of flying brothers and sisters, and their often forgotten kin.

A history of aviation gasoline

My not quite rusty return to flight
Scroll to top