Blog - Latest News
You are here: Home1 / Article Archive2 / I was there3 / You’ll get in trouble sonny

There was someone I did not know with my friend Jim at one of the tables in the University of Cincinnati student union. I had come there with a classmate for a coffee break from our industrial design class. Our instructor was a design professional who knew not to hover over us after we had been given all the criteria of a new problem. He treated us as adults and knew we would work diligently on the problem even if we weren’t in class. Once we had the problem we would likely spend almost every moment working on it, even in our sleep.

Not only was Hugh a vet, he was a B-17 bomber pilot in the Eighth Air Force, flying from England in 1943 when the odds of survival were almost nil. The Air Force lost more people than the Navy and Marine Corps, combined. When he met the nine men of his bomber crew they were a little uneasy about flying with a kid, but they flew with him for 25 missions, one of the crews lucky enough to make it. By then, none of them cared if he looked like a teenager.

Hugh told us while in training he and his crew had landed at a combination civil/military airport to refuel and get lunch in the airport cafeteria while there. The cafeteria’s balcony where they were eating faced the airport terminal apron where his B-17 was parked. While eating their lunch, Hugh decided to get charts from the plane to study before departing. 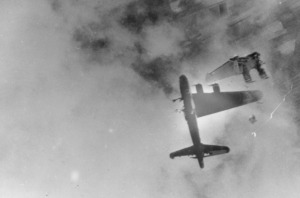 Trouble is exactly what many bomber crews found over Germany.

There were two older ladies eating at a nearby table. As Hugh walked down the stairs and through the gate to the airplane, one of the ladies stood up and called out to Hugh, “Don’t go out there, sonny. You’ll get in trouble.” She had mistaken him for a teenager without authority to be in that area, so was totally startled when he swung up into the belly hatch of the B-17 and briefly appeared in the cockpit. Later, she was still watching and saw him fly the plane away with all the crew aboard. She was likely astonished about the children who were fighting WWII.

I never saw Hugh again at school. About five years later, I moved to a smaller Ohio town to join a design partnership with my former college roommate. Our office was in a building which housed civil engineering firm and an attorney’s office. This was the next time I encountered Hugh. He had established a law practice in the same town and his office was in the same building. We gradually realized we had previously met and became friends.

One night as we were both leaving the building, I ran into him in the hall at the doorway. I knew the late night TV movie was to be Twelve O’clock High, a film about a B-17 group in England. I asked if he was going to watch it. He instantly went white and said, “Hell no, I saw it once before. It had actual combat footage and scared me almost as much as when we were flying those missions.” He told me that many of the crews could not get in their aircraft unless they had a drink. They had to hold on to some part of the plane to keep from shaking until they got busy with duties they could perform by rote.

Once they were in the air and busy, they were under control even when they were flying through flak (anti-aircraft fire) and facing German fighters flying through their formations at a closure rate of 500 miles an hour, firing at them as they went through. Many B-17s did not return. He and his crew saw many of them go down, hoping to see the opening parachutes of their crews. There were no parachutes from others that disappeared in a blast of flame.

I think I mentioned meeting him at school and the comment made by the lady warning him not to go out to his airplane. After a pause, he said, “That lady had no idea of the truth she had spoken when she said, ‘Don’t go out there, sonny. You’ll get in trouble.’ It was more trouble than any of us could ever imagine. If we had imagined, we might not have gone.”

A close call for the XB-70 at Edwards AFB