The North American Aviation XB-70 Valkyrie was a Mach 3, high-altitude strategic bomber designed in the late 1950s, with the maiden flight on September 21, 1964. Two prototypes were built and flight testing was conducted at Edwards Air Force Base in California. 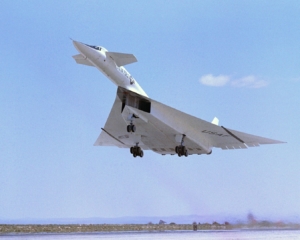 The XB-70 has an unmistakeable profile.

Meanwhile, the Russians had developed their high-altitude surface-to-air missiles (SAMs), which made the XB-70 vulnerable. On May 1, 1960, a high-flying CIA Lockheed U-2 being flown by CIA pilot Francis Gary Powers was unexpectedly intercepted by a Russian SAM while on a reconnaissance mission deep in Soviet Russia. This shoot-down resulted in the cancellation of the XB-70 production contract in 1961.

NASA and the Air Force used the two prototype XB-70s for high-speed flight tests and research into sonic booms. The SST, Supersonic Transport, was on the drawing boards of several aerospace companies at that time.

I arrived at Edwards AFB in September 1966 for my new job as a civilian flight test engineer with the US Army Aviation Test Activity, which involved flight testing helicopters. My first day at Edwards, I drove by the “boneyard” where I could see the significant remains of a white airplane. Being an Aviation Week & Space Technology subscriber, I easily recognized the white parts as from the second XB-70, which was destroyed in a mid-air collision at Edwards.

The mid-air occurred on June 8, 1966, during an air-to-air promotional photo shoot organized with five aircraft with General Electric engines: the XB-70, an F-104, an F-4, a T-38, and an F-5. The F-104 was flown by Joe Walker, who was considered NASA’s top civilian test pilot.

Walker was tucked up very close on the XB-70’s right tail section. Wake vortex from the XB-70 stalled the F-104 left wing and the F-104 rolled into the XB-70, exploding, and destroying the vertical stabilizers of the XB-70. The XB-70 entered a non-recoverable flat spin. The XB-70 pilots had individual escape capsules, and Al White was able to eject successfully, but Air Force Major Carl Cross was not able to close his escape capsule due to the centrifugal forces from the spin, and he perished. 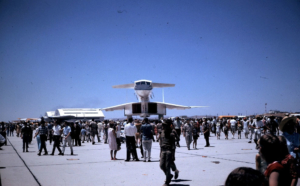 The airplane was huge, towering over the ramp.

Fast forward to October 1966, when Jean and I attended the Edwards AFB open house and fly-in. I took the following photos which show the size of the XB-70 compared to the spectators.

At the airshow, the civilian aircraft, including many WWII trainers, took off to fly a racetrack pattern, left to right, in front of the spectators. The aircraft made several orbits, getting lower on each circuit. Slightly separate from the rest came a Ryan PT-22 Recruit, a two-place, open cockpit, low wing WWII primary trainer. It was flying very low and was at about a 45-degree angle to us. We could hear each cylinder firing on the slow-turning 160 hp Kinner radial engine: clank, clank, clank, clank…

Suddenly, the PT-22’s right wing hit a structural pipe holding the windsock. It was like watching a slow-motion movie: the PT-22 pitched up, the right wing sheared off near the wing root, and due to the loss of lift of the right wing, it started a roll to the right, directly towards Jean and me!

The PT-22 impacted the concrete ramp inverted, which was bad news for the occupants in the open cockpits. I instantly took off running, and then I realized that Jean was not with me. She was standing there, mesmerized with the sliding PT-22. I went back, grabbed her wrist, and hollered “RUN!” We took off running and didn’t stop until we were sure that we were clear of the sliding PT-22.

The PT-22 was sliding inverted and slowly rotating due to the drag on the remaining wing. A young airman in uniform tried to outrun it, but he was caught and was draped over the tail section of the PT-22. The airplane finally stopped, so the young airman jumped up and started running again. It would have been humorous if it had not been so serious. 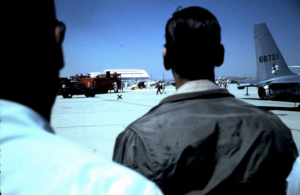 And where did the PT-22 stop? It slid right up to the rope surrounding the remaining XB-70 on display, and the PT-22 fuel tank caught on fire! Fortunately, the fire truck was right there and the fire was quickly extinguished. Other firemen lifted the tail of the inverted PT-22 to extract the two occupants. The owner/pilot was injured but survived. Unfortunately, the young airman who just along for the ride was killed.

I took the third photo (at right), but unfortunately, I was not close enough for clarity. However, if you look closely, you can see the fire in the nose of the PT-22, and the firemen lifting the tail to extract the two occupants (you can see a portion of the XB-70 white horizontal stabilizer on the far right of the photo).

And so, Edwards came seriously close to losing the only remaining XB-70. But it survived and is now on static display at the National Museum of the US Air Force at Wright-Patterson AFB in Dayton, Ohio. To learn more, I recommend this book (I read and enjoyed this book when it first came out). Go or no go: desert storms