Blog - Latest News
You are here: Home1 / Article Archive2 / I was there3 / My not quite rusty return to flight 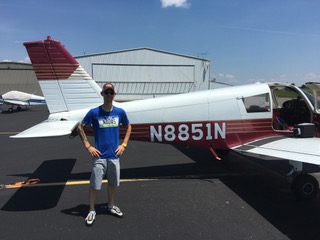 “Watch your airspeed; you’re getting too slow.”

If you fly too slow in an aircraft, you’ll fall out of the sky, and I welcomed this observation by the flight instructor. On this summer afternoon in Nashville, the temperatures were high, even more so in the cockpit. But at this moment, the beads of sweat were more from stress than heat. 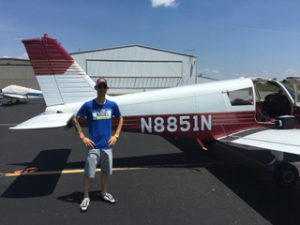 Once a pilot, always a pilot—but you can get rusty.

I’m not a student pilot, and technically this wasn’t a lesson. However, flying as pilot in command for the first time in well over a year, it sure felt like it. It was never my intention to let that much time lapse between flights. But thanks to the Covid-19 induced quarantine, paired with the financial burden of my recent move halfway across the country, it was my reality.

A pilot’s license never expires, but the phrase “rusty pilot” carries some significance in general aviation. Once we pass the checkride and earn a private pilot certificate, we’re required to complete a biennial flight review with an instructor, who will reassure the FAA that we’re still airworthy. Rusty pilots haven’t fulfilled this requirement in the last two years and can’t legally fly until they do.

Since becoming a private pilot in 2017, it’s been a personal mandate never to become rusty. The road to becoming a private pilot is exceptionally challenging, at times very stressful, and costs a fair amount of money. The idea of letting my certificate lapse and losing the ability to operate an aircraft was simply out of the question. My schedule and budget may never allow me to fly as much as I’d like, but I vowed to at least stay current.

Nevertheless, life happens, unexpected events like a global pandemic materialize, and before I knew it, a year had passed. With the date for my biennial flight review looming, each day gave way to the next, and I was unsure how to avoid becoming a rusty pilot. But I had promised myself that I wouldn’t let it happen, and even in this time of financial uncertainty, I was determined to get back in the air.

My first step back was starting a small business to generate some income until I could resume my career in live production. Slowly, my financial situation began to look less bleak, and eventually I was able to justify devoting a small percentage of my income to flying. Although still legal to fly on my own, I hadn’t done so for a year and a half, and I felt that much time away required a few proper lessons before flying solo. So, I searched for a flight instructor and began preparing for my return to the skies.

I updated all the flying-related applications on my tablet and spent hours studying charts to familiarize myself with the region. I checked the weather, current and forecasted. I read, re-learned, and made notes until my brain couldn’t take any more.

Despite an extended break from flying, my pre-flight routine provided some sense of familiarity. One final check of the weather, NOTAMs, and any TFRs, and I was out the door. The sun’s rays warmed my skin the moment I stepped outside, sunglasses saved me from the glare, and the upcoming flight consumed my thoughts as I made my way down the road. I had never flown this specific aircraft, the airspace was new to me, and I had yet to meet my instructor in person. But as I navigated the curves of Long Hollow Pike en route to the airport, I did my best to suppress the anxiety and instead focused on my pre-flight routines.

Turning onto Airport Road thirty minutes later, I spotted a few airplanes flying the pattern and made a mental note that I’d be sharing the airspace with other pilots today. After a year and a half of spotting planes from the ground, I was finally getting back in the air.

As I walked into the FBO, the flight instructor flashed a smile, offered a handshake, and we made our way into his office. I briefed him on my history as a pilot, provided copies of my recently acquired Basic Med medical certification and aircraft renter’s insurance, and he looked over my logbook. Anxious to explore the area, I requested that we visit a few airports as we planned the day’s flight, including a grass strip landing—which I had never experienced. 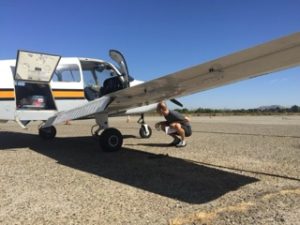 Remembering how to preflight.

After getting acquainted with this particular airplane, I began the pre-flight inspection, which to my relief still felt familiar. I knew what to look for, what was acceptable, and what required a second look. The airplane checked out with no red flags, there was plenty of fuel, and it was time to fly.

Sitting in the left seat, I went through the startup checklist. Just one final item: I hollered, “Clear prop!” and with my feet on the brakes, I turned the key. The engine fired up, and I cracked a smile when I felt the plane do its familiar gentle bounce, perhaps even more eager than me to get in the air. I checked the engine gauges—all green—and everything looked good to fly. Pressing the airplane’s communication button, I self-announced, “Gallatin Music City traffic, Cherokee five one November on the north ramp, taxiing to runway one seven,” and began to taxi.

Holding short of the active runway, I completed the pre-departure checklist and with one final visual check to confirm we were clear, I centered the airplane on runway 17 and applied full throttle. I quickly gained enough airspeed to climb, and before I knew it—and honestly, before I was ready for it—I was turning crosswind. Traffic pattern altitude snuck up on me as well.

“Getting behind the airplane” is a term used to describe those moments when a pilot isn’t thinking far enough ahead, and so far, I was way behind the airplane. After a few rounds in the traffic pattern, I began to feel more comfortable, but it was clear that my previously laid plans for that day’s flight were far too ambitious. There would be no grass strip landing, no getting to know the area. Today’s focus would simply be controlling the aircraft, monitoring airspeed, and maintaining altitude.

By the time the instructor pointed out my waning airspeed on final approach, I had already noticed and was about to adjust accordingly. But I was still “behind the airplane,” and his observation was a welcomed bit of insight. A year and a half is a long break, but I did not allow myself to become a rusty pilot, and I was confident that before long, I’d once again be flying solo. Luke Meek
Luke cemented his love for checklists and routines while traveling the world as a production manager for bands on tour. Based out of Santa Monica (SMO) for the duration of his private pilot training, the fast-paced, high-pressure environment of the Los Angeles (LAX) airspace made for a great training ground. Now flying out of Gallatin, TN (XNX), he loves the budget-friendly rental costs and less congested Nashville (BNA) airspace.

How does an engine “know” when to scare a pilot?
Scroll to top