Blog - Latest News
You are here: Home1 / Article Archive2 / My Adventure3 / A little (local) knowledge is (not) a dangerous thing

Like many pilots, when traveling for work or pleasure and without my plane, I try to integrate new aviation experiences with our travels. In that mode, I’ve been introduced to tailwheel planes, back country flying, mountain flying, pointing it straight up in a Marchetti fighter jet, rumbling along behind a big Pratt & Whitney radial engine, floating over vineyards in a hot air balloon, and Fort Jefferson in the Dry Tortugas under the wing of a float plane, to name a few such adventures. 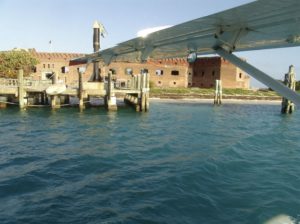 Even on vacation, a pilot usually can’t escape aviation.

Sometimes it is simply fun to fly in another geography, in another’s backyard, in a plane different than the one you know best. You can relax, be a tourist, say all the dumb “wows” you like and enjoy the things you can see from the air that you can’t usually see from the ground. So little is expected of you when you’re in “tourist” mode.

In the summer of 2021, I was able to reap the benefits of one such earlier adventure. It was like getting a dividend on your dividend! Linda and I were on a “ramble” that summer, in Casper, our 1967 M20E Mooney. We meandered from home in the Kingdom (northeastern-most Vermont) down the eastern seaboard to Tennessee to visit her sister and my brother-in-law. In an aviation-related detour, it was on her trip to visit them in Argentina 33 years ago that fate intervened and I met my future bride courtesy of a haphazard travel itinerary that re-routed us to Chile instead of Argentina. Those crazy dispatchers! Each August 25th, we still offer a toast to the former astronaut and Eastern Airlines CEO, Mr. Frank Borman, but I digress…

We had a typical summer trip, dodging cumulonimbus buildups and storms, and had a great time doing so. We managed to always keep the dangerous weather to one side and the good weather escape routes open to the other. We spent a few days in Tennessee with family, and I often hung out at the local ‘drome, Monroe County Airport (MNV).

As at most airports, there was a cadre of congenial folks with whom to swap lies. Finally, we had to leave Tennessee, as our ultimate destination that summer was Wyoming. Dubois, Wyoming (DUB), to be precise. 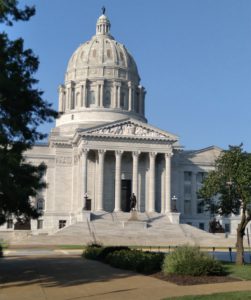 Always take the time to explore the town around your fuel stops.

We made our way westward as per what the weather gave us, generally waiting out the bad stuff in order to gain a window of opportunity to make it further down the road. Jefferson City, Missouri, McCook, Nebraska, and Valentine, Nebraska, were all congenial, sometimes weather-mandated stops along the way. No complaints at all about any of those places. We had a great time in all, exploring Missouri’s capital one evening and then, in McCook, the FBO, J&S Aviation, treated us to their courtesy car overnight and directions to a country club steakhouse that was “top drawer” for dinner!

The next morning, a line of storms was ripping through the area, so we sat tight in the FBO, chatting with some of the jet pilots who’d arrived just ahead of the bad weather. Others were leaving anyway because they could outrun and outclimb the mess outside the FBO window. We, on the other hand, watched the radar to spy our break in the action.

On our last leg to Dubois, we flew at the highest altitude thus far during this trip: 12,000. We were on an IFR flight plan, we had oxygen, and we were comfortable at 12.000 except that the wildfires even further to the west had blanketed the country with a thick, gray, smoky haze. We wanted to get a little lower so we could see the ground and spot our destination airport in Dubois, but the MEA in the area would not permit the controller to oblige. In fact, he asked us to climb even higher for the last 100nm of our route!

At that altitude, I judged we’d not be able to see the ground, and DUB has no instrument approach. I’d seen the airport in Dubois, up on a ridge to the west of town, but that was from the ground about two months earlier, when I’d driven my daughter from Vermont to her job at the Absaroka Ranch, outside of Dubois. That wasn’t enough to help find it from the air this time. 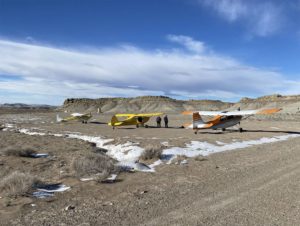 Backcountry buddies on a winter day in Wyoming.

Fortunately, Grace and I had previously spent a few days in the nearby town of Riverton, home of the Central Wyoming Regional Airport (RIW). It was a very interesting few days. We explored the “Rendezvous” grounds, where, in 1838, the last congregation of mountain men from all over the west took place at the confluence of the two rivers, Popo Agie and Wind River. It was in Riverton that I contacted and flew with Art Griffin in his Citabria (orange paint, on the far right) just before he put the plane in the shop to get a “like new” engine.

We flew around the countryside, buzzed a few antelope off a runway or two, and had a chance to practice stick flying a tailwheel plane in some beautiful, new-to-me countryside. Months later, when Linda and I were on our ramble to visit Grace, I spotted that river confluence from the air, and decided that Linda and I would be well served to land in Riverton and figure out our next move from the ground rather than to fly around at 14,000 ft., high over the airport at Dubois with mountains reaching up to us in all directions, and no reasonable way to come down. So, land we did… at RIW.

It was lunch time, and Linda had packed us a picnic lunch, as usual. We munched our lunch and I reached out to Art to just say “hi” and tell him that Casper the Mooney, wife, and I were in Riverton. We chatted for a few minutes and I told him of our decision to land in Riverton instead of pressing on to Dubois. Well, another student and pilot of his had just departed for Dubois only a few minutes before we’d landed. I lamented that we could have followed him to Dubois. True enough, but the visibility on the ground was definitely VFR quality—hazy, but certainly VFR. 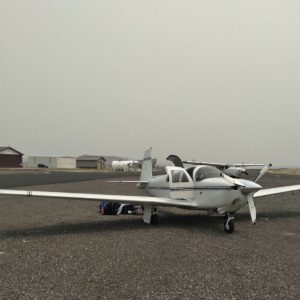 A hazy, smoky day, but a successful trip.

Art was very encouraging that we could take off on runway 28, visually pickup Highway 26 right off the end of the runway, and then follow the road up the valley, along the Wind River, all the way to Dubois and the airport on the ridge a couple of miles northwest from the town. He was confident after having flown with me a few months earlier in his Citabria that this VFR trip was well within my ability, and, if I should lose confidence enroute, our “out” was to simply make a standard rate turn to the right, above the lower terrain to that side of the route, and make our way back to Riverton—if necessary.

With that encouragement from Art, and his injection of local knowledge and confidence, we packed up our picnic lunch and launched into the smoky haze. We picked up the highway in no time flat and dutifully followed it and the river. In a matter of 35 minutes or so, we found and landed at Dubois. Thank you, Art!

It was the perfect application of just the right amount of encouragement and local knowledge, and it made the trip that much more of an adventure for us. We stayed in Dubois for more than a week, some of which was spent repairing a flat tire on the Mooney with the assistance of yet another fine citizen/gentleman/aviator found at this small airport, who also happened to be the airport manager and resident serial airplane builder. But that is a subject for another day. An altimeter tried to kill me