Blog - Latest News
You are here: Home1 / Article Archive2 / I was there3 / An altimeter tried to kill me 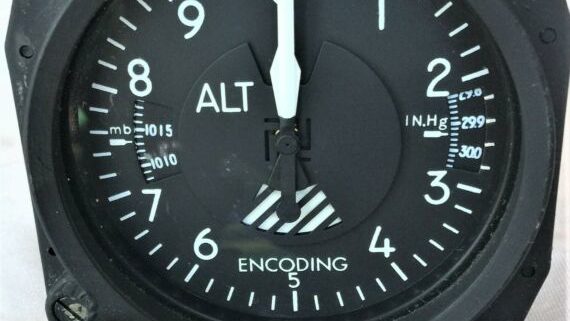 In the late 1970s I was based at Manassas, Virginia. I flew a Piper Turbo Arrow III in my travels for Flying magazine.

The Arrow was due for its 24-month altimeter check. As some shops do, an exchange altimeter was tested and certified on the bench. After that altimeter was properly tested and tagged it was installed in the Arrow and only a simple static system leak check was required to complete the recertification. 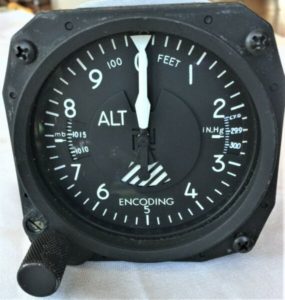 What does “encoding” mean anyway?

The altimeter was an encoding type, meaning the internal mechanism drove an optical device to encode pressure altitude for the transponder to report. With this type of altimeter the transponder would send the controllers the same information that I would see on the face of the instrument. And that was the rub.

The next flight after the altimeter exchange was, as usual for me in those days, out to Wichita. I needed to be there mid-morning the following day so I decided to fly to Evansville, Indiana, the evening before. Evansville was a little more than halfway to Wichita, and there was an excellent FBO on the field, and a hotel a short walk away. A great overnight stop I used often.

I departed near sundown. In those days Manassas was a very basic one-runway field with no control tower. The drill was to depart VFR when the weather permitted and immediately call nearby Washington Dulles approach control for your IFR clearance. Which I did.

The only unusual aspect of the departure was that when the Dulles controller gave me the altimeter setting it was way off what I had dialed in before takeoff. I was sure I had set field elevation into the altimeter as was checklist procedure. There were no automatic weather reporting stations then, and weather observers who could provide an actual altimeter setting were confined to larger airports like Dulles, or to some remote fields in the hinterlands where the weather service needed observation data.

I blamed the big change in altimeter setting I received from Dulles on myself for mistakenly setting the wrong field elevation before takeoff. It was my last and only chance to have prevented the near disaster that was ahead.

It was a great evening for flying IFR. I was on top of a solid overcast nearly all the way to Evansville. The air was smooth and frequencies quiet and perennial headwinds rather light.

The overcast at Evansville was just above visual approach minimums and the controllers cleared me to 3,000 feet and provided a vector directly to the airport. I popped out of the clouds before reaching 3,000 feet into clear night air. Jeez, the ground looked close. I brushed off the sensation as normal after spending a couple hours in the dark, out of sight of anything on the ground.

At the time there was a bunch of strip mining activity in the area and the enormous shovels that dug up the earth all had red obstruction lights. I flew past one of those lights and it looked really close.

A little panicked, I started looking around at other lights and towers and realized I wasn’t anywhere near the 2,500 feet above ground I should have been with the altimeter showing 3,000 feet. I spotted the airport and flew over to intercept the ILS and track the glideslope to the runway. When I landed the altimeter showed I was more than 1,800 feet above the pavement.

The next morning the altimeter showed the Arrow sitting more than 3,000 feet above the ramp elevation. If the weather conditions had been worse I could have flown into something with the altimeter showing me precisely at a safe altitude.

In some ways even more alarming, I had flown hundreds of miles in the dark at some unknown altitude under IFR. The separation the controller thought I had from other traffic was mythical. Because it was an encoding altimeter, the transponder sent down the same information it showed me on the altimeter dial. We had both been doing our jobs perfectly with unknown separation from other traffic. 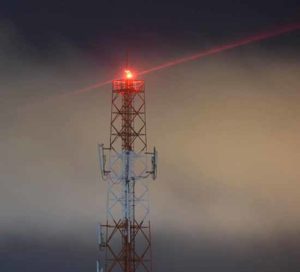 It’s a bad sign when you’re looking up at a red obstruction light.

TCAS collision avoidance systems didn’t exist then, but even if they had, they would have offered no protection because they rely on the Mode C altitude reported by nearby traffic to detect a collision threat. My transponder would have been reporting a non-threatening altitude when who knows what my real altitude was.

The altimeter has occupied a sacred place in basic instrument flying. It’s the only one in the “six pack” of instruments with no backup. No combination of the other five instruments can reveal your altitude in the way comparing the others can cross check on their function.

Larger airplanes have two altimeters so if they disagree you can be alert to a problem. Jets have three altimeters so you can compare and ignore the odd man out. But in light airplanes most of us flew blissfully along believing what those three hands on the altimeter dial showed us.

The situation is better now for several reasons. First, encoding altimeters are virtually all gone. The extra friction of moving the encoding system as well as the instrument hands on the dial doomed them to a relatively short life because of hysteresis so they couldn’t pass the 24-month check.

Development of low-cost digital electronic pressure sensors brought the price of blind encoders—so called because they don’t display their output on an instrument—down to a few hundred bucks. With a blind encoder, the controllers will see something different if your regular altimeter fails because they are not connected in any way. You may not know why there is a difference between your altimeter display and Mode C the controller sees, but you will be alerted rather than flying along fat dumb and happy as I did on that night.

The digital electronic altimeters that are part of the primary flight displays and other electronic instruments so many of us now have in light airplanes are not immune to failure, but they have a decent level of monitoring. You’re likely to get a flag warning if something goes wrong.

And most fundamentally, at its root ADS-B transmits a GPS measured height. In any system I’ve flown you can use menus to find that ADS-B altitude info, and equally important, the controllers can see that independent of your Mode C.

But, back in the bad old 1970s we had none of those stay alive advantages. So I bought a high quality, pocket-size altimeter built for the hiking/climbing market. For years when at cruise in a non-pressurized airplane I’d pull that thing out, set in the current baro, and compare its reading to the altimeter in the panel.

Never did a see a significant discrepancy between that little altimeter and the real one. But on that night I learned it only takes once. If I hadn’t been so lucky I wonder what the NTSB probable accident cause would have read. Pilot error, no doubt.

One in a million: a chance aerial encounter in Laos