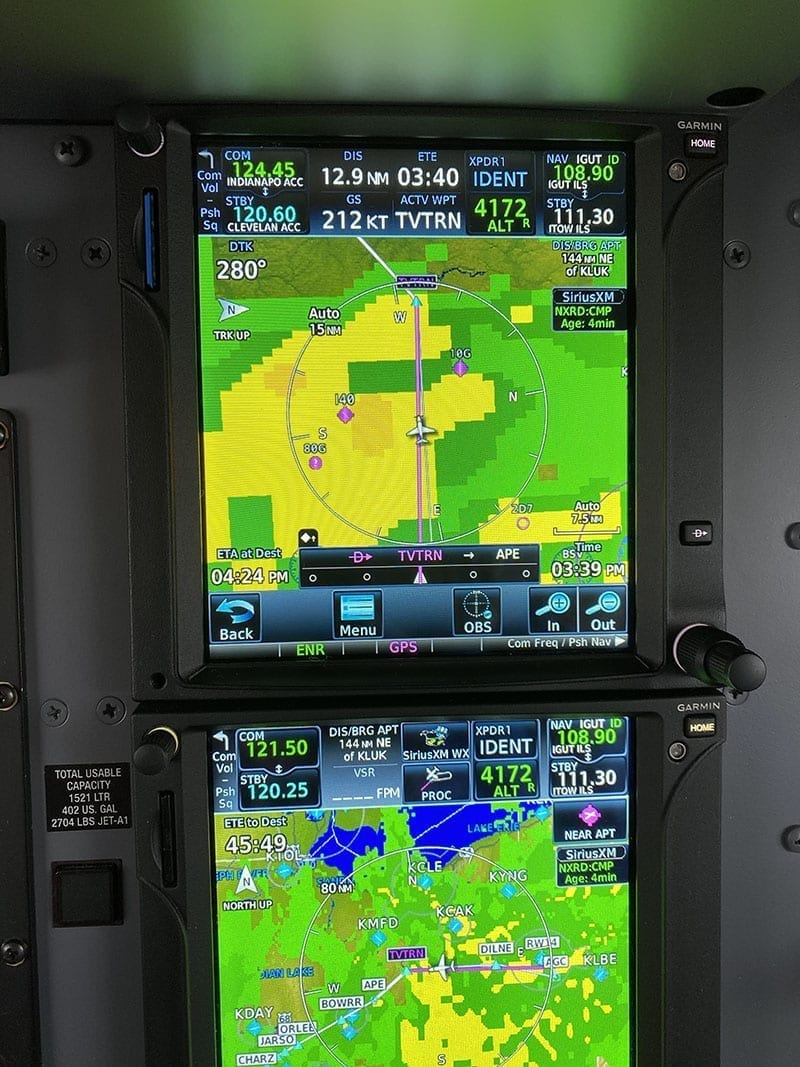 Having near real time Nexrad weather radar display in the cockpit has changed the way many of us fly more than any technology I can think of since the introduction of GPS. But that Nexrad image is not an absolute guide. There are no signs pointing “go here” but “don’t go there.” The Nexrad radar image demands interpretation by pilots.

What does Nexrad see?

When you see a return on your Nexrad display, you can be pretty sure you’re looking at some form of precipitation. But not certain.

The huge Nexrad ground stations are designed and optimized to detect precipitation in all its possible forms. The Nexrad radar beam is transmitted, and if it hits raindrops or other precip, some of the energy is reflected back to the antenna. That reflected energy is what we see displayed on the screen in the cockpit. 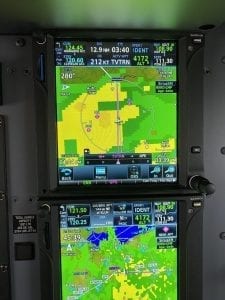 But no matter how precise the Nexrad radar is, it can be fooled by a number of phenomenon showing a return that is not precipitation. This is called anomalous propagation, or AP for short. The return is anomalous because it is not the intended target, which is precip.

If you’ve flown much with Nexrad in the cockpit you’ve no doubt seen AP. There will be a return on the radar—almost always level one green—but there is no precip there. Maybe not even a cloud. The air is clear.

AP can be caused by terrain features reflecting the radar beam, or even by strong inversions in the atmospheric temperature. AP typically comes and goes: it’s there on one download of the Nexrad mosaic and gone on the next. If the weather around you is good, you’re seeing AP.

Another potentially confusing aspect of the Nexrad display is the way the radar can scan the entire column of air. Instead of peering out with only a narrow beam as old fashioned radars do, Nexrad can scan vertically as well as horizontally so it can detect precip in the whole airspace of its coverage area.

That means Nexrad can “see” precip at elevations that may be well above or below your altitude. Much light precip never reaches the surface as it falls into dry air and evaporates, so you can be flying through a large area of Nexrad return and never have a drop hit the windshield. You can also be in the clear above Nexrad returns.

We can’t see the height of a Nexrad return in the cockpit, only its horizontal dimensions. That means we need to gather as much information from other sources as possible to decide whether a deviation around a return, particularly one that is almost entirely level one, is warranted.

If you’re flying VFR, the Nexrad image is useful as a long range planning tool. But the only thing that really counts under VFR is what you see out the windshield at every moment, no matter what Nexrad shows. For the pilot flying IFR, what we really want to know is where is the turbulence? We can handle some rain and clouds, but it’s convective turbulence that can break any airplane under the wrong conditions, and certainly cause any of us to possibly lose control, that must be avoided.

By a happy coincidence of Nature, convective weather contains a radar signature. It’s the size of rain drops, and how many there are. And that’s what radar, particularly Nexrad, is good at detecting and displaying.

As we all remember from private pilot ground school, convection is fueled by water. The cooling and evaporation of moisture propels the up and down drafts that feed the convection process that grows into thunderstorms. Carrying moisture up and down rapidly creates big rain drops and lots of them. And that heavy rain is a perfect radar reflector, so it shows up on Nexrad as level three (red) intensity, and may show as level two (yellow) returns during storm formation and growth.

Most level three returns indicate convection, and thus significant turbulence. But not all. In the subtropical regions, very heavy rain showers can show up as level three but involve little turbulence. On the other hand, areas of level two (yellow) return can indicate a building convective cell with lots of turbulence before the rains drop size and rate have become enough to trigger a level three return. How can you know what you’re seeing?

The first item to consider is the lightning display that is part of most satellite weather services. If there is lightning showing anywhere near a Nexrad, return you know convection is present, because it is the friction of up and down drafts that creates lightning. 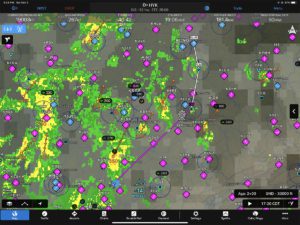 Lightning and gradient are important ways to confirm whether a cell is convective or not.

But the lighting we see displayed in the cockpit is only a small fraction of all storm-generated electrical activity. The ground-based lightning sensors primarily detect vertically oriented strikes, not cloud-to-cloud activity. The vertical strikes tend to be the most powerful, so are a positive indication of significant convection. But intracloud and cloud-to-cloud lightning is the big majority of discharges and is often present before the storm generates the force for strikes to and from the ground.

So, a red return probably marks convective activity. Lightning displayed certainly does. But what else can we look for? There are two major considerations—the overall atmospheric conditions, and the gradient of the radar return.

It’s important to know the broad weather conditions in the area when you look at a Nexrad display. Are you near a front? Is the air unstable overall? Is there lots of moisture available to feed convection? Did the forecasts call for a chance of thunderstorms? If the atmospheric conditions are ripe for convection and you see level two and three returns, watch out and stay away.

The other generally reliable radar indication of convection is the gradient of the radar return. What gradient means is over what distance does the display go from green, to yellow, to red? And especially to magenta if your system shows four levels.

When you see a display that has very little green surrounding a display of level two and three, that’s a strong indication of convection. When severe storms are detected there is often a mere outline of green and yellow around the red, especially on the side the storm is moving toward.

On the other hand, when you see very broad areas of level one and some yellow, or even red, showing up here and there, that is not at all likely to be a convective situation. Thunderstorms can grow imbedded in areas of lighter precip, but they will typically show a steeper gradient around the stronger returns.

Again, that’s why it’s vital to know the overall weather conditions. If the air is unstable and possible convection is in the forecast, even large areas of level one with shallow gradient to some yellow can contain building cells that probably won’t break the wings off, but will make you wish you were somewhere else.

How old is my Nexrad picture?

Though satellite to the cockpit weather is great, it’s not quite real time. And that time stamp that many systems show since the most recent Nexrad image arrived can be misleading. 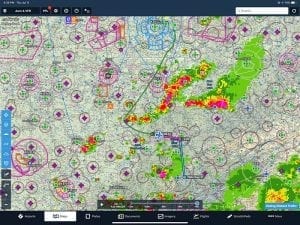 Monitor the time stamp, but remember it doesn’t show the entire delay—sometimes you just have to go around.

This delay in what we see compared to when the radar scanned a parcel of air is called latency, and it begins with the Nexrad station. Because the Nexrad scans vertically and horizontally, looking in great detail, it takes five to six minutes to complete a 360 degree scan. That means it can be six minutes since the radar scanned the piece of air you’re flying in right now. And when the convection is popping, six minutes can change the up and down drafts—thus the turbulence we experience—a lot.

But the accumulated delays are even longer. What we see in the cockpit is a mosaic of the scans of overlapping Nexrad stations. The companies that create the mosaics use an algorithm to assign which “bin” in the mosaic picture will contain data from which ground station. The ground stations are not synched so different areas of the mosaic image may have been scanned earlier or later between the issuance of a new mosaic.

So, when you add in the time needed to make the mosaic, and then get it in the queue to transmit up to the satellite, the delays from when the radar actually scanned a spot and when we see it are on the order of 10 minutes or more. Even when your system shows the new Nexrad image was downloaded only a minute or two ago.

The latency isn’t an overwhelming deficiency in Nexrad use so long as you don’t try to use the information for close in avoidance. Missing a threatening Nexrad target by 25 miles makes sense because movement and intensification during the latency period probably won’t be a factor. Trying to avoid a radar depicted cell by a few miles could lead to disaster.

Nexrad can send you deviating around areas of rain aloft that never touches the ground, or your airplane. But it can also show you a path between cells that has closed up since the radar scanned that area. Nexrad is the best weather avoidance tool we’ve ever had, but it still takes pilot knowledge and judgement. Come to think of it, what part of flying doesn’t?