Blog - Latest News
You are here: Home1 / Article Archive2 / I was there3 / An island farm is a good place to land

Sometimes on a cold, very blustery day, when flying is an option only for the “big boys,” I like to look back through my logbook and daydream about some of the places I’ve flown. One such entry that triggered memories is a place that is within easy reach of many in the Northeast. It is Klenawicus International (49NY) on Shelter Island, a small speck of land nestled between the two eastern forks of Long Island. 49NY is a 2,100 ft. grass strip with an unfortunate dog-leg at the southern end and downward sloping terrain if you land from the north heading south. 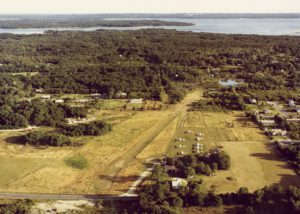 A simple runway, but with much to offer.

I knew this place only as “Klenawicus International Airport” back in the 1970s and 80s. Initially I thought it was a family joke! However, I came to learn that Frank K owned the farm and had an interest in planes. I didn’t know him well at all (my loss, I’m sure). My mom, Zee, and her husband, Dave, lived in Dering Harbor on Shelter Island and they had a passing acquaintance with him, enough so that I knew to leave a jug of wine on the doorstep in lieu of any landing fee. Things were simpler then.

Before I flew on my own, I had a friend with a 1976 Cessna 177 Cardinal, N13162. We’d fly into Klenawicus International to visit my family, who lived nearby. Living on an island is just different than living, well, elsewhere. If you’ve lived on an island (Manhattan doesn’t count) you know what I mean. There’s always “island time.” Islands often seem like an end game for some, and the end-of-the-line for others. On an island ambition is, by popular agreement, attenuated.

For example: since 1980, there’s been a running race called the Shelter Island 10K/5K Run Walk. At first, there was scant participation. Nowadays, if you don’t register early, the roughly 2000 running spots will be quickly sold out. Runners now often include famously fast international runners from African countries, supporter Bill Rogers (of Boston Marathon fame) and a host of other elite runners.

My friend and I (the one with the Cardinal) used to fly in for the event each summer. On the island there were very few places to eat or shop—after all, it is a tiny island. The one place to get a pizza was called Nettie’s. In the best of times, it took quite a while to conjure up a pizza at Nettie’s. You might think the Nettie would step it up and try to “crush it” by selling a ba-zillion pizzas on race weekend. Maybe borrow another oven to really crank up sales?

Nope. Island time says otherwise. Nettie’s closed the doors on Friday for Race Weekend and took the days off to enjoy the race with everyone else. It simply wasn’t worth the aggravation of dealing with the demands and expectations of the hordes of off-islanders. That’s the best example of “island time” I can offer.

During our summer visits to Shelter Island by plane, we’d often wait until late in the day to leave, when things had cooled down enough to give us a (much) better than 50/50 shot at clearing the trees at the south end of the field. Watching us depart, my mom knew enough to cross her fingers. She also held her breath until we cleared the trees, banked gently to the left (eastward) and then again to the north for the one-hour flight home. My buddy, his Cardinal, and I never had a problem going in or out of that pleasant little grass strip. 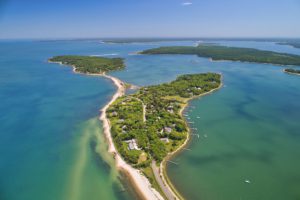 A beautiful place to fly in the Northeast.

Years later, when I had learned to fly a little on my own, I went to Shelter Island on occasion with a 1981 Cessna 182 Skylane, N9130H. More powerful and a little heavier than the Cardinal, it was the landing that sometimes crossed me up. Early morning summer arrivals were a challenge for two reasons: wind and wet. I recall coming in one day with a passenger and friend visiting from Scotland and an ever-so-slight tailwind from the south. I picked the tailwind over the headwind because it gave us an uphill landing. That darn plane just wouldn’t settle down and we floated and then slid a very long way down the runway on the early morning dew on the grass, somehow keeping the nose pointed straight ahead.

We came to a stop just a couple of feet before the stone wall that marked the side of the road and the very definite end of the airport runway environment—otherwise known as Burns Road, the public roadway at the northern perimeter of the field. My passenger was a very experienced flyer, albeit in “heavy iron” as a flight attendant for Sir Richard Branson’s upstart Virgin Atlantic. After we came to that oh-so-exciting sliding stop, she looked at me sideways and said with that taunting, Scottish accent, “Would you like to apply for a job?” That’s as close as I came to an airline career.

Back to that cold blustery day on which flying wasn’t much of an option for me, I wondered how Klenawicus International had fared over lo’ these many years. I am happy to report it is a story with a happy ending. It appears to have grown a real pilots’ organization, SIPA (Shelter Island Pilots Association). They co-exist with a radio-controlled flying club next to the field. There is still a flying machine registered to a person with the surname Klenawicus on the field. There are many more planes registered on that field now (10 to be exact) than when I flew in and out of there. They have a Facebook page (OMG!). You can even see a Mooney departing Klenawicus International on YouTube:

Read about the stewardship of the airport on Shelter Island and you will see what a valued resource and asset this airport is perceived to be by those closest to it. On the other hand, it is still the kind of field where you can have a (minor) mishap and it stays among friends rather than becoming fodder for the 6 o’clock news or the local rag. Indeed, things were simpler then.