Blog - Latest News
You are here: Home1 / Article Archive2 / I was there3 / There’s a reason we use checklists

Something just isn’t quite right. At the time I had that thought I was not sure why I would be sensing that. I had arrived a few moments earlier. As I drove up I noted that my T-hangar neighbor was finishing a preflight of his own. He looked up from whatever he was doing as I was parking and we exchanged waves. His unit was behind mine, but our dividers were an open wire fence material and we had become airport friends over the past couple of years. Bill is a bit older than me, a retired schoolteacher and high school football coach, an experienced pilot, and a great conversationalist.

It was a typical crisp, sunny, fall Saturday morning. The sky was blue, the clouds were high in the sky, and I had arrived at my local non-towered airport in central Oklahoma. My mission that morning was to simply take advantage of the beautiful day and fly as long as I wanted to spend money on a load of avgas. And if the day was going well, perhaps two loads of avgas!

I went about getting the doors open for my hangar and started my own preflight routine. A few minutes later I heard his large Continental fire up and settle into the deep rumble of a warmup. A typical Saturday morning. By this time, I had pulled my airplane from the hangar as Bill advanced the throttle and began moving from the hangar area to the taxiway. I glanced over and I had this impression that something wasn’t quite right. I didn’t see or hear anything to reinforce that impression and I turned back to my own task at hand to continue the preflight of my plane.

As Bill’s plane pulled onto the main taxiway and started to move to the opposite end of the runway for departure, I glanced over and again had a sense that something just wasn’t quite right. I walked a couple of steps away from my plane and closer to the taxiway. Bill’s white and blue low-wing plane was now 100-150 feet away. I started listening and looking more closely. I could hear something—it wasn’t his engine; it was something else. 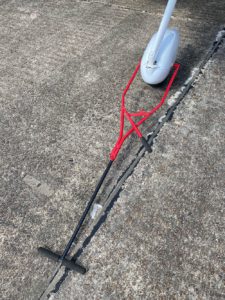 So easy to forget if you are distracted or in a hurry.

I started scrutinizing his airplane from the tail forward. Everything looked okay—but I could hear a faint, intermittent clanking sound. I didn’t see anything that looked suspicious with the fuselage, wings, or front cowling. As I watched the plane pulling away I was now viewing it from the rear-quarter line of sight. Again, I heard the clanking sound and looked through the tall grass closely at his retractable landing gear: I saw what was making the clanking sound.

And I knew that not only was something not quite right, I needed to stop Bill from taking off.

I had not yet powered up my electronics or even hooked up my headset to make a radio call. Instead, I jumped into my Jeep and quickly moved over to the taxiway. Bill had made it to the end of the runway, and I could see he had stopped for a moment on the taxiway turn-in for his runup checks but was now moving to turn onto the runway for departure. As I sped toward him on the taxiway I was flashing my headlights, hoping it would get his attention.

It did—and as I got within easy visual range I did a cutting motion across my throat a few times, hoping he would realize he needed to cut his engine. He did. I pulled over onto the runway adjacent to his plane and got out of my Jeep. Bill was doing the same with a perplexed expression.

I didn’t say anything. I didn’t have to. Bill was looking at his front gear and then looked up at me. He had a nice, heavy-duty towbar for moving his plane. It was still connected to his nosewheel. He disconnected it and stood there for a moment, then carried it over to his plane. I got back into my Jeep and drove to my hangar, parked, and resumed my preflight. Bill taxied to his hangar space, shut down, put his tow bar away, then came over and said thanks. I shrugged—it could happen to anyone. We shook hands, and I got into my plane, started up, and continued with my morning mission.

It wasn’t as fun as I planned it to be—thoughts of what might have been with that tow bar at takeoff were in the back of my mind. As I was flying, still on the local area frequency, I heard Bill give his takeoff info and he departed for his planned trip. I flew a couple of hours then came back to the barn and called it a day.

I was reminded of what my instructor had told me over and over—there is a reason why we have a checklist. I’d had a couple of “oopsies” myself. Nothing serious, so I could relate to Bill having one as well, but I remembered my instructor, Joey from First Landings Aviation in Florida, telling me this is why we use them. I was glad I had noticed something wasn’t right. I know Bill was, too.

The (unofficial) rules of flying