Blog - Latest News
You are here: Home1 / Article Archive2 / I was there3 / What a difference ADS-B In makes—or does it?

I recently moved a friend’s airplane from the Nashville area to Minnesota. Not just a normal, been-around-the-block-a-few-years airplane, but a brand new airplane with all the latest Garmin glass cockpit electronics and technology. What a beautiful plane!

When I was doing the pre-flight and confirming the setup, I noted that there was no ADS-B In screen. Further investigation, even getting on the phone with the Garmin support reps, determined that the aircraft—ordered, bought and paid for with ADS-B Out and In—only had the Out configuration. 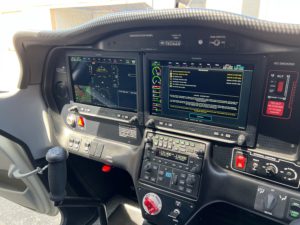 Now for many that would be no big deal. A VFR cross-country flight with a fully capable (if minimum requirements) airplane, with or without ADS-B In—no big deal. But (and there is always a but, isn’t there?) I had not flown an aircraft without ADS-B Out and In over the last five years. So even though I was not crossing any major airspace on my trip once I departed the Nashville Class C, I would not be able to rely on an ADS-B In instrument readout for adjacent traffic awareness.

My comfort level over the last five years for knowing what else was out there had become very dependent upon the In screen on my PFD. For this trip, good old fashioned scanning was my only visual clue, although I was utilizing ATC flight following.

Of course, instrument-based reliance is only relevant if the adjacent traffic is ADS-B equipped (or Mode C and rebroadcast from ADS-B ground stations). The reality for my flight plan was that my route covered areas where, for the most part, no one was required to have ADS-B. I’d be under 10,000 feet so Class E airspace issues were relevant only if I was flying over any Class C or B airfields—and I was not. I’d be far outside the Mode C areas for any Class B airfields, so my route would be in non-controlled Class G airspace except when transiting the Class E making fuel stops. And I was doing those stops only at Class G airfields and ADS-B Out is not required for those transitions.

So even if I had the In capability, would that really tell me the potential risks for other aircraft? After all, everybody has ADS-B by now, don’t they? I did some checking at the FAA website: the results might surprise you.

The requirements for ADS-B are fairly well set: if you fly within Mode C, Class B or C, above Class B or C airspace up to 10,000 feet, or at altitudes of 10,000 feet or more, the airplane must have an operable ADS-B Out system. But if you do not fly in those areas, you are not required to have ADS-B. If you have an In capability, in addition to ADS-B Out telling the network where you are, you can see the local traffic for Out-equipped aircraft. Any traffic using a Mode C transponder, if linked to the ground system and radar, will also show on the In screen as well as the graphical weather updates.

Fortunately, most GA airplanes are now equipped with ADS-B. As of  June 1, 2022, the FAA data indicates 103,556 fixed wing GA aircraft are ADS-B compliant, out of roughly 161,000 active airplanes. But these numbers do not include some 35,000+ airplanes in the Experimental or non-certified LSA categories. And if many of these aircraft are only operated in the non-required airspace areas, chances are a sizable percentage do not have an Out capability.

As to my mission—fly a brand-new airplane (which was really cool) to my friend in Minnesota and don’t hurt the plane in any way—it went well. The flight up from Nashville had some weather challenges, with stronger than expected headwinds requiring an additional refueling stop. And I was constantly in scan-mode, more than I probably would have been in my own Out and In equipped aircraft, looking for other traffic throughout the flight.

When I reached my destination airport, a non-towered, cross-runway airfield which is also home to a major university aviation program, the visual scanning part did get a bit busy. Easily 6-10 students were doing pattern work or practicing ILS approaches. I could hear them on the radio, I could sometimes see most of them, but I could not get that instant image on my PFD of the bogey locations relative to me that I was used to. No worries—I did what I was trained to do before ADS-B was required, made my local traffic radio calls, slipped into the pattern, and landed my friend’s plane at its new home. Mission accomplished. 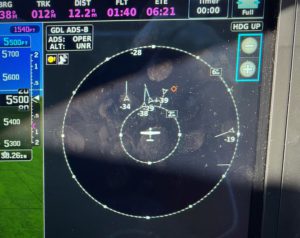 Does this screen lull you into complacency?

I did come away from the flight and flight planning with a few items to think through. Had I become too reliant—and presumptive—that my ADS-B In display was telling me all I needed to know about surrounding traffic? Had this reliance actually made me less safe as a pilot when I was in airspace where ADS-B was not required? Would I now, upon reflecting on the first two questions, become a more aware pilot in all airspace than I had been?

I also wondered about the risk to non-equipped pilots, whether flying without ADS-B In, or without ADS-B at all. In the old days before 2020, everyone was—or was supposed to be—looking for each other. If pilots used to flying with ADS-B In have a bit of complacency and over-reliance on their displays, are they looking as diligently for the other guys as the other guys are probably looking for them?

I do have a renewed appreciation for the benefits of ADS-B In. When you do not have a capability you are used to, you realize why you want that capability. Whether or not all of the bogeys in my area were ADS-B compliant, wherever I am flying, at least I knew where the ADS-B equipped folks were. Having that information, in my estimation (and according to the research) does make me a safer pilot, with the recognition of non-equipped aircraft. Many times I’ve been given a traffic alert by ATC of converging traffic and I cannot think of a single instance where the other aircraft did not show up on my ADS-B In screen, whether I got eyes on them or not. My awareness odds are a lot better as a result, and I like that.

Wherever we are flying outside of the ADS-B mandatory areas, we cannot discount that percentage of non-equipped GA aircraft, and who knows what percentage of Experimental and non-certified LSAs; they might not show up on traffic screen. But it’s a big sky, and vigilance with scanning for traffic remains the answer for any VFR flying conditions—not relying solely on the ADS-B In display. One green light, and a near disaster