Blog - Latest News
You are here: Home1 / Article Archive2 / I was there3 / One green light, and a near disaster

It was a late winter night in the western Eifel mountains of Germany. A thick, black fog silenced every sound, and you could barely see the glasses on your nose. It was the right weather for night air defense alert duty at Bitburg Air Base. After all, who in Ramstein headquarters command post would be crazy enough to approve a scramble into this kind of weather? The weather was so bad that my guess was the nearest alternate was somewhere in Africa or Nova Scotia. I preflighted my F-4E in the concrete shelter, readied it for an air defense scramble, and then found my way back through the fog to settle down for a night of popcorn and movies. I turned in around midnight. 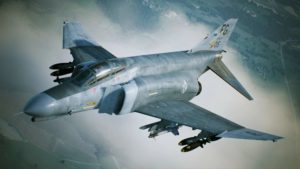 The F-4 is a capable airplane, but it does burn fuel—which limits options on a foggy night.

I don’t remember much after hearing the Klaxon at zero dark 3 am or anything else, until I woke up to a 25-degree deck angle. My Phantom was climbing through 20,000 feet. Who was the idiot that did this to us? Then I began to settle down. I leveled off and was given a vector toward East Germany. My focus was on the instruments and the intercept, but my thoughts were on fuel, alternates, and getting home that night. The only rationale for a launch in that kind of weather was East German-Russian “Bluff,” an Air Force generals’ game of Friday night air power. We were the dynamic part of their Cold War game.

There was just enough fuel for an approach at Bitburg Air Base and a diversion due to the weather at Solingen. Bitburg weather was variable, reported visibility of one-quarter of a mile or less in the thickest, blackest fog I can remember. The GCA controller was steady, calm, and professional, and that helped. We all were going to earn our beer money that night. The controller kept me on course and the glide path all the way to minimums. I flew the final approach as slow as I could to have the precious moments I would need to see the runway lights. I looked over the right side just before minimums. It was still there, the blackest night I have ever experienced. I couldnʼt see anything, not even the wing lights.

A moment later at minimums, I looked over the left side and saw one faint green runway threshold light. That one light was all I needed. I continued the descent, which took us into a zero-zero fog bank. It seemed a lifetime until we touched down at 160 knots, and moments later the dim runway lights started to appear off the left wingtip. Everything after that was routine except I realized that we had landed with the left landing gear close to the edge of the runway. It was odd to see the dim runway lights passing so close to the left wingtip.

My back-seater was just as relieved as I was to be back on the ground and eager to break the silence and tension. He nonchalantly observed that we had somehow landed on the left side of the runway instead of at the centerline. I replied with a casual observation that this was the reason they make runways so wide. I had no other answer for him or anyone else about why we landed so far to the left side of the runway. 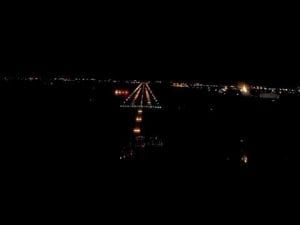 Those lights can help, but they can also confuse.

Going back into the zero-zero fog after minimums could easily be explained because of a small valley just off the end of the approach runway. Could the GCA radar centerline have been a little off to the left? I did not question my judgment or my skills. We were in the hands of Mother Nature and our faith. I remembered the fog during taxi and takeoff during our RTB and descent back to Bitburg. I was glad the F-4E had such a short takeoff roll during the near zero-zero conditions. All I could do was my best on the approaches and then make the right decision about where to run out of fuel and eject, at Bitburg or at the alternate. All Europe that night had variable visibility, a quarter of a mile or less in fog. But why did we land on the left side of the runway?

It was years later I made a connection between the “moth effect” and that one green runway light. Humans, like moths, will steer toward a light source. I suspect it was the only thing I saw outside the cockpit, so I must have steered toward the light. Would I have resisted that tendency to steer left toward the light had I known about this type of hazard? I think yes. Knowledge and being aware of all aspects of flight prepares a pilot for all situations, especially those that come only once in a lifetime of flying.

We called their bluff that night. We have a rich history of examples such as this one; when added together they are a part of how and why we won the Cold War. But I came about 20 feet from a different outcome. It could have resulted in an aircraft mishap or worse. We could have landed off the left side of the runway. If that had been the consequence, it would have been because of one small but essential bit of information that was missing from my formal training as a pilot: all the hazards associated with the “moth effect” and especially those associated with a low visibility approach and landing at night in dense fog.

How to improve your aviation decisions