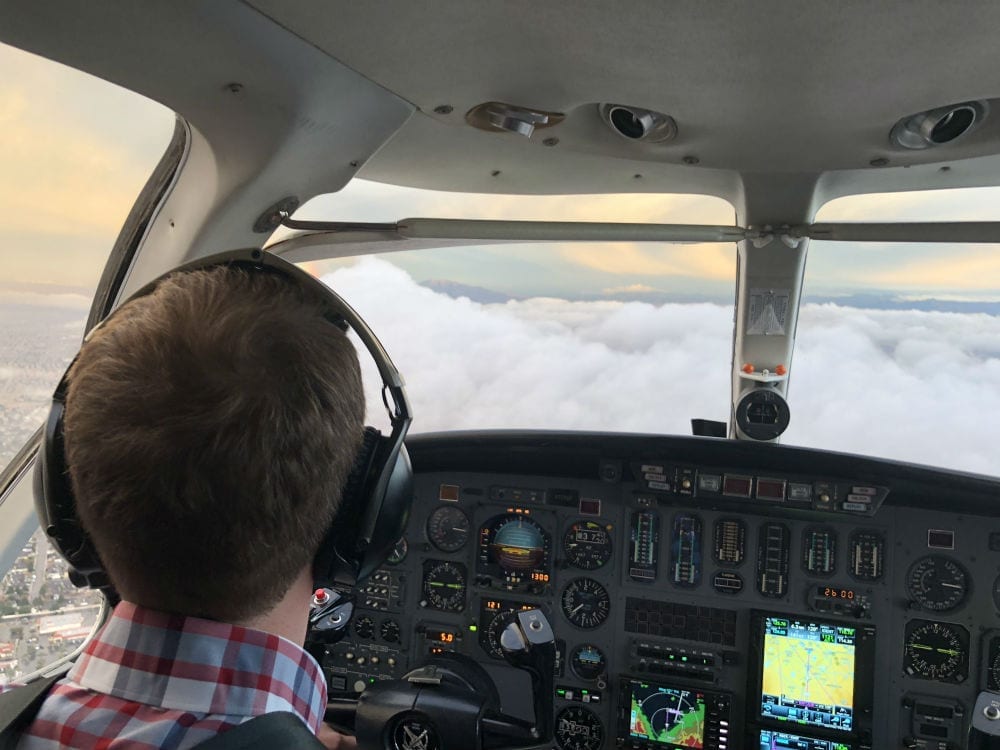 At some point in a pilot’s flying career, usually around 250 hours, the primary challenge shifts from a physical one to a mental one. When you finally master crosswind landings and learn how to use all the avionics in your airplane, what’s left is the never-ending task of making good decisions. Astronaut Frank Borman suggested an appropriate goal when he said, “A superior pilot uses his superior judgment to avoid situations which require the use of his superior skill.”

The FAA got religion on this a few decades ago and has been integrating what they call “aeronautical decision-making” into all parts of pilot training, from the Knowledge Test to the Airman Certification Standards. The topic has a chapter in the Pilot’s Handbook of Aeronautical Knowledge and an entire Advisory Circular (AC 60-22) is devoted to it. As you might expect, much of the FAA’s advice quickly devolves into jargon: use the PAVE checklist and the 5 Ps to inform our SRM and CRM practices, which include RM and AM, to maintain SA and prevent CFIT. You get the idea.

But it’s not all acronym soup; the PHAK contains this essential truth: “Contrary to popular opinion, good judgment can be taught.” That’s great news, but how? 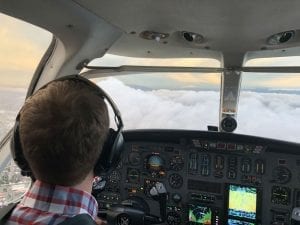 You can move the controls; can you make the right decisions?

To begin, we should acknowledge some unpleasant facts about the human mind and how it operates. Unfortunately, even a casual review of neuroscience makes clear that, for most of us, good decision-making is the exception and not the rule. Our mind is working against us all the time, so a good flight probably means combating some bad instincts. Consider the following shortcomings.

We are not rational creatures. Homo sapiens evolved to survive on the savannah of Africa 150,000 years ago—a radically different environment from the cockpit of a small airplane. That means most of our time-tested mental models do not work very well at 150 knots and 10,000 feet, so our “gut feel” isn’t always trustworthy. We tend to seek comfort instead of ruthlessly pursuing the truth, which might help us sleep at night but does not help us evaluate whether the weather up ahead really is worse than forecast. It’s just plain hard work to evaluate the facts calmly and impartially.

We’re bad at judging risk, especially small or large ones. This is apparent in many parts of modern life: we fear nuclear power plants even though coal has killed far more people, and plane crashes get all the attention while 40,000 people die every year in car crashes. Again, this is no surprise—Stone Age man needed to worry about rare but potentially deadly events. Is that a bear or a shadow? Evolutionarily, it’s better to assume it’s a bear, but that doesn’t mean it really is. As E. O. Wilson memorably wrote, “We have Paleolithic emotions, medieval institutions and godlike technology.” He wasn’t talking about pilots, but it certainly applies.

We have incomplete information. Flying (and life) isn’t chess—there are far too many variables to know all the available options and rationally calculate the probabilities for each one. We inevitably have to make educated guesses based on fragments of data or biased opinions. That’s not a problem that can be solved, it’s just a reality to accept.

We use dangerous mental shortcuts. As a result of this information overload, we adopt heuristics to sort through the noise and make decisions on the fly. Some of these are good (searing pain is bad), but many are not (sugar is always good). For pilots, confirmation bias and motivated reasoning are the worst shortcuts, since they often lead us to find only the information that makes us feel good. This is how VFR-into-IMC happens most of the time: you fixate on the one good METAR and ignore the 20 bad ones.

We struggle to sacrifice short term pain for long term gain. Anyone who has ever tried to stick to a diet knows how true this is. The option to delay gratification is a fairly recent development in human history, so it takes work to stay focused on the long term. When we try to stretch our fuel, we are avoiding the short term inconvenience of landing at the expense of potential long term disaster in the form of a crash.

We craft stories. Our brains love to fit events into a narrative and assign characters—it’s how we make sense of a confusing world. Unfortunately, life is often pretty random so this reasoning leads us astray when there is no plot to figure out and history has no arc. We don’t deserve good weather and ATC isn’t out to get us, no matter how compelling that story seems.

We have the illusion of control. Another coping mechanism for a scary world is to pretend we are in control of events, even though we’re probably just along for the ride. As a pilot, we shouldn’t assume we have control over weather or mechanical systems just because we are thinking about them. For example, while a thorough preflight is good, the cylinder doesn’t know we really care this time and can’t afford an engine failure.

After that depressing list of mental shortcomings, it may seem like good aeronautical decision-making is hopeless. But that would be meeting irrationality with further irrationality. A careful look at the facts (that’s our goal here) shows that it is possible to make smart choices more often. 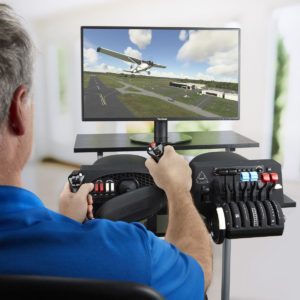 One thing to practice in a home simulator is decision-making.

Practice making decisions. This is blindingly obvious but often overlooked. If you want to get better at something, you should practice—and deciding is no different than piano or basketball. A great place to start is by keeping a decision journal to record how you approach major choices and then track how well you do. This might seem silly, but if you don’t write it down, you’ll probably lie to yourself. The good news is you don’t have to be flying every day to do this; you can plan a flight, decide how you would handle it, then check conditions a few hours later to see how it turned out. An iPad app or home flight simulator can help too. Was your go/no-go decision correct? Are you getting better over time? Unless you keep track, you’ll never know.

Be skeptical of your gut instinct. Like an instrument pilot who has to learn to trust the instruments, we have to learn to trust the facts, no matter how uncomfortable they are. It’s OK to listen to your gut, but always confirm. As Julia Galef writes in her book, The Scout Mindset, the goal should be to see the world as it actually is, not as you wish it were. Here again, a decision journal may help: if you discover that your gut feel is often wrong, you might be more humble in the future.

Make more decisions ahead of time. Pilots are typically a lot more rational before a flight, at 1G and zero knots, than they are in the heat of the moment. Take advantage of that more deliberative mindset by using standard operating procedures to eliminate the chance for a bad (and rushed) decision. If the choice has already been made that circling approaches at night are never allowed and all runways must be longer than 3000 feet, the only job in flight is to execute the plan. That eliminates the temptation to cut corners, something the airlines have mastered over the last few decades, with stunning results.

Be open to updating your plan as conditions change. Just because you’ve made a good plan before the flight doesn’t mean you can’t react. How to avoid the inherent contradiction? First, never compromise on some essential rules (e.g., always have one hour of fuel on board). Next, maintain a balance: you should modify your plan when important facts change, not on a whim. When this skill is refined, it becomes a habit. You’re always asking questions, approaching information skeptically, and obsessing about your backup plan. As Maria Popova beautifully writes, “Allow yourself the uncomfortable luxury of changing your mind.” The alternative is tunnel vision.

Get another opinion. One way to force yourself to update your plan is to get an outside perspective, because we are all unavoidably self-centered. A flight instructor can be a great option, but so can almost anyone with a pilot certificate—find someone you trust and make them an informal weather briefer or an honest co-pilot. Just talking about a decision with someone else can often break us out of our bubble.

Be specific about what you control. When faced with difficult decisions, especially in flight, it’s critical to admit what you can and cannot do—as one of my flight instructors used to say, “ya gotta order off the menu.” If the crosswind component is 30 knots, you cannot change the wind, no matter how much you’d like to. Instead, focus on concrete actions you can take to maintain safety, like landing at another airport. Likewise, one of the first questions to answer in an emergency situation is not simply “what broke?” but also “what can I still do?”

Strong on vision, light on details. This mindset works for flying, business, parenting, and many other parts of life. It’s a reminder to be very clear about your ultimate goal (like arriving at your destination) and be less prescriptive about the exact method (flying direct, taking off at 4pm, going at 8,000 feet). That keeps your priorities front and center, while maintaining the flexibility to react to changing circumstances.

This final point hints at the key to better decisions. Forget trying to predict the future (a hopeless task); instead, improve your ability to react to inevitable changes. Set some absolute rules. Learn to seek out new information and analyze it critically. Get comfortable changing your mind and staying flexible. Be disciplined about tracking your progress.

Working on the craft of decision making can be immensely rewarding and lead to safer flying, but it certainly is not easy—and the job is never done.