Blog - Latest News
You are here: Home1 / Article Archive2 / I was there3 / The Boeing 787’s ten years of service—a pilot perspective

Almost 560 million passengers flown; 2.7 million revenue flights; over 1000 aircraft delivered, 90% of them flying through the pandemic with passengers or even cargo—more than any other widebody, even in dark times like these. The numbers for the fastest-selling heavy airliner in history are impressive. The Boeing 787 Dreamliner is a marvel that serves as a reference for anything that came after: quieter, smoother, more fuel efficient than any other jetliner designed before or after. From my perspective, having spent almost four years flying it (nearly half of its service time) and logging over 2300 flight hours in one of the pilot seats, I really feel proud of the level the 787 has brought me as a professional. And I am not talking about FL431 over China! 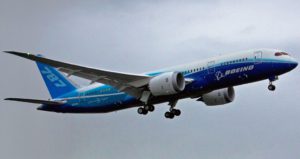 The 787 was a technological leap for Boeing. Has it paid off?

From a pilot’s perspective, the Dreamliner is the most comfortable Boeing ever designed. It is very spacious, with several environmental improvements that make it quiet enough to occasionally hear another plane passing by 3000 feet below on a dark night over the ocean. If we add to that the much cleaner air—that comes directly from outside, and not from engine bleed air—and 20% lower cabin altitude, it is a dream ride. It’s also a smooth one, since the gust suppression system helps to keep it steady.

Talking about turbulence, one of the few things that is not the Dreamliner’s forte is the radar: its algorithm doesn’t seem as smart as the newer 737’s one, for example. The bright side? The “seven eight” was designed to fly far and high, so with fewer sectors and above most of the bad weather—and other traffic—we don’t depend on the radar as much as previous models. And speaking of far…

Despite the relatively small size (in the range of 240 to 340 passengers), the Boeing 787 is a natural long-hauler: around half of the longest routes in the world are flown by 787s, noticeably the -9 version. The middle version of the family, it is just right on capacity and range. Even at its maximum payload, it can get very far. If you restrict it a bit, it shines—up to 20 hours of flight! Economically viable 14-hour plus routes, once impossible, are now done daily. Some 100 city-pairs have been created by the Dreamliner alone.

One of the features that makes it possible? The mysterious HLFC system. The small door at the base of the vertical fin of the -9 and -10 versions hides a well-kept industrial secret: by creating low pressure on the leading edge of the stabilizer, the air takes longer to detach from the surface of the airplane, reducing drag and improving fuel burn by around one percent at least—2000 pounds in a very long flight. The Hybrid Laminar Flow Control System has another magic trick: during takeoff and landing, the door opens in the opposite direction (thus the “hybrid”) to self-clean the system that would otherwise quickly get clogged by bugs and dust.

No less impressive is the choice by the manufacturer for the extensive use of electricity. Powered by four starter-generators, two on each engine, plus another couple in the APU, the airplane has electric brakes, pressurization, anti-ice systems and, as mentioned, engine start. The redundancies are such that even the lithium-ion batteries that were once an unwanted black spot on the 787’s early history are not designed to be used more than during transitory and very unlikely failures. All this saves a huge amount of pipes, hydraulic fluid, and overall complexity—giving the 787 impressively high rates of dispatch reliability. In hundreds of flights, I’ve seen it grounded by maintenance maybe once or twice.

Speaking of failures, because of its redundancies the common things you would see on the line are either rare or easy to deal with. And on the simulator sessions, the electronic checklist, the intuitive system designs, and the endless resources the airplane gives you make the Dreamliner a very friendly aircraft, even on a bad day. Lost an engine at V1? Rotate smoothly, follow the flying cue on the Head Up Display, and once airborne get your feet on the ground—the flight control system will handle it for you. 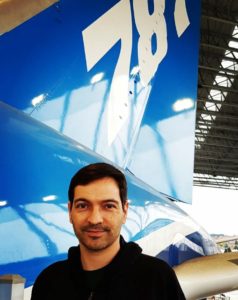 Fly-by-wire under the Boeing philosophy uses soft limits: it tells you up to where you should go, but you as a pilot have the final word. Nevertheless, there are several stall protections with the autopilot and the auto-throttle and even angle of attack and GPS altitude for a scenario with unreliable airspeed. The handling characteristics in degraded or direct modes are still decent, and in normal mode it is a technological gift: the way the aircraft helps you through your hand flying is nothing less than mind blowing.

For those who came from a traditional cable flight control system like the 737 has, flying the 787 feels weird at first, but once you understand and get used to it, the Dreamliner reveals itself as a smooth operator second to none. A trained eye seeing a 787 landing in gusty conditions from the outside can effortlessly spot the flight controls’ myriad of tricks to deliver the pilot what he or she wants from the machine. After all, Boeing wants you to fly it as if it were a conventionally controlled airplane, while a whole team of computers makes it actually much easier.

A nearly perfect wing makes the Dreamliner feel like a glider: picking up a much higher speed on descent will not make you go down faster, unless you use the very effective speed brakes. At cruise, its wingtips—bent nine feet up—create a fast and efficient profile. Climbing high, even when heavy, the economical cruise profile of Mach 0.85 puts it among the fastest airliners in the skies, burning around twice the fuel of a narrow body but carrying three times more weight. The composite material fuselage, the single most innovative characteristic of the 787, makes it much lighter, stronger, and nearly eternal when it comes to flying cycles—the real aging measure of an airplane. The “heavy plastic” came to stay, for many decades, and this was only the first.

Operating an aircraft of the historic importance of the Dreamliner (yes, we love the nickname) and with all the cutting-edge technology it brings is like time traveling; as if I were one of the few thousand aviators to have a glance of what the future of airliners will look like. The solutions on the 787 are so innovative that most haven’t even been tried yet by competitors—or even by Boeing. If you look at its nearest and later competitor, aside from some avionics stuff that are more a matter of philosophy than technological capacity, the whole project is more conservative than the 787s. And it is exceeded, once again, in performance: while being smaller, the Dreamliner carries the same payload and for longer distances, burning less than its European quasi-pair.

The costs of the project and profusion of issues with the worldwide production chain come at a high price tag. But with decades of service ahead and hundreds of airplanes still to be delivered, the Boeing 787 Dreamliner has reached its 10 year service anniversary with maturity without compromising its design youth.

Seaplane hijinks on the Connecticut River
Scroll to top