Blog - Latest News
You are here: Home1 / Article Archive2 / I was there3 / Seaplane hijinks on the Connecticut River

Always keeping an eye out for opportunities to enhance my aeronautical flight experience, on June 26, 1966, I wandered into Walt O’Connor’s Agawam-Springfield seaplane base. Talk about opening up new horizons! This river rat bush pilot got to enjoy his two favorite things: from “docks out” in the fall to “back in” springtime, his 65 and 85hp BC12D Taylorcrafts and his coveted Warner Radial-powered Fairchild 24, lay idle.

The other was his winter machine shop business. His instructor told me Walt would abide the tool salesmen while he persevered in the shop, but come spring, he kicked out the sales folks, closed up the shop, and it was hats and horns for the summer flying season. A real old timey entrepreneur, he flew hunters and fishermen all summer in the Fairchild up into Canada and Nova Scotia lakes.

One day I asked Walt how much he could carry in the Fairchild. He replied, “well, ya load up the hunters or fishermen, throw in their guns and gear and moose meat, fill the ‘toons with fish—if she won’t lift, you come back to the dock, and throw out some stuff. Ya do this until she lifts, that’s how much she’ll carry.” By the way, his instructor told me every spring when Walt set the docks, he managed to fall in the river: “I call it his spring bath.” 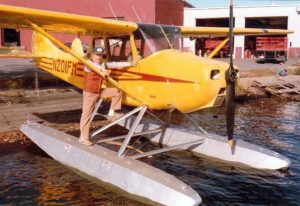 A seaplane on the river is a lot of fun, and occasionally good business.

Walt’s third income source involved flying a trio of Wall Street types down the river on Monday mornings, onto the Long Island Sound, and depositing them at the Wall Street Pier. Flying floats kept Walt’s schedule pretty secure—only a zero ceiling or visibility ever kept hm from his appointed rounds. Come Friday afternoon, he brought ‘em back. It was the 60s… now, Walt didn’t have an instrument rating, heck, he didn’t have a radio, either. We BDL controllers, having the old “skin paint” 1960s radar, would spy him skimming down river, headed for the Big Apple. His young flight instructor kept badgering him to get a radio, but Walt was not having any of that. I chatted with him too, about the need for communication going through the BDL/New York airspace. No sale.

Then came the day when we heard this transmission: “hey Bradley, this is Walt. I’m just below the dam, comin’ down river blah, blah, blah…” we couldn’t shut him up! He was finally thrilled with his new toy.

I said, “Walt, would you like to have a part time instructor?” He replied, “OK, if you’ll give some dual here, I’ll give you a seaplane rating.” Wow! More than this VW Beetle-driving newbie instructor could have asked for. Deal!

On that first meeting, he took me out in the T-Craft for 30 minutes, practicing taxiing, docking and takeoffs and landings (the water was smooth, wind calm). Then he hopped out and said “now do some landings.” My log shows I did four landings in 30 minutes. He did more dual with me later, then turned me over to his young instructor, Bill, where the training got somewhat weird at times… I would show up, and ask if my services were needed, but most days Walt would say, “nothin’ for you today, but go ahead and take one of the T-Crafts for an hour or so.” Heaven on earth! I was embarrassed that I couldn’t contribute to his bottom line. Ah well, he seemed happy with our agreement.

A few adventures did happen when a doctor sent his teenage daughter over to take lessons. One day, Walt said, “I got one for you. It’s the doc’s kid, barefoot.” (Did she think she might have to swim for it?) “Give her spins,” he said. OK, I enjoy spins, but it didn’t turn out that way today; apparently, without the aid of footwear, she could not push full rudder to initiate the spin–the T-Craft would quickly fall into the dreaded spiral, airspeed winding up fast. I would recover and coach her to press harder on the rudder pedal. After a couple more of same, I cancelled the lesson. At the dock, I cautioned her to “wear shoes from now on…”

On to my personal training. One day, Bill said, “today, we’ll have some fun. We’ll fly over to a park—there is a Polish picnic going on, and they’ll be launching big black balloons—we’ll have fun busting ‘em with the prop.” Huh? Well, he busted a few, and said, “wanna try some?” Can’t remember for sure, but I think I took a crack at a couple, deciding to quit while we were ahead…

The most bizarre instruction sometimes came from Bill. He set up this flight on a moonless, clear, calm evening. He attached battery powered, wing and tail nav lights and out we taxied into that pitch black river. He had briefed me on the landing technique: “point the nose on the green lights of the roller coaster over there, keep the lights on the bottom of the windshield; when you get too low above the trees on the river bank to see them, set up a 100 or so foot glide (we had practiced this in daylight); when you see white water on the floats, gently pull off the power and ease the wheel to full back stick.”

It worked! But landing in a black hole, danger lurked in the form of a big canoe filled with Scouts and their leader. Uh oh. Bill said taxi up near ‘em. He shouted at the scoutmaster, “this is a seaplane waterway; keep that canoe next to the shore!” 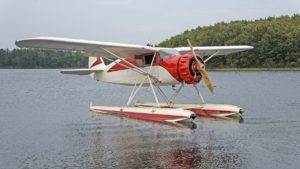 A Fairchild on floats is a unique airplane—one that mere mortals like the author were not allowed to fly.

Why the night checkout? Water flying in daylight was enough adventure for me, as I would never aviate at night (unless maybe I was on amphibs for land operations), let alone instruct in that whacky scheme. Ah, the 60s.

About Walt and the Fairchild

Nobody got to fly her, with one exception. One day, as I walked into the seaplane base, Walt came over and said, “I want you to meet Bob Cummings.” There was the famous actor in the left seat of the Fairchild, his manager beside him. Whenever Cummings was doing summer stock at the Goodspeed Opera House, Walt would let him fly the Fairchild!

I remember looking down from the BDL tower at Cummings’s twin Beech 18, with “Tunnel of Love” painted on the fuselage; it was the title of his show that summer.

The only other celebrity I ever met (besides the great Bob Hoover) was the wrestler Andre the Giant. He occupied two front seats in first class on my 707. A flight attendant told me he ate three steaks and cleaned out the liquor cabinet. I didn’t want to bother him, but I had to get his autograph for young son or I’d be disowned.

Robert Trumpolt
Bob took his first airplane ride in 1947, and the flying bug bit hard. He started as a CAP cadet, did a two-year stint as a line boy, then soloed a T-Craft at sixteen. In 1952, at age seventeen, he bought a 1936 Piper J-2 Taylor Cub, 40hp, single ignition, no brakes. His commercial flying career began in 1956, flying 493 hours in six months in a Tri-Pacer, over a nasty New England winter. Seven years as an ATC tower operator, charter pilot, and flight instructor led to a 27-year TWA career, starting as a Connie F/E, later F/O, and Captain on the Boeing 707, ending as a Lockheed L-1011 International Captain. His last landing was in another 1936 J-2 Taylor Cub (this one had brakes).

Close call with a blimp
Scroll to top