Blog - Latest News
You are here: Home1 / Article Archive2 / I was there3 / My personal Guinness Book of Records

That book’s list of the longest of this or whatever of that prompted me to scroll through an ancient logbook, remembering our three-day adventure to fly a distance of 95 miles… I know, weird, huh? Well, that little hop from Sterling, Massachusetts, to Martha’s Vineyard gave me and my wife quite a different flight experience.

Into the record book? 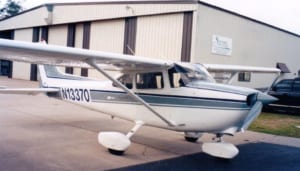 ‘Twas a bluebird day for aviating in our 1974 Cessna 172M Skyhawk, “The Gray Ghost.” I had arranged a meet-up with my wife’s longtime friends—we would be visiting them at their home on the Vineyard. A short hour and twenty-five minutes in smooth air brought us to the idyllic island. Piece of cake.

After lunch with the family, I took the mister and his two daughters for the grand tour around the island. It was now time to head back to home base. However, the usual goodbyes were stretching longer than planned, and my check on the weather showed a large mass of thunderstorms slowly grinding their way from the southwest toward our neck of the woods.

I whispered a couple of times in my wife’s ear that we needed to saddle up, time’s a wastin’. Finally, we launched for that “little flight” home—I filed an IFR flight plan just in case. As we neared Providence, Rhode Island (PVD), the controller advised that there was a line of strong storms over Worcester (ORH). He suggested that we land at PVD. I had already made that decision, looking southwest at a massive gray/black sky that was on the way as advertised. Tally for today’s flight time: 55 minutes.

I arranged for hangar space in the FBO’s cavernous hangar. Coming in behind me was a big King Air, carrying a load of business folks. I spoke with the pilot, who said, “I have never seen the radar totally red before; we were gong to PA, but this is it for me!”

We got a motel room directly adjacent to the airport, with a perfect view of our airplane through the open end of the Quonset-like hangar. Through the big window, I sat transfixed as a mighty gust of wind blew the rain horizontally, almost toppling a palm tree (yes, a palm tree) just outside our window. As visibility deteriorated rapidly, the lightning strikes began, hitting all around the field. To my surprise, a Boeing 737 and a couple of commuter types taxied out of the gloom. The 737 remained, but the two commuters took off in the storm! As the second one rotated, a strike hit the ground right on the airport, heavy rain and wind pounding down. Finally, as things settled down, the 737 departed.

Next morning, day two of our trek home, we ascended into a low ceiling on our way to Worcester Airport, as Sterling was a VFR airport, just a tantalizing thirteen miles away. However, Worcester Airport sits at an elevation of 1,009 feet, so with weather near ILS minimums, that would do it for today. As we approached the field, ATC reported that the previous day’s storm had wiped out the glide slope, so what now?

I requested my alternate, Hanscom Field, in Bedford, where the weather was good enough for an ILS. Just abeam of ORH, ATC came on with “the glide scope is back,” so I shot the ILS into Worcester (another 55-minute flight). Another try for home, no luck today. Once the bird was hangared, I decided to ring up my old boss from my line boy days at the Bolton Airport, back in the 1950s, who lived close to Worcester Airport. I asked for a ride to a motel. Pappy Malone was a colorful character, so I invited he and his wife to have dinner with us before we went to our motel. By this time, thick fog had enveloped the airdrome, and after dinner and a nice chat, Pappy volunteered to drive us home!

Day three, my wife drove me back to Worcester, and with a special VFR clearance (that darn elevation at ORH), it was an easy 15-minute scamper under a now decent ceiling, once I got off the hilltop, to finally get the 172 to her nest, capping off quite an interesting series of sorties.

Well, as the olde bard said, “all’s well that ends well.” That’s my story, and I’m stickin’ to it…

On the other end of the scale, one other odyssey was the 19-hour duty day flying a Boeing 707 freighter from Rome to JFK, holding for weather, finally giving up and retreating to Bradley Field, Connecticut, then back to JFK, more holding, and ending with a VOR approach to minimums. I recall getting food poisoning in Lisbon (must have been the raspberries that the flight engineer and I had; the captain didn’t); it caught up with the F/E in Rome, so by the time we broke out of the clag at JFK, I was so “out of it” that I saw we were still above the runway, with the threshold well behind us. I called it to the skipper’s attention, whereupon he replied, “it’s OK, this runway (14,500 feet long) has a displaced threshold.” Glad that one was over… no big deal to some, but that’s the long and short of it.

Robert Trumpolt
Bob took his first airplane ride in 1947, and the flying bug bit hard. He started as a CAP cadet, did a two-year stint as a line boy, then soloed a T-Craft at sixteen. In 1952, at age seventeen, he bought a 1936 Piper J-2 Taylor Cub, 40hp, single ignition, no brakes. His commercial flying career began in 1956, flying 493 hours in six months in a Tri-Pacer, over a nasty New England winter. Seven years as an ATC tower operator, charter pilot, and flight instructor led to a 27-year TWA career, starting as a Connie F/E, later F/O, and Captain on the Boeing 707, ending as a Lockheed L-1011 International Captain. His last landing was in another 1936 J-2 Taylor Cub (this one had brakes).

Desktop Flight Simulation and COVID: how it helps, how it hinders

My pal Joe, ornery to the very end
Scroll to top