Blog - Latest News
You are here: Home1 / Article Archive2 / I Can't Believe I Did That3 / Close call with a blimp

Like all pilots, I don’t like to talk about the stupid things I did in the early days of my flying career. I have filed this one (along with a few others) in the file that says “never again.” A big lesson was learned that night, and I made myself a promise to never again make low passes in an aircraft.

I was flying out of Homestead AFB, Florida, in 1961. I called home to check on some medical tests my other had back in Oak Ridge, Tennessee. Dad told me Mom was scheduled for thyroid surgery the following Friday afternoon. I went to the office of my commanding officer (CO), the 823th Photo Recon Flight Squadron Commander Lt. Col. Monty Monahan, a great pilot with whom I had flown with, and asked permission to take off that Friday, and take a T-34 to McGhee-Tyson AFB, in Knoxville. Lt. Col. Monty Monahan was the best CO I served under while in the United States Air Force. Any person under his command would walk through hot coals barefoot if he asked them to. He was that type of commander to his men. 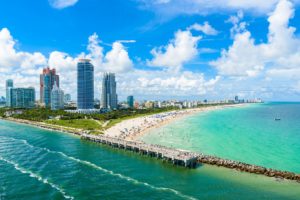 The perfect place for a low pass—right?

I had a date with my girlfriend, Lenore “Spook” (I gave her the nickname because she was always spooked at the slightest noise) on Saturday. Spook lived by the pier on South Beach in Miami, across from the famous Joe’s Stone Crab Restaurant. I told her I was going home to check on my mother and that I would be back Sunday night. I would make a low pass over the pier at about 8pm and would flash my two landing lights so she would know it was me. I would then drive up to see her about 10pm.

I signed out a T-34A, #5518A, stowed my B-4 bag in the back seat, secured it, and took off for Knoxville at about 9am. The flight to Knoxville was routine, just a few puffy cumulous clouds at 3000 feet but smooth above the haze layer with visibility of 50 miles or more. As I got to the Tennessee/Georgia state line, the weather started to deteriorate fast. At Cleveland, Tennessee, I encountered some heavy rain and light snow, as I started my approach for Knoxville.

I dropped down to 5000 feet, when Approach told me the weather at McGhee-Tyson was 500 overcast and 2 miles visibility. They asked me if I would accept a GCA approach as they needed some practice. Overseas, that was all we flew, and l accepted with a grin. GCA brought me right over the threshold of runway 22 (it is runway 23 now) at about 20 feet, and I landed.

My brother had also come home, from Blytheille AFB, Arkansas. He was flying the B-52G and had just made aircraft commander. He picked me up at the airport and we went straight to the hospital, so we could be there when Mom came out of recovery. She was surprised to see both her sons there; she had no idea we were coming.

All went well for Mom and on Sunday I called Spook to told her I would pass over the pier at 8pm. She said she and Johnny (her 8-year old little brother) would be on the pier with flashlights to return my flashes and let me know they saw me.

At Jacksonville, Florida, I cancelled my flight plan and dropped down about ¾ mile off shore and about 50 feet off the water, so I could make my pass on the pier and not be detected. Around West Palm Beach it was dark, and the lights reflecting off the ocean were beautiful. Weather was clear, with good visibility and a smooth ride.

I passed over Fort Lauderdale by Normandy Shores off Collins Blvd and could see the red light on top of the end of the South Beach pier. I rolled the aircraft, passing over the pier inverted, and flashed my landing lights. As I looked at the pier upside-down I could see two faint flashes of light from their flashlights. I was about 100 feet above the pier and started my roll back to level flight. After rolling back to level flight I looked back over my right shoulder, started my climb to 2000 feet to turn my IFF on and call Homestead AFB to make a jet two approach to the base.

Just as I turned my head around, right in front of my windshield was a big sign that said “COPPERTONE” in red letters. I shoved the control stick forward with a -3G drop that threw me against my shoulder harness. I leveled off at 500 feet and looked back: I could see the Coppertone sign on the other side of the Goodyear Blimp N4C, outlined against the lights of Miami Beach. He had his navigation lights out and all that was on was the slow flashing Coppertone sign lighting up in the dark night sky. I climbed on up to approach altitude and landed at Homestead AFB and figured my flying days were over.

I didn’t dare tell anybody about what happened and waited for Lt. Col. Monahan to call me into his office and kill me. A week passed and no one said anything, so the following weekend I went up to the blimp base on MacArthur Causeway and asked for the chief pilot of the blimp based there. I told him I was on the beach last Sunday night about 8pm when I saw an aircraft fly close to their blimp. He called a couple of his pilots in and asked them if they knew anything about it. The pilot who was flying it that night at 8pm said he didn’t see anything.

Thank God no one was hurt or saw what happened. I made a promise to myself: never pull a stupid low flying stunt like that again unless I was flying an air show and everyone knew where everyone was. Not even to do a buzz job after that… Bill Slover
Bill "Smokey" Slover took his first airplane ride in 1940 in a Waco aircraft that belonged to Jack Colson in Middlesboro, Kentucky. He started learning to fly aircraft with his father in 1947 out of Cook’s Aero Service, McGhee-Tyson Airport in Knoxville, and the Oak Ridge/Oliver Springs Airport. He served in the United States Air Force in the Strategic Air Command as a simulator instructor in the B-47s and flew for the United States Corps of Engineers and CIA, flying high altitude photogrammetric engineering in one-of-a-kind AT-11, T-28, and C-180 aircraft photographing the Mississippi River, lakes, flood areas and drug hot spots in the United States, Mexico and South America. Smokey has served as captain, chief pilot, and director of corporate flight operations, as well as simulator instructor in Class C and D simulators. He has logged over 18,000 hours.

Seaplane hijinks on the Connecticut River