What makes a fly-by-wire airplane fly-by-wire? The term is broadly used nowadays, but not often explained. Since we have many GA colleagues here, and the fly-by-wire is a concept more common to the military and airline world, it might be interesting to share some pilot perspective about its way of working and our way of flying it. Since I spent the last couple months transitioning between the only two Boeing fly-by-wire models, I thought it would worth sharing it with you. 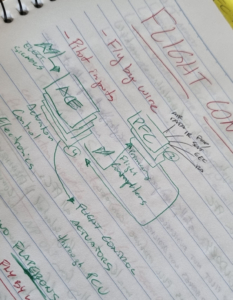 Fly-by-wire systems include lots of parts, but no physical cables.

Airbus introduced the FBW concept to civilian airliners with the A320 in the 1980s, and little by little, pretty much all other major manufacturers followed. FBW itself is nothing new—it was tested in late 1930s in Russia—and the Apollo Lunar Module and Concorde used it many decades ago. But was it was only in the 1990s, with its first clean sheet design in over a decade, that Boeing decided to adopt it in its commercial projects.

So, the first thing we need to understand are the modes of a FBW system: usually there is a normal, a degraded, and a direct mode. Airbus calls the degraded “alternate” and Boeing calls it “secondary.” In normal mode, the system works as it is designed to, with all enhancements and protections. In degraded, the system uses simplified data to operate, and many things are lost. In direct, well, you guessed: whatever pilot inputs it gets, it sends directly to the control surfaces, kind of like a conventional airplane (albeit without cables).

As you can see from the diagram at right, we have four ACEs and three PFCs. The ACEs (Actuator Control Electronics) are responsible for sending the signals to move the control surfaces; the PFCs (Primary Flight Computers) receive the inputs either from the ACEs during manual flight or straight from the autopilot system. The PFCs then process those inputs along with inertial, air data, radio altimeters, engine controls, etc., and produce enhanced signals that are sent to the ACEs (back to them if in manual flight, because they came from the ACEs in the first place, remember?) and then, from there, to the control surfaces.

The fact that we have four ACEs—none of which has authority alone to move a surface unless all other ACEs that share that control surface with it have failed—and three PFCs brings a lot of redundancy to the system. But still, in the 777 there are a couple spoilers (and the stabilizer) that can be controlled in a quite conventional way. The 787 has no such kind of old school backup—more on that later.

If something happens, like unreliable air data, the system falls into the secondary mode: the PFCs still process the data, but in a simplified way, with the old or remaining data. If the failure is on all PFCs (highly unlikely) or if the pilots disconnect them through a switch (more realistic, since some non-normal checklists would guide them to), the airplane reverts to the direct mode. Now whatever inputs the pilots make go directly to the ACEs, and from there to the control surfaces. So, fly-by-wire itself means that there are no cables or pulleys, hence no direct mechanical connection between the pilot controls and the control surfaces. But… why do it like that? What’s the point? And what else can we get from it?

From what we have covered so far, it looks a bit complex this FBW stuff. So why would the engineers go down that road instead of keeping it simple? Well, first of all weight. Nothing in an airplane hurts more than weight, and if you have to make profits with it, that’s even more true: in a typical 12-hour passenger flight, about 40% of the weight of a 777 will be the airplane itself, another 40% fuel, and only the remaining 20% is going to be the payload. Not pretty, at least not in pounds or kilograms. So, since electronics are lighter than mechanical controls, there you go.

The second reason is reliability. Once again we get down to costs, and the more reliable a system is, the cheaper it is to keep it working—and why not, the safer it is. Now, the third reason is more like a bonus than a reason itself. 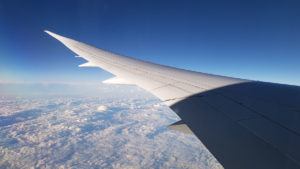 The pilot is in control of those ailerons and spoilers, but not completely.

Because you need to transform pilot inputs into digital data anyway, why not use computers to make them better? Why not including envelope protection? Why not provide a smoother and more efficient ride? The fact that—at least in normal mode—all the signals go through the PFCs allows for them to enhance the flying qualities of the airplane. A Northrop Grumman B-2 Spirit, for example, is inherently unstable and can only exist because of fly-by-wire. This is an extreme example; all airliners are inherently stable, including the 737MAX (which is not FBW, by the way). But that doesn’t mean their flying or pilots’ handling of them doesn’t have room for improvement.

So, every time the pilot commands something, the computers decide how to translate that to the control surfaces; instead of giving what you asked, the system gives you what you want. On my first flights in the 787, I felt like I was being “filtered;” three thousand hours later I can’t notice anymore. Something else it does is to compensate for things like changes in trim, power, or turbulence. These are all events that would require some input from you, as a pilot, but thanks to FBW are handled automatically. You’re maintaining a 25 degree bank? No trim needed. You are a bit above the glideslope? Here goes some autodrag!

But by far the coolest of fly-by-wire features are the protections: roll protection, yaw protection (in both 787 and 777 they are similar but not the same), overspeed, stall, and more. The list is long. Want to trim up until you stall it? Maybe so, sir, but not today. Feeling like Tex Johnson? Go ahead, but remove the bank angle protection first—it will make your life easier. Lost an engine? Let the robot kick the rudder for you. The downside is that all those nice things are mostly or entirely gone once the system automatically reverts to secondary mode or you revert it to direct mode. And I forgot to mention, the autopilot goes away too.

Flying characteristics of the 787 in direct µode are quite respectable. I would go far so far as to say that it feels like a 777 in normal mode—I don’t want to be too harsh, but… we are talking about almost 20 years of development. But the real puzzle is, how safe is it? What if you lose all hydraulics? Once again, is highly unlikely—history accounts for only one case (Sioux City, anyone?)—and in fly-by-wire airplanes that would be… ugly. (I recommend you check the QRH for this one; it is self-explanatory.)

But once again, except for maybe the 737, no recent big airplane can fly completely without hydraulics, therefore it doesn’t make sense to ask as much from a fly-by-wire aircraft, which are, otherwise, full of redundancies, usually three independent and fully capable systems.

The thing is, we are not going back, and backup cables—like the Concorde had and the 777 has—are being abandoned. They are a layer of protection so deep that it is only useful in extremely unlikely scenarios. Flying a fly-by-wire airplane is really good once you understand it, and it is not even the future anymore—it is a well stablished present. Embrace it, and it will prove vital.

Nose art, among other things

Ya gotta be able to see the air
Scroll to top