Blog - Latest News
You are here: Home1 / Article Archive2 / I was there3 / Nose art, among other things

I imagine every aviator has a special place in their heart for their favorite airplane and may even have a name for it. In many cases, that name is prominently displayed somewhere on the beloved airplane. I have always been fascinated by WWII aircraft decorated with what is commonly called “nose art.” Among my favorites is Bud Anderson’s P-51 named Old Crow, perhaps because it reminds me of myself. However, in my case The Ancient Aviator would be more fitting.

A lot of us have probably watched the Hollywood movie or seen PBS specials about the Memphis Belle, which has been restored and is now on display in the National Museum of the USAF in Dayton, Ohio. 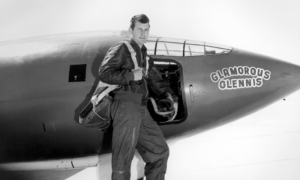 Every nose tells a story.

Chuck Yeager’s Bell X-1, in which he became the first to break the sound barrier, is displayed in the Steven F. Udvar-Hazy Center of the National Air and Space Museum in Chantilly, Virginia. Like the numerous P-51s he flew in WWII, the name on the X-1’s nose, Glamorous Glennis, is that of his wife.

None of the images I have seen of the P-47 flown by Gabby Gabreski, the leading American ace in the European theater during WWII, show any nose art. However, it prominently displays the symbols of his 31 confirmed victories scored against the Luftwaffe. Now that’s art!

As a Forward Air Controller (FAC) with the 23rd Tactical Air Support Squadron (TASS) in Southeast Asia, I played a role in something other than nose art on an airplane called The Proud American.

When I was with the 23rd TASS, our squadron flew the North American Rockwell OV-10 Bronco using the “Nail” callsign; each of us had a number associated with that moniker. I was Nail 49, my roommate was Nail 47, and our commander was Nail 01. Fighter aircraft contacted us using our callsign so we could direct where they were to drop their bombs, ground commanders would sometimes plead for “any Nail!” when facing an enemy force, and, of course, controlling agencies used them when working with us. Hence, we were known as “the Nails.”

FACs in Southeast Asia had a well-deserved reputation for flying a tough mission: we were only about 3% of the Air Force effort there, but we represented 12% of Air Force personnel killed in action in that war. The Nails also had a well-deserved reputation for playing hard because we needed to blow off some steam—at least that was our thinking! One of those steam-venting occurrences involving the Nails happened on Thanksgiving Day of 1972.

Both the Officer’s Club and the NCO Club at our base in Thailand, Nakhon Phanom Royal Thai Air Force Base (NKP, or “Naked Phanny”), made money hand over fist because they were the only places one could reliably get a square meal 24/7/365. Those profits weren’t bad because they were plowed back into the Morale, Welfare, & Recreation (MWR) Fund that benefited everyone on the base. However, it was decided that enough money had been made leading up to Thanksgiving Day that all the food (and drinks!) would be on the house that evening.

Following dinner (and drinks!), there was a band playing some good old rock ’n roll music and the Nails decided we needed front-row seats for the show. So we moved our squadron table (and drinks!) from the dining room and situated ourselves directly in front of the band, much to the disgust of the rest of the audience. This resulted in a barrage of insults and ice (from their free drinks!) being hurled at us. We instinctively returned fire and pretty soon a near-brawl had erupted and the band promptly shut down their show. The club manager realized the error of his ways and closed the club for the evening.

Not wanting to appear like bad sports, the Nails invited everyone to move the party to our squadron bar, fittingly called the “Nail Hole.” The majority of people put their differences aside and the party reconvened at our place.

Mistakes were made, as they say.

As the evening wore on, an unknown party-goer staggered out of the Nail Hole to go to the nearest men’s room. While staggering along, he either tripped or else he wanted to demonstrate how, back in the day, he had tackled the opposing quarterback to win his high school’s homecoming football game. This resulted in him knocking over an unsuspecting banana tree. That inspired other wannabe heroes who similarly tackled or threw a cross-body block on other offending banana trees surrounding the Nail Hole. After all of the banana trees in the immediate area were flattened, the mayhem spread to other squadron bars in the area, all within staggering distance. The final insult that befell all of these banana trees was when someone brought out a machete and cut them off at ground level.

Early the next morning, the Nails were all awakened by our squadron’s Non-Commissioned Officer in Charge (NCOIC) going to each room, banging on our doors, and yelling for the occupants to, “Get down to the squadron NOW!!!”

As the Nails arrived at the squadron, our NCOIC ushered us, one-by-one, into the office of the squadron’s Operation Officer where we reported in with a sharp salute (“Lieutenant Hill, reporting as ordered, SIR!) and then remained at attention. Nobody was put “at ease” as the Ops Officer, in no uncertain terms, asked, “What, exactly do you know about what the @&$>*<#%! happened last night?” As far as I know, nobody ’fessed up or else they pleaded the 5th. As for me, I stated I had gone to bed early, a true statement; but I failed to mention it was based on Greenwich Mean Time, which is only seven time zones west of Thailand.

The Wing Commander (AKA the “Wing King”) wanted heads to roll and was talking about Summary Court Martials or, as rumor had it, Summary Executions! Fortunately, our squadron commander was able to talk him down from the ceiling with the promise we would all chip in to buy replacement banana trees and then plant them ourselves.

So, we passed the hat and asked our Thai friends where we could buy some replacement shrubbery—Home Depot and Lowe’s were not an option. The Thais thought we were crazy because banana trees grew everywhere on and around NKP, and they grew quickly. But the almighty dollar convinced them they could lend us a hand, which they did. For the next several days, some Nails were heard whistling the theme song from Green Acres as we planted LOTS of banana trees around the base.

Fortunately, the Great Banana Tree Incident quietly died out and things returned to normal, until…

The Wing King noticed the A-1 parked on a hard stand outside of the Wing HQ building was weathered from the tropical sun and rain beating down on it. This airplane, with nose art declaring it The Proud American, had flown many combat missions and had suffered heavy battle damage, which made it no longer airworthy. But, it had been repaired to the point it could be placed on static display. The A-1 was well known for the weapons load it could carry and The Proud American sure looked good sitting there, replete with a ton of inert weapons hanging from the many hard points on its wings.

The Wing King directed the paint shop to take it to the paint barn and make it look good. The paint shop did just that and The Proud American was soon back on display. However, somebody failed to hang the weapons back on the wings.

This situation continued for several days, much to the consternation of the Nails. Being good citizens, we took matters into our own hands. One dark night, a few banana trees were quietly chopped down and, the next morning, they were found hanging from each of the hard points on The Proud American. Needless to say, the Nails were all proud of the civic duty we had performed for the base. However, the Wing King certainly wasn’t happy with our work—someone said he very nearly had a heart attack.

Fortunately, once our squadron commander had once again unscrewed the Wing King from the ceiling, he was able to convince him that it was a harmless joke and a much-needed respite from the stresses of war. That afternoon, the banana trees were gone and The Proud American was soon sporting newly painted inert ordnance.

Fly-by-wire for beginners
Scroll to top