Blog - Latest News
You are here: Home1 / Article Archive2 / I was there3 / Dumb games with very fast airplanes

In February of 1966, I was lucky enough to be selected to fly the Republic F-105 Thunderchief after graduating from USAF pilot training at Williams AFB, Phoenix, Arizona. I had hoped to get selected for a fighter assignment and this was on the top of my wish list.

I reported to Nellis AFB, Las Vegas, Nevada, in April 1966, after trekking in the Sierras for a few weeks at the Air Force Survival School, and was introduced to the world of fighter pilots, fighter tactics, weapons delivery, and gunnery training. Nellis was and still is the home of Air Force Fighter Weapons School and is one of the prime fighter pilot training facilities in the world.

My class of six, five lieutenants and one captain, were all fresh pilot training graduates with 250 hours of jet time in the Cessna T-37 and Northrup T-38 Talon. We thought we were the world’s greatest fighter pilots and we worked hard to out-perform each other and show our instructors how great we were.

We had a lot to learn!

The “Thud,” as she was affectionately known, was a very complex and challenging beast. One of the largest single engine warbirds ever built, she weighed over 53,000 pounds at takeoff. Powered by the Pratt & Whitney J75 engine that produced 26,000 lbs of thrust in afterburner, it also consumed fuel at incredible rates. We calculated that we could burn all our fuel in about ten minutes if left in afterburner, so we only used it when absolutely necessary.

Designed as both a nuclear and conventional weapons delivery aircraft, she was capable of Mach 2 and could carry almost any type of missile, rocket, or bomb in the Air Force inventory. She could deliver her weapons in any weather, day or night, at any altitude and all with a single pilot in control.

She had air-to-air capabilities with the built-in 20mm cannon “Gatling gun” and Sidewinder infrared, heat-seeking missiles. 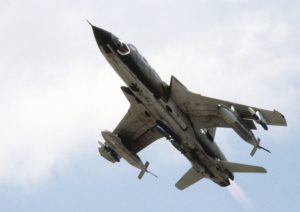 The “Thud” was a high performance jet fighter, but could not fly long on afterburner.

It was the only fighter that had an internal bomb bay and could carry a heavier load of bombs than the World War II era B-17—over 13,000 pounds of high explosives.

Her landing speed was a minimum of 190 knots over the fence and often higher depending on the configuration. She was unforgiving to you if you did not follow the procedures and checklists, however she was a joy to fly and once you got comfortable flying her, she was very stable, reliable, and loved to fly fast! (I don’t know why pilots refer to their airplanes as females but that might be the subject of another essay.)

We had most of Nevada for our playground during the summer of 1966 and if you have ever flown over it or driven across it, you will notice these big white flat areas all around Nevada and the desert West which are dried up former lakes.

After our initial check out and many hours of training, we were getting comfortable flying low level missions at high speeds, usually about 400-500 knots pretty close to the deck.

One day one of my classmates said he discovered a cattle watering stock tank out in the middle of a particular dry lake. He said it was cool buzzing the cows and watching them go bonkers after sneaking up on them very low at close to Mach 1, then lighting the big afterburner (which made a deafening explosion when lit) and pulling straight up to watch the mayhem.

The cockpit had little rear view mirrors mounted on the canopy so you could see behind you to check for attacking planes—not for watching cows and such! Several of us tried this little game and it was kinda dumb fun but it didn’t take much to entertain us at the time. There were no people or buildings within a few miles of the place, or so we thought, and it was all inside our restricted range area so it was technically legal for us to do what we wanted, including going supersonic at any altitude.

The kicker came several days later, when one of the crew chiefs who serviced our airplanes reported to the commander that he found a high-powered rifle slug in the vertical fin on one of our airplanes.

The commander called us in and we fessed up that we had been harassing cows out in the desert. He let us know that he was extremely unhappy with our behavior. We quit playing this game.

I know the cows were relieved.

Can you imagine the rancher, trying to keep his cows alive, who was shooting at a plane that was going about the same speed or faster than the bullet he was firing? I never met the person but he must have been an excellent marksman and thank goodness he hit the tail and not the cockpit. That would have been a very difficult accident to figure out for the investigation team. The loss of a pilot and a multi-million dollar airplane would have been catastrophic.

We got his message!

Several months later, during the spring of 1967, we were flying combat in Vietnam and we got shot at every day, with a lot more accurate and bigger, radar-guided guns. Even though we were expecting it we still lost a lot of airplanes and pilots to ground fire.

The tables had turned and now we were the targets. This game became deadly serious.

From Venezuela to Alaska and back