Blog - Latest News
You are here: Home1 / Article Archive2 / I was there3 / A pilot fresh from the sim gets a real world test 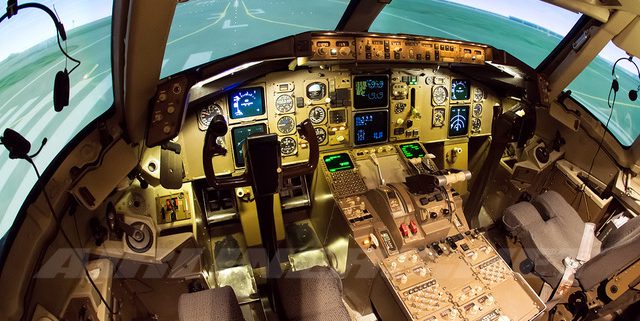 Airlines rely on simulators for training because they can provide many more procedures, both normal and emergency, without exposing crews and airplanes to risky situations. It is precisely the infrequent but the risky situations that pilots need to practice the most.

I remember the old days when the airline used to give an instructor and several students an empty DC-8, DC-9, or DC-10 and tell them to go out and get some training doing various takeoffs, landings, and air work for several hours. We would do engine failures on takeoff, various engine-out approaches, and many other types of emergencies with the actual airplane. It was great training, but the expense and risks were not sustainable. I just cannot imagine the cost today of flying around for hours doing touch-and-gos in an empty Boeing 767 or Airbus A330.

So, yes, today training work is done in simulators. 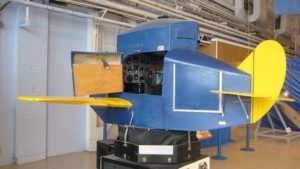 Sims have come a long way since the Link Trainer.

Simulators have come a long way from the early Link Trainer models in which some of us got training when we started out. I flew one of those old-vacuum powered plywood boxes and they were really a handful. First, there was absolutely no feel to the thing. It was like being locked in a doghouse that had no door or windows, and then be instructed to make it track around a course and do some procedure turns to an ADF or VOR approach (you remember those, don’t you?).

You had some instruments that were supposed to indicate a bank to the left or right, but the vacuum pumps that made them move usually leaked or never had enough power and some of the time you would get into a bank and the instrument would stay flat and disinterested. Other times you flew the whole procedure in a left or right bank. Messing with the aileron control just made the situation worse. I recall trying to make the thing turn by leaning to the left or to the right. Sorta like riding your bike with training wheels on it.

After several hours in it you were pronounced proficient for six months.

Today you would not recognize a difference between an actual airline cockpit and a simulator cockpit (except for the trash bag of used coffee cups and stale sandwiches leftover by the previous crew). From time to time an FAA Air Carrier Inspector would come along to certify that the new captains, co-pilots, and flight engineers were now ready to carry passengers. This would be their final check ride before going “on the line.”

Heaven knows how many passengers would run off the airplane if they knew that their pilot today had never flown the actual airplane they were on. You might be flying with a crew member who either had a thousand landings in the airplane or NONE, ZERO, ZILCH! You have no way of knowing. But fear not, the FAA and the airlines require that the new pilot be accompanied by a designated Line Check pilot, an experienced “old head,” for their early flights on the line.

On one perfect, sunny, clear day with light winds, it was my fortune to be the designated Line Check pilot. I had a new co-pilot who had just been certified.

In the simulator he passed his FAA check ride, an oral exam and a written test. Today was his very first line flight in an actual airplane. Our international trip was scheduled for an ocean crossing from Atlanta to Brussels and he had never flown our Boeing 767ER before. We were at maximum gross takeoff weight of almost 400,000 pounds, being full of passengers, cargo, and fuel. We meticulously went through all the preflight checks and briefed all the contingencies of a heavy weight takeoff. I usually made the first takeoff with a new co-pilot, but I wanted him to get the experience of an actual heavy weight takeoff, so I gave this takeoff to him. As the FARs required, we carried a third pilot on this flight because it was longer than eight hours. He sat in the jump seat and he turned out to be very useful.

As we all know, V1 is the computed go/no-go speed. Prior to V1 you should be able to stop on the runway if you have a problem, but once past V1 you must fly and deal with the problem in the air. Vr is the speed at which you rotate and V2 is your minimum safe speed you can fly on one engine and maintain a climb.

In our case all was normal on the takeoff roll and as we accelerated, I called V1 and Vr. As soon as I called Vr there was a staccato of very loud bangs and I saw flashes out the left side. It sounded like someone shooting a gun off next to your left ear. This was followed by one of the loudest and most attention-getting noises you have ever heard in the cockpit of a jet airliner. It was not a bell, a horn or a beep-beep or anything that you were trained to hear. 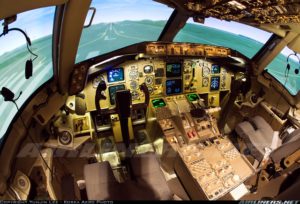 Full-motion simulators can prepare pilots for a lot of scenarios—but not how to deal with other crew and passengers.

The noise came from the flight attendants slamming their fists on the cockpit door and screaming “DID YOU HEAR THAT NOISE, CAPTAIN? WE ARE HEARING VERY LOUD BANGING NOISES!!!”

We were busy by then analyzing the problem and reacting to the malfunction.

I did not want any distraction, so I told the jump-seat pilot to let them know we heard the noise and that we were under control. This allowed my co-pilot and me to concentrate on flying the airplane without being interrupted. This is not part of any checklist but it’s the kind of unscripted thing that most of us never experience in simulator training.

My first-timer co-pilot recognized the engine problem immediately and kept flying the airplane just as he had been trained to do. I determined that he had the situation under control and I proceeded to execute the appropriate checklist for the engine failure. The left engine had not completely failed but was unable to produce full takeoff power without producing massive compressor stalls or backfires. After retarding power, it subsided so I elected to keep it running.

Tower had seen the flame coming from the engine and was also calling us. We cleaned up gear and flaps, ran the appropriate checklists, and called tower to let them know we were aware of the problem. We declared an emergency and advised we were making a 180-degree turn to a downwind. The co-pilot did an outstanding job because he had been doing these exact scenarios for the past month in the sim. The timing for him was perfect and he was barely surprised. Probably the only one of us who thought this was routine.

By the way, always say you have an emergency— if you even think you do. When you say that word it triggers a lot of attention and help from other folks in the air and on the ground and you will never be sorry you used the e-word. It will give you priority for anything you want and will save you a lot of headaches.

On downwind, I briefed the very nervous cabin crew and made an announcement to the passengers. I decided to take over from the co-pilot for the upcoming heavy weight landing as we elected not to dump fuel and spend more time in the air than was necessary. We asked for the longest runway, landed, and the only problem we had were some very hot wheel brakes because of our abnormally high landing speed and weight. Dealing with a cabin full of passengers and crew added to the stress but we all stuck with the age-old commandment of “aviate, navigate, communicate.”

Airliners are incredibly reliable machines and the pilots who fly them have come to trust that the airplanes will give them years and years of service with very few problems at all. There are probably many airline pilots out there who have flown their entire careers without a major malfunction, but they are always trained for the worst-case scenario because those always happen when you never expect it.

Many years ago, famous author and veteran pilot Ernest K. Gann described airline flying as, “hours and hours of boredom punctuated by moments of stark terror.”

That is still true today.

How does an engine “know” when to scare a pilot?