Blog - Latest News
You are here: Home1 / Article Archive2 / I was there3 / You wanna land where?! 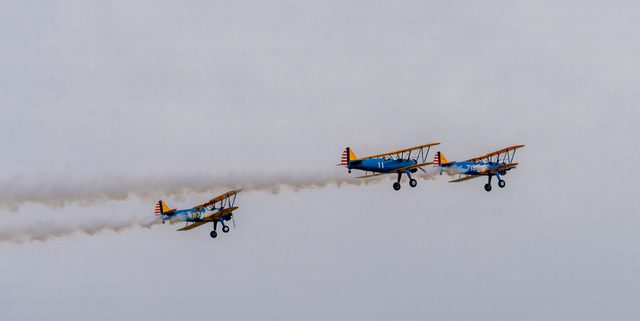 You would think this was the first thing you would be asked by Atlanta Approach Control when you check in on their frequency and tell them you are Scorpion Flight, a formation of three 80-year-old Stearman biplanes, and your destination is Atlanta’s Hartsfield-Jackson International, one of the world’s busiest airports. 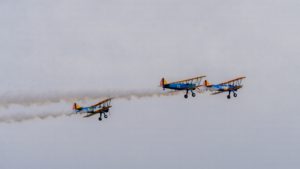 It is a Boeing…

However, Atlanta Approach Control feigned ignorance and proceeded to vector us all around the area. I told them we were three Boeings but I don’t think they were impressed. I think they were hoping we would just quit and go away, like some pesky insects at a picnic, but they finally gave up and passed us over to the ATL Tower controllers, who were more cooperative.

Of course, they had been informed that we were coming. In fact, this is an annual event at Delta’s Technical Operations Center, or TOC. Most of us call it the “Jet Base” and this year was the 10th anniversary for the Delta Veterans Celebration.

Eleven years ago, Mark Norris, a USMC veteran and current Delta maintenance technician, had the visionary idea of honoring all the thousands of current and former employees at Delta who are military veterans. They work in every department of Delta Air Lines and are a big part of Delta’s support and care for the troops all over the world. Delta management gave their approval and this has become an event held the week before Veteran’s Day every year. This 24-hour celebration runs concurrent with all the employees working three shifts at the TOC, so everyone gets to participate. There are many activities going on simultaneous to the aircraft on static display. Many of the veterans bring in pictures and memorabilia to share with their friends and families, who are all invited. 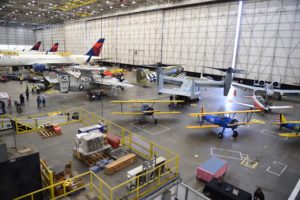 Quite a variety in an airline hangar.

There were about 40 military aircraft invited in this year for display inside the huge, mile long, main hangar, which can hold anything, including Boeing 747s. The size of this building has to be seen to appreciate the enormity of it. I don’t know what the total dimensions are but you can’t grasp it until you’ve been in there. When you see a C-17 tucked into a corner and it looks small, you get an idea of how big this building is. We could easily get a few hundred Stearmans in there and maybe throw in their hangar’s too.

This was my third year there and my Stearman was featured on the anniversary logo and patch!
We planned to arrive in a formation of three and make a military-style approach but that was only a fantasy. I was Scorpion One, in ship #897, and Vic was #2, in his polished and perfect Stearman #719. Scorpion #3 was flown by JP, a current Delta pilot in Stearman #11. There were about 25 aircraft on display this year as the weather prevented many from making an appearance.

The Delta maintenance personnel on the ground handled us like experts and we were parked in the front row and very well cared for and pampered while on display. 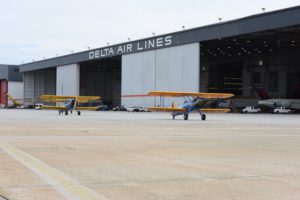 A lot of history in one picture.

Atlanta Approach had a challenging job trying to get most of these slow-movers sequenced in with the constant flow of jet traffic, and you can imagine their difficulties of trying to get three 90-mph Stearmans in between Boeing 747s, Airbus A380s and other huge jets. Our formation fly-by plans were soon forgotten after the difficulties of getting us into their traffic pattern.

Even though I have landed at Atlanta Hartsfield hundreds of times before, during my airline career, it is always a challenge once you are on the ground. Nobody knows all the taxiways and sub-taxiways, controlled by many different ground controllers and ramp controls, each with a different frequency—so you need to be sure of your location and not be afraid to ask for help.

Another problem is that sitting in a Stearman on the ground you cannot see in front of you, so finding the taxiway and runway signs is challenging. We do a lot of zigging and zagging! There are five very active runways in use at Hartsfield so you have to be absolutely sure you are cleared to cross any of them. Good communications are critical and it helps to have a taxiway diagram in front of you.

While I was taxiing in, ground control had a huge Delta Airbus A330 hold short of my taxiway while we taxied by in front of him. I assured the Delta jumbo I would hold my power down to keep him from getting blasted from my prop and he thanked me profusely… a little courtesy is always appreciated! My 14-year-old granddaughter was in my front cockpit and she got a big laugh out of that.

Friday afternoon departures went on schedule with cool, clear weather, and we finally got to do a three-ship takeoff and blow smoke down the runway to say thanks and goodbye to all our friends at the Delta TOC.

Who’s pilot in command? A faulty assumption leads to an accident