Stalls are not a subject I ever expected to be writing about. They have been part of my flying repertoire since I first learned to fly in the 1970s. So why write this article?

After a 25-year hiatus from flying, I returned to making stalls and steep turns part of my regular proficiency regimen. However, the media and pilot conversations kept bringing up the concern that pilots were afraid of stalls and avoided them. Personally I believe this is the wrong approach and that stalls should be embraced in order to learn about the flight handling characteristics of their plane. A couple of experiences really brought the subject of stalls into focus.

An opportunity to fly a Cirrus Vision Jet with All In Aviation in Las Vegas brought stalls to the forefront. The FAM hop in the SF-50 left seat was a delight, with Paul Sallach in the right seat. Takeoff and a short trip out of the Class B was followed by steep turns to get a feel for the plane. To the question of what I wanted to do next there was no hesitation on my part: slow flight and stalls in order to explore the low speed flight envelope. He laughed at my request.

Wondering why he laughed, I sought a little clarification. Paul responded that of the many FAM hops he had flown with prospective customers in the jet, I might have been the only one to ask to do slow flight and stalls! Most pilots were more focused on exploring the colorful flight management system displays. This just blew me away.

In preparing for the 10-hour Airmanship and Aerobatic Course with Patty Wagstaff Aerobatic School a few years ago, I read several articles that stated that pilots rarely exceed a pretty low angle of bank and pitch up attitude after getting their license. Those statement were just too hard to believe. But follow-up conversations with Patty and other experienced professional aviators confirmed this fact.

It is not my intent to profess to be an expert in stalls; there are aviators far more qualified that I am. Many excellent books have been published that address stalls from Wolfgang Langewiesche’s Stick and Rudder to Rich Stowell’s Stall/Spin Awareness. In fact, Stowell’s book prominently displays text on the back cover stating “Don’t fear the stall/spin, Master It!” He has recently introduced a new booklet entitled “Learn to Turn, A Stick and Rudder Approach to Reducing Loss of Control,” where he cautions that “Stalls don’t happen to the pilot. They happen because of the pilot.” Another good resource is the FAA Advisory Circular AC 61-67C,on Stall and Spin Awareness Training. 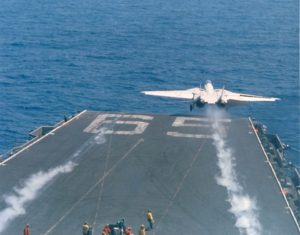 My first job in aerospace gave me a unique familiarity with the low speed range for airplanes. As a flight test engineer with the US Navy at Patuxent River, Maryland, we conducted minimum end airspeed tests off the aircraft carrier catapults to generate the Aircraft Launching Bulletins (ACLB). Tests with instrumented aircraft were first conducted on shore to determine the minimum airspeeds for the aircraft in many different configurations.

Then we would take those aircraft to the boat (i.e. the carrier) to perform catapult launches at gradually decreasing speeds to determine the minimum end airspeed. Once the minimum controllable speeds were identified, the ACLBs were developed so that they ensured a 15-knot minimum end airspeed margin for when the fleet would launch aircraft. So the speed envelope just above stalls and the stalls are familiar.

Stalled flight occurs when the critical angle of attack is exceeded. But the plane is not going to fall out of the sky, it just isn’t able to maintain altitude. On a coefficient of lift versus angle of attack curve, stalls occur past the peak on this curve, or the point where the increase in the angle of attack results in a decrease in lift. This is the technical stuff but what about stalls in your plane?

I have to admit that during my training for my private pilot certificate many years ago, there was apprehension to demonstrate stalls. However, somewhere along my flying career I decided to learn to love stalls rather than fear them. Once I got over that obstacle, stalls became my friend, not my enemy.

If you haven’t focused much on stalls, slow flight and steep turns, grab an instructor at your next flight review, or just go fly with an instructor to renew those slow flight and stall capabilities that you learned when first getting your license. The benefit of flying with an instructor is that they will be able to identify those actions you are doing correctly and those that may need improvement. Plus it will help alleviate any fear that you may have in doing these maneuvers on your own.

Before flying with an instructor, it is important to agree what type of stalls, slow flight, and steep turns you want to demonstrate during the flight. Are power-on, power-off, and accelerated stalls enough? Or do you also want to investigate cross-controlled, elevator trim, and secondary stalls? Make the most of your flight by setting goals in order to help you become a more experienced pilot after the flight.

Once you have mastered slow flight and stalls again, make them part of your future flight regimen. Your level of proficiency will improve and you will feel even better when you next “slip the surly bonds of earth!” Pat O'Brien
Mr. O’Brien received his BS in Aeronautical and Astronautical Engineering from Ohio State University and an MS from the University of Southern California. Prior to forming his own association management company in 1992, Mr. O’Brien was sales manager for GE Superabrasives, a leading supplier of diamond abrasive products. He began his career as a project manager in the Carrier Suitability Branch at the Naval Air Test Center in Patuxent River, Maryland directing the test and evaluation of catapult launch and arrested landing of Navy jet aircraft. He then took a flying position for Foster Air Data as sales manager for RNAV systems.

When the magic dies: flying with and without HUDs
Scroll to top