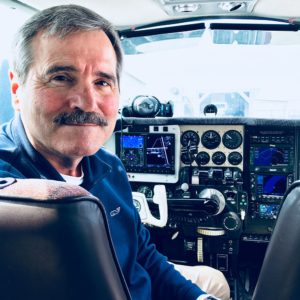 Mac McClellan logged thousands of hours in his Beech Baron.

Mac McClellan is a frequent contributor to Air Facts, but as Editor-in-Chief at Flying magazine for 20 years he flew just about every new airplane delivered since 1976. In this podcast episode, Mac shares his favorite ones and some that he wished he’d never flown.

As a keen observer of general aviation trends, Mac also explains why pilots are flying fewer cross countries, why personal flying inevitably means tradeoffs between safety and efficiency, and what the future holds for urban air mobility/eVTOL proposals.

In the “ready to copy” segment, Mac shares why he thinks personal minimums are a bad idea, the best places to fly in Michigan, and what sailing and flying have in common.

Listen on your favorite apps:

Friday Photo: pyramids of Giza from a 787
Scroll to top