Blog - Latest News
You are here: Home1 / Article Archive2 / I was there3 / Harmony and distractions

Music occupies space as poetry. The notes merge into a symphony, calibrating the brain with that ethereal sense of wonder. Bach’s music by some is considered the emotional calibrator. Each melodic note rides the wave on the preceding note; much like the start of an IO-550 engine, you can hear the guttural sound on ignition. After the fuel pump has loaded up the distributor block and the mixture of air and fuel is introduced into the cylinder, the magnetos induce the electrical spark from the spark plugs as a gentle cascading flame spreads across the piston head, combusting the air/fuel mixture and pressing the pistons in their cylinders into a perpetual linear motion of up and down.

You can hear this if you concentrate and slow your brain down—keep the door and window open when starting the engine. Keep the headset on your lap for a moment and listen. Just like the members of a symphony or at a Broadway play, the musicians calibrate their wind and string instruments before the maestro raises his arms. And suddenly there is harmony. All the cylinders fire in harmony if there is no early morning sickness of stuck valves. The CHTs on the display come alive like the musical score communicating the information visually. All is well with the machine, pilot, and the world. 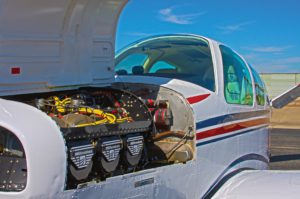 Do you hear the symphony?

I put my headsets on when the symphony is well on its way and then listen through the noise cancelling waves for any errant cellist in the mix. Taxiing to the approach end of the runway is much the same: no distractions, just concentration on the task at hand, safely negotiating the taxiway to the runway and using the checklist.

Taking off is magic, every time. Ask any pilot and within a fraction of a percentage you will hear these words, “Its magic!” As the weight is lifted off the gear and borne entirely by the wings, we are airborne. The sound of the engine changes as it harmonizes with the ocean of air.

After an hour and a half of flying, I was returning to my home airport the other evening. It was a dusky evening with the haze clamped down firmly beneath by the overhead gray clouds. It was that time of the day where the forces of night are hammering at the door to let it in, and that little bit of twilight won’t give up.

Three miles from the airport, I was already at traffic pattern altitude, slowing down from my standard 20 inches of manifold pressure (MP) to 18 inches. The winds were calm on surface based on the AWOS but at 1000 feet they were 5 knots from the west. I was planning the 45-degree entry for a downwind pattern to runway 24, when I heard the call that a Cherokee was on a practice ILS approach to runway 06. He announced that he was three miles out. Midstream in my thought process, I changed my plans to accommodate the pilot and land on runway 06 as well, to avoid any conflict.

I was doing 110 knots, slowing to 105 knots as I flew crosswind-midfield overhead the runway. Turning onto left downwind, I reduced power to 15 inches of MP to slow down. Suddenly that blessed-neural-harmony of thought had an errant cellist in the midst. The Cherokee pilot announced he was one mile from the runway threshold; I looked for the aircraft below and to my left and could not see the aircraft. Nope, nothing there! I strained at 2-3 miles beyond the runway threshold and nothing still.

I heard the seven clicks, and the runway lights came on at full bright. I strained to look for the Cherokee to decide when to make the base turn. And lo and behold, his localizer must have been pegged to the right because he blew right past me, 500 feet below and closer to my flight path. The Garmin lady blurted “Traffic! Traffic!” as the yellow ball danced just below me on the MFD.

I turned base as the pilot announced a missed approach and the yellow ball disappeared on the MFD. I noted that my airspeed was still 95 knots and put the approach flaps in and simultaneously reduced the MP further. The dissonant cacophony of the gear-warning alarm disturbed the harmony! One and a half miles from the threshold. I looked for the three green—and there weren’t any! My hand grabbed the gear handle and pushed it down and four seconds later the three green lights lit up. The base leg gave me ample time to stabilize for the final approach at 700 feet.

The “500 feet” warning came on a few seconds later and I deployed full flaps. The aircraft slowed down to my desired approach speed of 80 knots, and I reconfirmed the GUMPS with the “three green” visually once again. I looked for the Cherokee pilot and saw him well left of the runway executing a missed approach, turning southbound right over the midfield at 200-300 feet above my altitude. Fortunately, there weren’t any others around to partake in this spaghetti-like confluence of distractions and maneuvers. 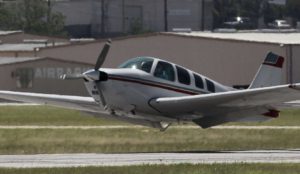 Not the result any pilot wants.

What went wrong with my symphonic harmony? It is obvious there was a minor distraction that prevented me from reviewing and executing my checklist. In retrospect, I realize that if the harmony of thought is broken at any point during a flight, one must force oneself into the basics. Perhaps, I should have extended downwind and pulled out the checklist and reconfigured for the approach (a wiser and more careful methodology), but not turned back to an upwind for another pattern since the Cherokee pilot was cutting his missed approach quicker and at a lower altitude (although I did not have a clue then). He would have been a conflict!

These are questions worth pondering in the aftermath exercise. An old saying, “there are those pilots who have had a gear up landing and those who will,” scares the daylights out of me!

What went wrong (Excuses n’ all):

D- Detect that the action is necessary: checklist review
E- Estimate the significance of the action: gear up landing
C- Choose a desirable outcome: landing safely
I- Identify actions needed to achieve the chosen option: power/speed/gear/flaps
D- Do the necessary action to achieve change: extend gear/flaps
E- Evaluate the effects of the action: power and desired speed

What saved the day:

The musical interlude exists to enjoy for another day, for breaking the surly bonds and witnessing the spectacle of flight—but now with renewed concepts and understanding.

Confessions of a seaplane charter pilot