Blog - Latest News
You are here: Home1 / Article Archive2 / I was there3 / Confessions of a seaplane charter pilot

Following my retirement from dentistry, I became very bored very quickly and realized the necessity of having something to occupy my spare time. I immediately turned to the field of flight.

I had already owned and leased out aircraft, including a new Piper PA-16 that I traveled to Florida to purchase new for $10,750 (in 1963) to replace my worn out, leased Piper Tri-Pacer. (The salesman suggested that I sell the valuable radios and “throw in” the airplane). I then flew the new airplane back to Boeing Field without a radio; yes, they still painted the name of the airport on the roof of the hangar to aid navigation. Later, I bought and leased to my glider club a Piper Super Cub for towing gliders. But the maintenance, fuel, and insurance ($4,500/year on a $20,000 aircraft) made the business model impractical; I returned to my first love, seaplanes. 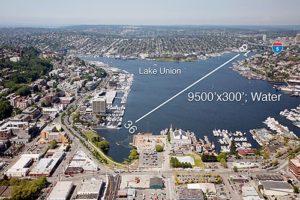 Lake Union is one of the busiest seaplane bases in the world.

My mentor, Lana Kurtzer, had already died and his estate had sold the land and the company to his former competitor. But one of his long-time employees had established a small company across Lake Union; I decided to introduce myself.

The timing was perfect; the seaplane charter business is seasonal and (most of) the small companies fly seven days a week for three months in the hope of earning enough to carry them over the winter months. This was the beginning of the season and the boss needed a pilot. I checked out in one of his two Cessna 206s on floats (N8397Q) and immediately began flying, at first occasionally and then nearly every day. The Cessna 206 with a Continental IO-520 engine had right-side double doors aft but lacked a front seat right-side door (no exit from the right front during docking) and was mounted on Deep V 3400 floats that were valuable when landing in rough weather.

Aircraft maintenance was the responsibility of the boss (an A&P) and always a consideration. One of my first charters was ferrying a passenger to Shawnigan Lake on Vancouver Island to attend a rowing crew race. Before departing, the boss muttered something about the alternator on N8397Q that I did not clearly hear and we headed out of Lake Union, crossed the straits, and soon found Shawnigan Lake near Victoria. It was surrounded by crowds of people; I landed and taxied up and down the shoreline searching in vain for a docking area to unload my passenger and finally shut down the engine in the hope someone would run out to us and take my passenger. Nobody volunteered; I decided to restart and taxi clear of the lake for the coming race. The battery was dead!

The crew race began, and I was stranded in the middle of the course. People were shouting and waving at me from the shore to clear the course and finally one kind boater recognized my problem and towed me off the course to shore. The emergency paddle fit into a sleeve on the inside of the left float; I used it to paddle into a float where my passenger quickly jumped ashore and disappeared. The race finished and I sat there deciding where I could find another battery and thinking unkind thoughts about my boss and what he had muttered about the alternator. I suddenly remembered that sometimes if you leave a dead battery sit a few minutes it sometimes generates a small revival charge. I tied a slipknot to the cleat on the float and ran the end into the cockpit, hit the starter and it kicked over once and started! But my problems were not over…

I took off, climbed out to 2,000 ft., leveled off for cruise and noticed that it was cruising 10 mph slow. I checked the power settings, flaps, and water rudders but suddenly remembered… the paddle! Looking out the window I could see that it was firmly plastered vertically to the leading edge of the float struts by the airflow, blade down and with the handle just out of reach. I knew that I could not fly across the city with this situation—it would surely depart at a most inopportune time—and tried everything to dislodge it: slow flight, stalls, skids, slips. All were unsuccessful, and finally I let down and touched down on the step and dislodged it.

I returned to Lake Union with a more realistic understanding of maintenance problems in small (and large?) aircraft companies that I found valuable in future years on several occasions. 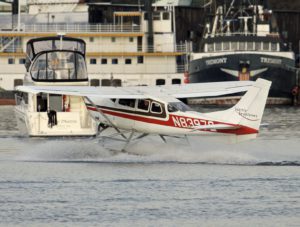 A seaplane can get the pilot into unique forms of trouble.

My seaplane charters continued nearly every day in the summers and there were always challenging problems that kept it interesting.

For instance, Tuesday was sailboat race day on Lake Union, and it was sometimes challenging to find an area large enough to land without violating safety rules. I returned one late Tuesday to find dozens of race competitors covering almost the entire lake. I noted one potential area on the east side of the lake that would could qualify by stretching the rules slightly, and entered a downwind left-hand pattern over Westlake Avenue with final approach to touchdown into the strong breeze just offshore from the houseboats lining the lake. I touched down easily and settled down off the step to begin my 180-degree turn around on the water to taxi back to the dock at the southeast corner of the lake.

Floatplanes weathercock into the wind and are difficult to turn away from the wind in a strong breeze. The torque from the propeller rotation will turn them naturally to the left and the greater the RPM, the greater the left turn force. The water rudders help when properly rigged to allow them to deploy full length into the water; 8379Q had received a recent 100-hour inspection and the rudders were not properly rigged.

After touchdown, I applied (a lot of) power, stood on the left rudder with the yoke back, began the 180-degree left turn, and slowly came around 90 degrees to find myself with my madly thrashing propeller looking dead ahead at the Seattle police harbor patrol boat. This was not a good way to make friends! I completed my turn and taxied back to the dock with the police boat following. I climbed out, tied up and, expecting the worst, met the officer coming down the dock.

He had a quizzical look on his face as I calmly greeted him, and unapologetically explained the difficulty turning the seaplane away from the strong wind. I offered to taxi him out on the lake to demonstrate the problem.

He just smiled and said, “I thought you were just being obnoxious.” Merle Hanley
Merle Hanley is 93-years old and lives in a retirement community in Seattle. He served two years in the US Navy and after discharge entered the University of Washington, graduating from Dental School in 1955. During his 34 years practicing dentistry, he also earned a Commercial Pilot license and after retiring flew many charter flights from Seattle and Renton to the numerous islands along the coast of Washington State and Canada. During the past 20 years he volunteered for a local air and space museum. Future plans are on hold awaiting the outcome of the pandemic.

Get-home-itis: be on the lookout

Harmony and distractions
Scroll to top