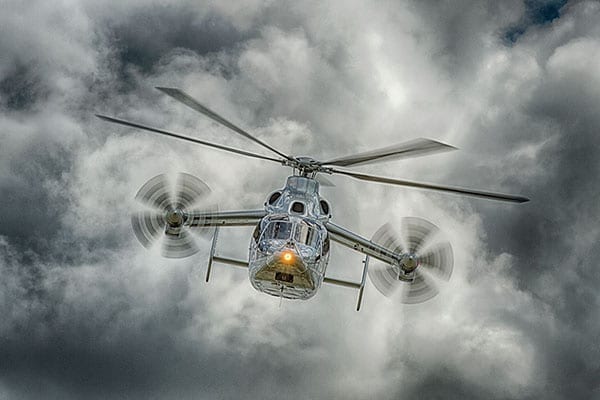 The memory: As chief contract photographer for Airbus in Grand Prairie for some eight years, I was often privileged to see and photograph for the company a significant number of prototype and test bed aircraft. On more than a few occasions, like this one, the aircraft was a one-off design to explore the viability of a new technology and how it might be adapted to forthcoming production types. The X3 was unusual from many different perspectives, not the least of which being the addition of a pair of stub wings with tractor propellers at their tips. The propellers, though appearing to have their own powerplants, were actually driven by the engines that drove the main rotor (a pair of Rolls-Royce Turbomeca RTM322 series turboshafts rated at 2,270 shp each). Power to the propellers was delivered through a system of drive shafts and transmissions.

I photographed the X3 numerous times during its US tour in 2012. It was flown to Alliance Airport from France in a partially disassembled state and then flown on its own power to Airbus’s facility at the Grand Prairie Airport. A multi-day series of demo flights were conducted for interested VIPs. Following that, the aircraft departed for a multi-state tour to accommodate further demo requests.

Prior to being shipped to the US for the demos, the X3 had completed its first flight on September 6, 2010, in Marignane, France. On May 12, 2011, the X3  reached 267 mph—one of the fastest speeds ever achieved by a “conventional” rotorcraft. Following completion of its 199th and final flight, the X3 was donated, during June of 2014, to the world-famous Musée de l’Air et de l’Espace at Le Bourget Airport northeast of Paris. It remains on display there as these words are written.

And yes, Airbus is working on several future rotorcraft designs that will take advantage of the X3’s unique technology!

Is that airframe icing or snow?
Scroll to top