Blog - Latest News
You are here: Home1 / Article Archive2 / I was there3 / Always bring a flashlight 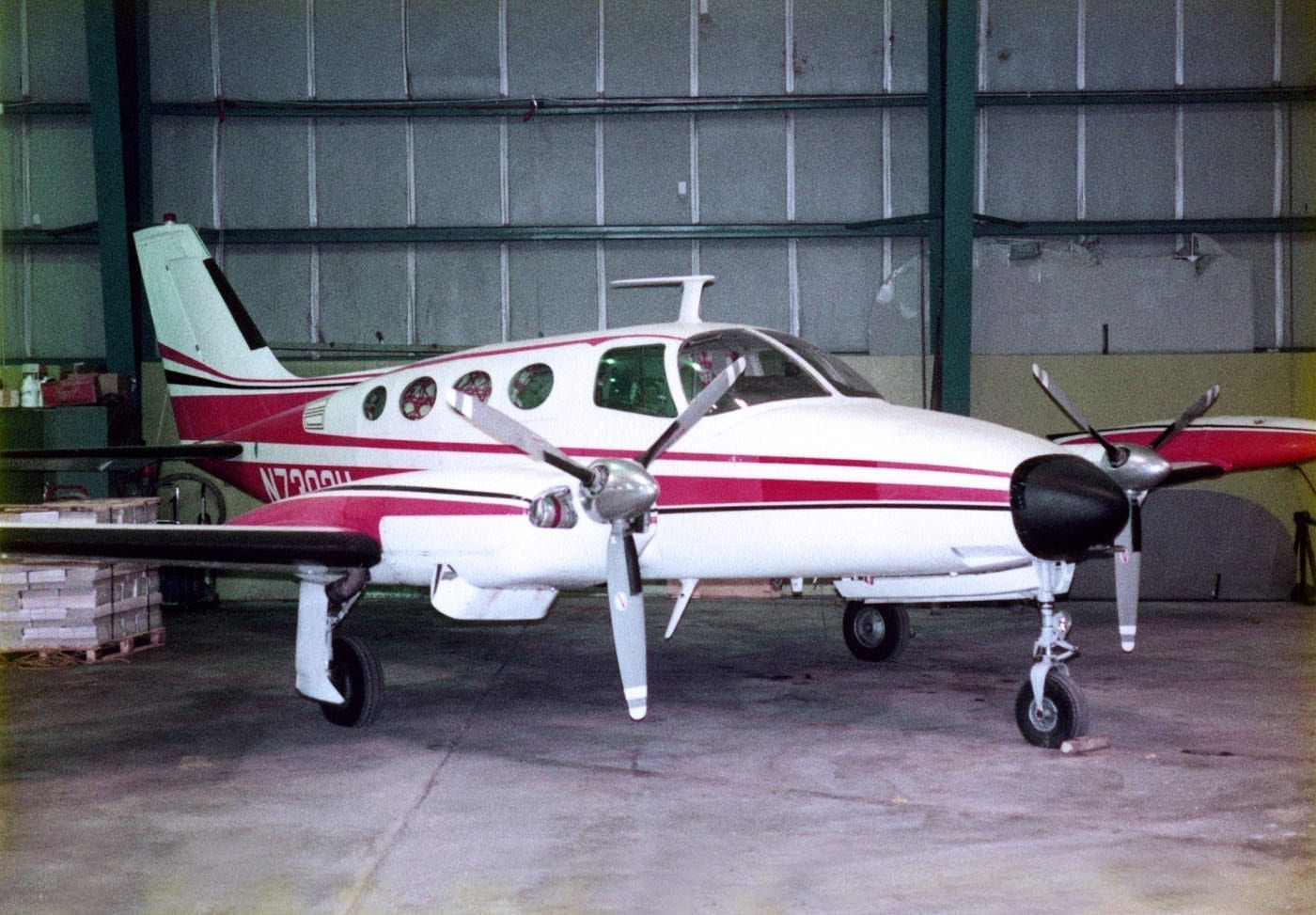 November is the time of year in the Midwest that can bring beautiful crisp late fall days, or it can bring fog, snow, ice, and a freezing rain chilling to the soul. In late November of 1981 I had a flight that encountered almost all of those that mother nature could provide.

I had four passengers to pick up in Springfield, Illinois, with a departure time of 8pm from there. This meant that I could leave pretty much whenever I wanted from my home airport in Carbondale, Illinois.

My chariot for this trip was a Cessna 411. This model was the first cabin class twin from Cessna, the predecessor to the reliable Cessna 421. Although not pressurized, it was a comfortable ride. Powered by two Continental GTSIO-520-Cs rated at 340 horsepower, proper and often maintenance was a must. Cruise was relatively quiet while turning 1900 RPMs. Single engine procedures included closing the inoperative engine cowl flaps, or, depending on weight, a descent would begin shortly thereafter. Not a short field performer.

The Cessna 411 was not known as a stellar performer.

Our Cessna 411 was serial number 2—there were 252 built, we had the second. The avionics were a hodgepodge of mix and match. The communication radios were split… as in one box for transmitting, and one box for receiving. To operate, you had to switch frequencies on both, otherwise you could be transmitting on one radio and listening to a different frequency on the receiver. The transponder was mounted on the bottom of the panel, about where a copilot’s knee would be. The old transponder was still in the panel, just deactivated. Autopilot, dead. The ADF had a crank for frequency selection. There was a Narco all-in-one for VOR/LOC navigation on each side. The cockpit itself was very roomy, with plenty of space between seats, and lots of room to the outside bulkhead.

I did not understand why, but the old guys referred to the 411 as the “Widowmaker.” After this trip, I understood why.

The departure weather was crummy. The sun had set hours before, leaving behind a 100-foot overcast with 1/2-mile visibility in fog. At a balmy 42 degrees, we were on the warm side of the approaching cold front. The forecast showed improvement with frontal passage, which was to occur about the same time as my departure from Springfield. There were multiple cloud layers en route, with icing above 6000 feet and the occasional snow shower. Springfield was 26 degrees, ceilings around 1700 feet, 5 miles visibility with snow showers.

Shortly after takeoff I was on top of the first cloud layer. I headed for Springfield at 4000 feet, fat, dumb, and happy. It did not take long before I was back into the clouds, with no stars visible above and no ground below. No ice, smooth, all good. After about twenty minutes, I had decent ground contact, with snow showers every now and then. Another twenty-five minutes or so, and I would be in position for the pickup. Back into the clouds I went.

I heard increased wind speed. The controls were becoming loaded with aerodynamic forces. I grabbed the all-metal, two D-cell battery flashlight from between my legs, turned it on, and stuck it in my mouth. The attitude indicator showed a death spiral to the left. The angle of bank was 30 degrees to the left and increasing. My descent rate was approaching 1500 feet per minute.

Fly the airplane, I thought. I levelled my wings, popped out of the clouds, saw an interstate below me, and what appeared to be VFR conditions. I continued the descent, got beneath the clouds, turned north—right over I-55—and headed for Springfield.

The airplane was now under control. I had time to figure out what worked and what didn’t work. The transponder light was blinking, so I squawked 7700, hoping it was transmitting properly. I checked the navigation lights and saw nothing. I could see the reflection of the red rotating beacon on the wings, so I knew I wasn’t totally invisible in the dark of night.

Having flown this route many times, I knew that if I followed interstate 55 northbound, I would end up in Springfield, where they had CFR equipment if I was going to need it upon landing. I dialed in Springfield approach and called them a couple of times. I had suspected the transmitter to be dead and I was right. Number two radio dead, too.

From my pre-departure briefing, I knew they were probably using runway 31, so I entered a wide left downwind. As a precaution, I switched both the transmitter and receiver to the local tower frequency.

“Aircraft on left downwind for runway 31, if you are 02 Uniform, turn off your rotating beacon,” the controller said. Talk about a sigh of relief.

“Understand you are 02 Uniform; you are cleared to land on runway 31”

I thought this nightmare was almost over. I tried to extend flaps and got nothing. Then I selected down on the landing gear selector. I heard all the correct noises, but I had no green lights. Not even one. In my head I felt that the gear was down and locked. However, I could not be sure.

I did a push to test on all three gear indicator lights as I was turning final, but to no avail—still no positive indication of the landing gear position. I elected to do a low pass to the active runway, in anticipation that the controller would understand my predicament. He already knew who I was, so I was hopeful.

“02 Uniform, I see your low approach, if you have a possible gear problem please turn off your rotating beacon.”

I turned it off, and back on again.

“02 Uniform I see you have a possible landing gear problem. If you would like the crash fire rescue trucks turn off your rotating beacon, please”

I turned off the beacon and thought, I’ve done it now. I looked down and saw their flashing lights coming out of the fire station as I turned to a left downwind. This gave me time to execute the manual gear extension procedure. Seems to me it was 66 cranks of the manual gear extension handle, or four cranks after the green lights were illuminated. Still no green landing gear lights, but I had done everything I could to ensure that I had wheels.

My jaw was getting sore holding the metal flashlight, so I propped it up in my lap so I could sort of see the flight instruments. There was some reflectivity off the 1800 foot overcast from the city lights, which helped.

“02 Uniform you are cleared to land on runway 31, the trucks are rolling.”

The controller was my new best friend. This time he did not have to instruct me to turn off the rotating beacon for acknowledgement.

The no flap landing was uneventful, although without landing lights. The fire trucks followed me to the local operator. After I parked, I went to the crew on both trucks and thanked them for their service. I went inside and called the tower controller and thanked him as well. That was when he informed me that Center had lost not only me on radar that night, but they had also lost a single engine aircraft in southeastern Iowa, presumably due to reported severe airframe icing. It had been a tough night for air traffic controllers too.

Everyone spent the night in Springfield. Another aircraft came up to pick up the passengers the next morning. The front had passed, the sun was shining, so I flew the airplane back to Carbondale, gear down, no radio. With the flashlight still between my legs.

The culprit was a blown bar fuse on the main electrical bus. A pilot cannot re-set or reach this fuse. The buses were not very well organized, which explained why some things worked and others did not and not in a logical way.

After that evening, I referred to that airplane as the Widowmaker, just like the old guys.