Blog - Latest News
You are here: Home1 / Article Archive2 / I was there3 / The joy of a flying dad 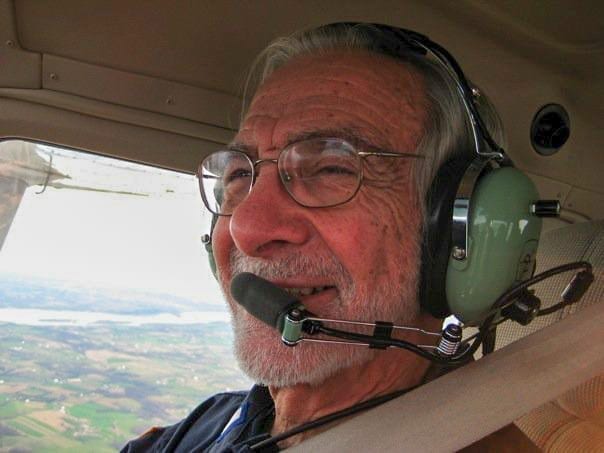 My dad recently flew west and I have been thinking about the gift of flying that he gave me from a young age. Flying has been a great joy in my life. I am very thankful that my dad was the original aviator in our family, because without his interest in flying I’m not sure I would have ever had mine. I’ve had much fun and learned a few lessons along the way.

Washington-Virginia Airport was very close to DCA, in an era before heavy security restrictions.

Dad became a pilot in the early 1950s. He was in his late 20s when he learned to fly at a small airport located inside what we now call the Class Delta airspace—approximately four nautical miles southwest of Reagan National Airport (KDCA). That GA airport, known as Washington-Virginia (or Crossroads), was gone by 1970, the victim of land development. Though I don’t remember flying there with my dad, his stories of his early experiences operating so close to a big city airport like National while also being careful to clear the drive-in theater movie screen on short final to one of the runways seemed amazing to a little kid. My dad was an early superhero.

I am not surprised that my dad became enamored with flying. It was very different from anything he experienced growing up in a quiet Midwest town. From the get-go, his parents weren’t that keen about the idea when he announced that he was learning to fly. Their disapproval seemed to spur him on in his role as the family contrarian. It’s reported that my grandfather never flew in an airplane while he was living.

My earliest memories have something to do with an airplane. My dad took me flying regularly (I did not get sick like my sister), he taught me the basics (though he was never a CFI), and he even started and kept a logbook just for me. It’s amongst my most treasured possessions. My first logged flight as the sole manipulator of the flight controls was in April of 1966. I was seven years old but I suspect that I had likely had my hand on the yoke long before that. According to that first entry, we operated a local flight that started and ended at DCA in a Cessna 182 E model. Those were the days long before 9/11 and the lockdown of the DC airspace!

My logbook reminds me of my first time in the left seat (of a 172) when I was 11 years old. My dad was friends with an FAA inspector who gave me my first official flight instruction as a favor. It was heady stuff.

I remember Dad taking me to a big airshow in 1972. It was held at Dulles Airport, featured one of the military demonstration teams (Thunderbirds I think), and was where I first saw Bob Hoover fly his P-51D Mustang. Not a lot of memories remain except the joy of hanging with my dad and eating two airshow hot dogs with a large Coke.

Sometimes we would go places and Dad would rent an airplane to do a short sight-seeing flight. Typically, he would need to do a checkout first and then be able to take me. This was how I got some of my first grass field takeoffs and landings, and saw coastlines and beaches from the air.

The original pilot in the family.

Pages of my logbook bring back many lessons learned and the beginnings of my learning, as I developed my own aeronautical decision making (ADM).

Legal vs. Proficient. I remember a regular pilgrimage we flew every year from the DC area to Hartford, Connecticut, to visit my aunt, uncle, and cousins. We delayed a flight to allow morning haze to burn off even though we could have taken off in very low IFR conditions and probably would have been just fine. Dad wasn’t comfortable with the risk and taught me the difference between legal and proficient. He didn’t want the possibility of an emergency that forced a return to the departure point, which would require a level of performance that he wasn’t routinely used to delivering as a private pilot. I have routinely made decisions along these lines based on watching him always make these kinds of choices.

Fuel Management. In the pre-GPS days, none of the airplanes had DME so groundspeed was determined the old fashioned way, using the clock, a sectional, a nav log and an E6B. I tracked our groundspeed on one of our cross-country flights, which ended up quite a bit lower than predicted due to headwinds. The trip dragged on and Dad said we were going to stop to get gas even though we were only 30NM from our destination. We could have made it but we hit Dad’s predetermined time limit for our fuel load and we stopped. In my own flying this has happened a couple times and I learned the right thing to do first from Dad.

Tools. Dad taught me the importance of having what you needed in your flight bag. He always had the right tools for the job: current charts, multiple flashlights (red and white), an E6B, headset (back in the days when handheld mics were still widely used), and a handheld transceiver to prepare for lost comms on an IFR flight. I still have that radio. He never skimped on the tools to fly well.

Later in life Dad flew as my co-pilot. We were in Civil Air Patrol together. He marveled at the Garmin G1000, the iPad, and fuel flow computers that I started to fly in the early 2000s. It was staggering to him to essentially be flying the same airframes but with all the added sophistication of the computer-based electronics. One of my favorite and last pictures was him flying in a CAP 182 with all the screens. I am thankful for a Dad who introduced me to flying and taught me by his example how do it right.