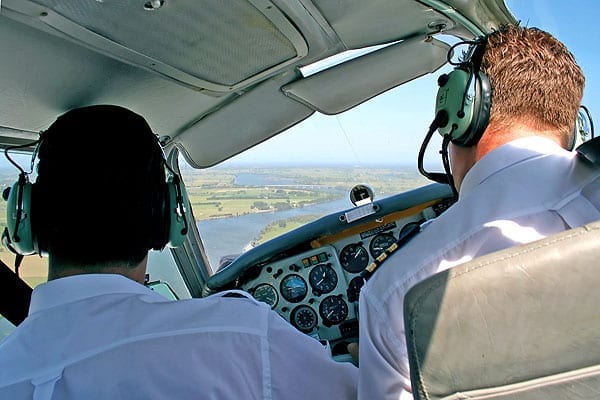 I became a flight instructor late in life (my mid-50s) and it has been fascinating after many years of “left seat” flying to take this next step in my flying career.

Shameless plug and article spoiler: If you’ve ever thought about becoming an instructor after years of flying, you’ll be fascinated by what you experience and learn in the process of training toward the CFI and even more once you earn the certificate and begin your CFI flying. I strongly encourage you to get started. You will love it!

Because of my work situation I am not a full time instructor. Much like my flying has always been, it’s “in addition” to the other roles I have in life. Nonetheless, I’ve had some great lessons as a very part time flight instructor so far, which I will share below.

Learn from Good and Bad

We can all learn from the good and the bad elements of the flights we’re a part of. Sometimes I think watching something not go as planned for a student or applicant is more instructional than them doing it correctly—for them and for me. A maneuver “gone wrong” is a vivid reminder of what wrong looks like and a great opportunity to explain what happened and learn from it.

Clearly there are certain situations where you just can’t sit back and let the scenario play out, like a really botched landing. However, in the majority of cases allowance can be made for the lesson to be fully learned that will cause no damage except possibly to the ego of the one doing the maneuver.

The one in the right seat is learning too.

The most prepared pilots I fly with always do the best. Preparation takes on different forms based on the mission at hand, but preparation is the key for almost anything successful in aviation or medicine or…

Preparation by me, the CFI, is as important as preparation by the student. If you’re reading this and you show up for a lesson having barely thought about the last one or you are headed to an evaluation flight and you have not looked over the material you’ll be expected to be familiar with or you haven’t flown in a while yet you’re about to be evaluated, you’re not doing your best and will likely not be flying your best. You will do much better with preparation and will be happier with the outcome.

Most of us have heard it said, “Good habits are for a lifetime.” I think this applies to flying as well. A thorough briefing including weather, the condition of airspaces to be transited, and a good preflight of the airplane with checklist close by are habits that all the good pilots I have flown with share. A thoroughness and thoughtfulness of approach to taking off and landing particularly stands out to me. They fly their airplanes to profile and have honed their skills because they aren’t relearning the basics every time they fly. They have personal minimums too and won’t intentionally fly above their capability.

I love this: Thinking is what most people resort to after all else fails. —Jonathan Lockwood Huie

In particular I’m referring to the thinking of pilots about their skills. They review their flights after for clues on areas to improve and purposefully set out to get better. They celebrate their accomplishments, a squeaker landing or winning against a stiff crosswind. They seek input from others and regularly fly with people who can help them improve their skills. One of my pals insists on an instrument proficiency check every six months so someone he respects is looking at his instrument flying twice a year.

And the ones who think are not looking to check the box for legal purposes but insist on the standard of proficiency as their minimum standard. They ask themselves if they are up for the challenge of that day’s flight since different weather and other conditions can differ between two points very significantly on any given day. And thinking pilots use learning and proficiency resources wisely. Websites like Air Facts, FAASafety.gov, AOPA Foundation, and others have so much available.

I have been struck by the generous spirit of the best pilots I have flown with. They consider it important to mentor new members of the aviation community. This could be as simple as a Young Eagles flight or walking over to the airport fence to talk with a young person staring through to the airplanes on the other side and inviting them inside to look at their airplane and learn a bit more about aviation.

In clubs this might mean helping the new member get situated by offering to take them for a flight or go along on their first flight in a club airplane. It might be giving up your reservation to allow a fellow club member to fly after they were forced to cancel for weather the day before. This could mean leaving an airplane you share with others in better shape than you found it. This could mean medical relief or animal rescue or wounded warrior flights. They look for ways to give to others their love and passion for aviation.

I’m sure you could make your own list of the characteristics you’ve learned from flying with others. I hope you’ll share what you know in the comments section for the betterment of all.

Low Visibility Takeoffs: How Low Is Too Low?