Blog - Latest News
You are here: Home1 / Article Archive2 / I was there3 / My life as a new corporate pilot 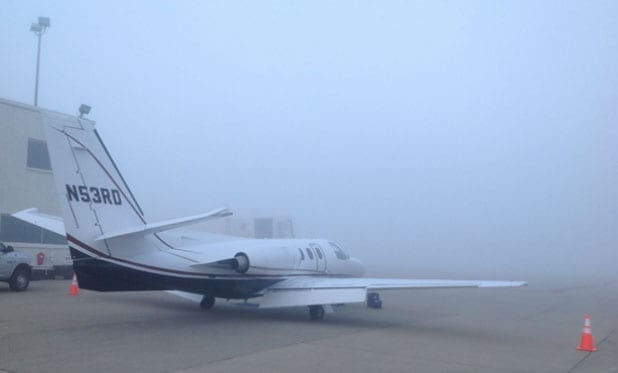 When I was fresh out of college, I stumbled into one of the most fun flying jobs I’ve ever had. I had been volunteering for a local airshow and another volunteer introduced me to his friend who managed aircraft for some local companies and high-net-worth individuals. The operation wasn’t an airline that required an ATP so my low flight time, while not exactly a selling point, didn’t cause any legal issues. The problem would be getting me insured in the airplanes. I don’t know what kind of insurance premium was paid and the strings that had to be pulled to list me on an insurance policy for a corporate jet but I am forever grateful that it happened. For someone with less than 1,000 hours and a mere 20 hours of multi, this was an amazing opportunity.

It may be legal to take off in this, but it’s not usually safe.

The Cessna Citation 500 series was a great first jet and I learned a lot about flying turbine aircraft as well as how to be an effective first officer and part of the team. Other than the regulations, we didn’t have many set company rules to abide by. A lot was up to our judgment in regards to runway lengths, time on duty, and minimum visibility for takeoff since the regulations don’t restrict those for part 91 operators.

I learned from some accomplished captains. Three of them had single pilot waivers for the airplane so they were all sharp but welcomed reliable first officers that could help in high workload environments. Not only did I absorb valuable experience learning my role as a first officer, but I witnessed examples of how to be a good captain for later in my career. On the first flight, the captain asked me to work the radios and read the checklists as he called for them. After we took off, the tower controller at CAK handed us off to departure and that’s when I first experienced the sensation of speed that comes with flying a jet. I thought I misread the altimeter when I said 3,000 climbing to 5,000 within a minute of raising the gear. I couldn’t believe how fast we were traveling. We were barely in the air and were accelerating through 200 knots toward 250! As I grew more comfortable and could keep up with the plane, it became a wonderful home in the sky.

From time to time we would get a trips in the Citation V that would last three or four days. Being that we flew all part 91 missions and the airplane almost never moved unless the owners were in it, the captain and I would stay with the plane until the boss had struck “the deal” and it was time to come home. This often led to copious amounts of time to check out local restaurants and museums that I would have never been able to visit otherwise, and to explore wherever it was that we happened to be.

Many times we only had two legs on trips that would sometimes last two or three days. I didn’t get much flight time but those trips paid and as a flight instructor building time towards my coveted ATP, I was just happy to be there. Besides, I figured airline recruiters would prefer me to have more Citation time than a few more hours teaching steep turns in a Cessna 172. We flew for owners that went to Canada, so it was my first international experience too. The paperwork was intimidating at first but the actual flight was just as easy as flights within the US (aside from some thick French accents on the Center frequencies around Montreal). Not all of our trips were to exotic destinations but one particular trip landed us in Key West.

Our Florida trips always had early show times. An early show time wasn’t a big deal for a Parrot-head like me to get a paid for a pilgrimage to the Mecca of the Jimmy Buffet world, so I figured I was coming out ahead. The early flight meant getting to the airport at 5am to prep the plane for a 6:30am departure. Even if the aircraft owners were running late, we would be munching on conch-fritters with gentle steel drum music dancing in the background by early afternoon. The captain had taken the trip because it overlapped with his girlfriend’s birthday. A ticket on the airlines for her to tag along with him for a few days using his already paid for room meant I had a full three days to myself in Key West. I went to Margarittaville, saw the roosters roaming Duvall Street, and did my fair share of snorkeling. I also made sure to take plenty of pictures to prove to my parents how hard I was working. At the time I was training for the Chicago Marathon race and Key West made for a beautiful place to run. I was caught out in a pop-up thunderstorm while running, which made for a refreshing way to cool off towards the end of the run.

Sometimes a trip of a few hours can mean escape from winter temperatures.

A trip to Fort Myers in the Citation Ultra was even more enjoyable because it allowed for some escape from the Ohio winter, which by early February was feeling brisk. Relaxing in 70 degree weather for two days while being paid to be there. Sign me up! The captain on that trip introduced me to Brazilian steakhouses and the delicious meats and flavors my tongue didn’t even know existed. Oh, the rigorous life of a corporate first officer.

Airplanes like these bring new meaning to the phrase, “A mile of runway will take you anywhere,” because they take you there at 400 knots!

There are tough days flying corporate too. The time we couldn’t get out of Teterboro fast enough to get our passengers to a wake in Cleveland due to an unpropitious EDCT (Expect Departure Clearance Time) delay was stressful, but it was mostly good flying. I always felt useful, considering there was a specific purpose for each trip. The other aspect I enjoyed was the level of customer service we could render simply because we knew who we were flying. Flying an owner time and time again, I would get a feel for how they liked to operate in regards to their schedule and we would act accordingly. We even stocked the airplane with different snacks and their favorite drinks based on who we were flying.

There is a downside to this job that I should point out for anyone considering a similar position as mine. I suppose in some ways you could consider it an occupational hazard of sorts. Once we arrived home in Cleveland from our trip to Fort Myers and the owners had left, the captain and I were tidying up the airplane to put it away when I noticed he appeared to be experiencing some shoulder pain. The captain kept rotating his arm as if he were trying to stretch it. The line guy with us asked if he had perhaps hurt it sleeping in a funny position on the hotel bed to which he replied. “I think I swam to many laps in the outdoor pool.” Needless to say we didn’t get any sympathy from line service that day.

What can I say? It’s a rough life that I hope to make a career out of.

More travel, less tourism – how aviation can take us beyond the guide...
Scroll to top