Blog - Latest News
You are here: Home1 / Article Archive2 / What I Know About...3 / Seven things I know about flying in California 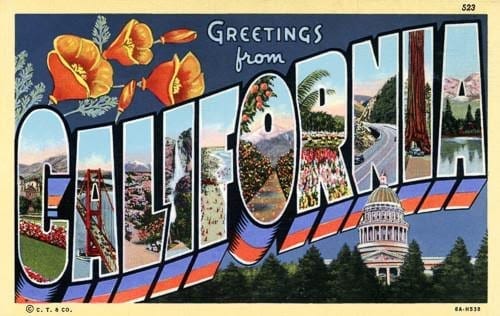 California is a huge state and to sum it up in a few bullet points doesn’t truly do it justice. You must fly there to fully experience it yourself so “Go West, young man!” With airline service and a checkout from one of the many FBOs, it’s possible to experience California flying on a vacation if only for an afternoon. You may not even need a separate checkout thanks to companies like OpenAirplane that allow members to do a checkout flight at home, or any other OpenAirplane flight school, and have flying privileges in that type at FBOs and flight schools anywhere in the network – eliminating the checkout requirement during your trip.

Depending on where you fly, you will encounter a wide mix of dense city areas with almost nowhere to land should an engine fail, farmland, jagged mountains, and inhospitable deserts. I imagine the mountainous areas in California are similar to the surface of the moon, just with much more color. The transition between these types of terrain happens quickly. The mountains rise up just outside of the cities so, if you plan to fly at night, be sure to carefully choose your route to avoid the terrain. No one lives on the mountains themselves as they’re often zoned as various types of parks or conservation areas. Not having structures on them means they won’t be covered in a blanket of lights like large cities are. This makes the mountains difficult to see at night which can lead to a controlled flight into terrain (CFIT) accident. Proper planning will ensure the next one won’t be you.

2. California can be hot in the summer.

Temperatures at Palm Springs can soar well above 110 in the summer. Be prepared.

Airports such as Blythe (BLH), Imperial (IPL) and Palm Springs (PSP) routinely see highs in the 110-120 degrees F range during the afternoon, so dress for the weather. It is an absolute must to bring a large bottle of water to drink in case you are stuck somewhere or have to land off airport. iPads overheat and, after touching paper flight plans with sweaty hands, they may become so wet that it’s impossible to make notes on them. The northern areas, especially inland, north of Bakersfield, are more reasonable with highs in the upper 80s.

3. The high temperatures can result in dreadfully high density altitudes as well.

Big Bear City Airport, situated at 6,752 feet, frequently sees density altitudes above 8,500 feet in the summer. I reviewed a legacy Cessna 172 POH and found that the ground roll requirement in summer at Big Bear doubles from the distance required at sea level. The runway at Big Bear is almost 6000 feet long, but on a hot day, that might not give much extra room after accounting for POH numbers plus your personal minimums for runway length.

Barry Schiff did an experiment on aircraft book performance versus what they actually do on ABC’s Wonderful World of Flying at Big Bear. Check it out on YouTube when you get the chance. The entire series is posted online and features a host of aviation writers doing warbird checkouts, sharing flying tips, and even flying trips to Europe in GA airplanes. You may watch the entire series in a few weeks like I did.

Barry Schiff’s density altitude demonstration is in episode 1 of season 1. He uses a 172, P210, and Bonanza in his test. All of the aircraft used more runway than their advertised book numbers. Review your aircraft’s performance data before flying into the high country and give yourself a healthy margin on top of that. You’ll be glad you did.

4. The California terrain has lent itself to some really cool airports.

Pilots can fly to Catalina Island (“The airport in the Sky”), a mere 25 miles off shore from Los Angeles, land on the famous runway 16R at Van Nuys and fly to some other airports that are lesser known but have equally cool bragging rights. While flying into Cochran Regional Airport you’ll watch your altimeter unwind on short final because it won’t stop at sea level. Don’t worry! You have the correct setting in the Kollsman window and your next annual hasn’t suddenly become more expensive. You’ve just landed below sea level. There are five below-sea-level public airports with paved runways in SoCal alone and more when you include the private airports and dirt strips available in the state that sit as low as 210 feet below sea level at Furnace Creek airport (L06) near Death Valley.

5. With all the people crammed into such a compact area as Los Angeles, it’s no surprise that aircraft noise has been a hot topic among residents.

Many airports in California have procedures designed to reduce aircraft noise. These usually consist of flying a heading to avoid certain areas or climbing to an altitude on departure and limiting operations at night. The Santa Monica airport has been under extreme scrutiny from the city over noise concerns. The city has limited operations on the field via shortening the runway and currently prohibits many categories of turbine aircraft.

Touch and goes, stop and goes and low approaches are also prohibited during certain times as well. Public perception of airports is largely based on the airport being a good neighbor. No one likes a neighbor playing loud music at all hours of the night. If we all fly quietly and follow the noise abatement procedures, we can keep our freedom to fly and access to these valuable airports available for many years.

6. Forest fire season can be a scary time for California residents and home owners.

These deadly waves of destruction rip through neighborhoods destroying property and taking lives. As a pilot, you’ll need to avoid the TFRs that pop up to allow for firefighting aircraft. They are easily depicted in apps like ForeFlight so choosing a route that doesn’t interfere isn’t a chore and ATC will usually help you out too. Firefighting aircraft must always be given priority.

GA aircraft and drones present a collision hazard. Tanker 10 is a company that specializes in fighting forest fires by dropping water and other fire retardants with converted DC-10 aircraft. Keep an eye out for Tanker 10 on your trip and you may see their orange and white aircraft holding court on the ramps at bigger airports.

Just because you aren’t in the TFR doesn’t mean your flight won’t be affected. The smoke and ash from these fires rises up into the atmosphere and blows well downwind of the TFR, which can obscure visibility. The ash provides condensation nuclei so moisture can condense and clouds form, creating more IFR conditions.

The cool part about forest fires can be experienced while flying in an unpressurized airplane. While flying downwind of a forest fire, you’ll be able to smell the scent of the fire. It’s not overpowering, but there’s a sweet campfire smell from the pines and other shrubbery burning below. You won’t need to be close to experience this. Even small- and medium-sized fires will produce this 20-30 miles downwind from the fire.

7. Marine layers are a weather phenomenon common in the coastal areas of California.

These air masses contain a mixture of fog and stratus clouds. They form in the morning when air blows inland from the Pacific Ocean and sometimes take until early afternoon to clear. They can bring airport arrivals to a screeching halt because airports can go well below category one ILS minimums. Forecasting when the layer will clear is difficult because of the many factors involved.

Wind, temperature and high cloud cover shielding the colder air mass from the heat of the sun all play a role in how long it takes to get back to VFR weather. Due to the inversion which causes the marine layer, the air above the layer will be warmer and the tops tend to be flat. If you don’t get to fly on top of clouds often this might be your chance. It’s a fun treat watching the shadow of your airplane run along the white canvas tops of the clouds.

Consider flying to California if you are thinking about taking a flying vacation. There are plenty of full service FBOs ready to roll out the red carpet for you. Atlantic Aviation in Palm Springs even has a complimentary outdoor swimming pool for guests so the kids won’t have to wait until you get to the hotel. If the big cities aren’t your style, you can visit the rural strips that allow camping and you can get away from it all. There’s something there for everyone so go out and explore.

Feeling helpless on my second solo cross-country
Scroll to top