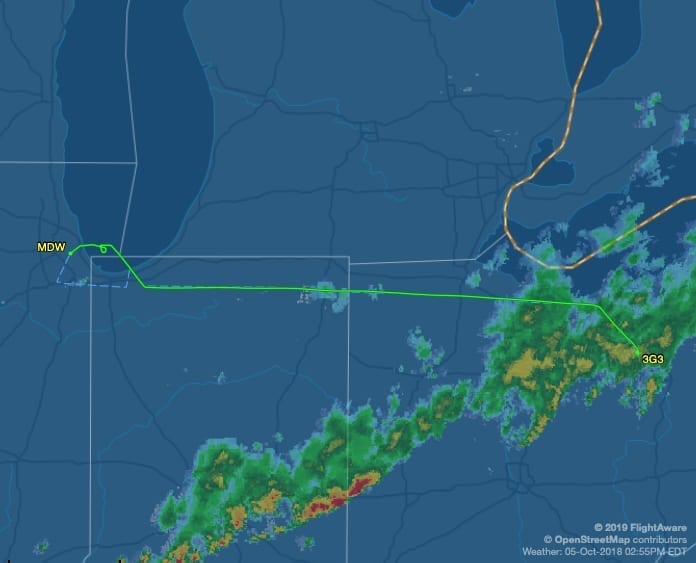 For some pilots the idea of taking family for a weekend trip is the reason they get their license. We live in one of the best countries to fly, and I think it’s important to go out and enjoy it. Getting a $100 hamburger and boring holes in the sky on weekends is fun but we’re kidding ourselves if we say airplanes are personal transportation machines while only going to a few other airports in the local area to practice touch and goes.

Last October my parents and I flew to the 2018 Chicago Marathon. We could have driven six hours from Ohio and paid $70/night to park the car at the hotel, flown commercially, or taken the flight school’s Piper Arrow on the 275nm flight. We elected to take the Arrow. The Arrow is not particularly fast, nimble or sexy, but it’s a reliable airplane that fits my needs for trips like this as long as I don’t have a reason to take off from a runway shorter than 2500 feet.

I especially like how much fuel it can carry for trips that take me into weather. The Arrow IV at my flight school has 72 gallons of usable fuel and burns ~10 gallons per hour in cruise. Our Arrow is well equipped for instrument cross-country flights with a back-up attitude indicator, HSI, Garmin 400 GPS, 2-axis autopilot and a JPI graphic engine monitor (GEM) for more precise engine monitoring. I completed my Commercial and CFI rating in the Arrow and like to take it on trips once or twice a year.

Step one: get to Chicago.

The mission was to fly to Midway on Friday night: my parents would run the 5K Saturday, I would run the marathon Sunday, and we would all return home on Monday. I’ve found Midway to be the best way to access Chicago using a GA airplane. Taking the Orange Line into the Loop is great because it gets you anywhere downtown in about an hour after landing. The 100LL sold at MDW is expensive but purchasing the minimum waives the ramp fee and the cost of going to a full-service FBO becomes more reasonable given the location. I still wish Meigs Field was an option like Burke Lakefront is in Cleveland, but that just isn’t the case anymore.

On departure, showers covered the Akron area and threatened to douse us during the preflight so we left for the airport early to stay dry. The winds aloft forecast showed a small lapse rate, common in the fall, predicting smooth air along our route. All the PIREPs for turbulence were in the flight levels so the only challenging part of the flight would be getting into Midway with all the jet traffic. The TAFs for MDW, ORD and other airports in the Chicago area were calling for low ceilings (below 1000 feet) and visibility between 3-5 miles and decreasing overnight. The radar showed some yellow approaching the airport from the west so for good measure and to keep Momma happy I filed from my home airport Wadsworth, Ohio (3G3) to Dryer VOR and then direct to BAGEL to join the Pangg.3 arrival.

We climbed through a layer and, after passing the line of rain, found ourselves on top of an undercast at 6,000 feet. The three-hour flight gave me plenty of time to watch the weather in Chicago through the ADS-B weather on my iPad. At one point enroute, O’Hare was reporting RVR of 5500-6500 and MDW was down to 1 1/2 miles. Not ideal for getting aerial pictures of the skyline but we could still get in so we carried on.

Once we arrived in the terminal area, the weather at Midway had improved to 3 sm visibility and 500-foot overcast. ATC vectored us for the RNAV Z 22L and we broke out about 200 feet above LP minimums. The flight was early enough in the year that ice wasn’t a threat but another month or two would have probably changed that. Atlantic was happy to drive us to the Orange Line and we went downtown to check in at our hotel and see the Marathon expo. The forecast was for ceilings to drop to overcast at 300 feet overnight and the visibility dropped with the arrival of a cold front that evening.

Running the streets of Chicago is a memorable experience.

Walking around downtown Chicago and seeing the buildings stretch into the clouds was a unique experience for someone from a small town in Ohio. I’m sure I looked like a tourist. The buildings rose hundreds of feet into the sky and never stopped. The energy of the city, elevated for Marathon weekend, hyped me up for the race. I felt waves of excitement and fear wash over me in anticipation as I cheered for my parents during the 5K.

The day finally came for me to run my first marathon and it was awesome. The 44,000 runners were cheered on by people lining the streets for miles. The spectators screamed, played music, held “chaffing the dream” and “worst parade ever” signs propelling runners like me around the city. It was an experience I will certainly not soon forget.

After some celebratory deep-dish pizza (another reason to fly to Chicago) and recovery Sunday night, it was time to fly home. The weather Monday was much more agreeable than it had been when we arrived. A warm front snaked west-east along the Michigan/Indiana border towards Cleveland with short, building cumulus clouds speckling the route home.

We filed for 7,000 feet but after getting bumped around in the clouds decided it was time to hunt for some smoother air at 9,000 feet. It’s hard to out climb the weather in a non-turbocharged single-engine piston, but we were able to find a comfortable ride most of the way home, dodging a few larger build-ups that probably rose to the lower flight levels later that afternoon. Once we were within 20 miles of home and things began looking familiar again, I cancelled IFR and landed in Wadsworth.

Cloud surfing is the way to fly cross country in an Arrow.

I’m lucky that the owners of this particular flight school encourage pilots to take their airplanes on overnight trips. Not everyone owns a plane or has access to rental aircraft that are permitted to be taken overnight. If you do, I suggest you take advantage of the opportunity. I have been fortunate enough to do five trips to Oshkosh, the Chicago Marathon, visit First Flight Airport (FFA), and see my sister during family weekend at her college in Wilmington, North Carolina, all as a renter pilot because of these generous policies. If you aren’t sure if you can take the plane, ask. The worst they can do is say no. As long as you plan to put a reasonable amount of time on the plane when you have it, it may not be a big deal.

I would recommend asking to fly an airplane that isn’t heavily used for training on the weekends if you are planning a weekend trip, though. Having an instrument rating and being proficient is all but essential for completing these types of trips reliably. Without it, you may find yourself stuck somewhere and the flight school is without an airplane for some unfortunate students Sunday evening or Monday morning. An instrument rating would definitely help your case if you need to convince an owner that may be reluctant to have renters taking their plane overnight. They would be more likely to allow a long-time, instrument-current customer who flies often to take the plane than a VFR pilot who only flies a few times a month in the summer.

After putting the plane away in Wadsworth, the final tally was 5.7 hours on the Hobbs and 50 gallons of fuel for the trip. The older pilots at the airport make it sound like this was the way it used to be back in the 70s during the glory days of general aviation. I’m sure it was a great time to be a pilot then, but it doesn’t mean the future can’t be as good or even better. I know plenty of pilots at my airport who enjoy afternoon trips for ice cream and some who take their airplanes on trips regularly. The numbers may not show it directly, but I think spirit of general aviation is still alive and well. Let’s all work to keep it that way.

One last airplane ride for Dad