Blog - Latest News
You are here: Home1 / Article Archive2 / I was there3 / The most important bags aren’t suitcases 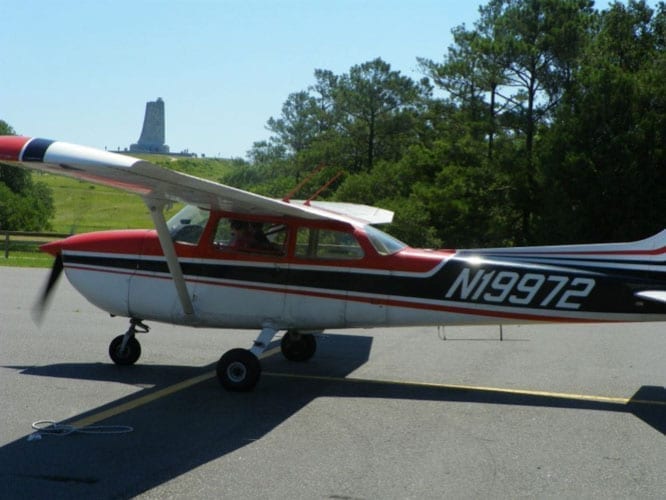 My family had decided to take a big vacation to the Outer Banks in North Carolina the summer after I graduated from high school. My dad’s side of the family is quite large and all the kids are separated by a year each so we’ll have one high school graduation every year for the next eight years. My older cousin had graduated the year before so we knew this would probably be our last chance to do a big family vacation. In a few years, everyone would be going off to college and starting our adult lives so we decided to go all out and rented a big house on the beach.

I was excited for this trip because I had just finished my private pilot license in March and had the idea of flying down to avoid the 12-hour drive from Ohio. We couldn’t get the airplane for an entire week, but the flight school let two of my friends, Hans and Mike, fly a Cessna 172 from Akron, Ohio, to First Flight Airport (FFA) on Friday, stay the night and we would fly back Saturday together. Overnight parking at First Flight isn’t prohibited, but all parking is limited to 24 hours at a time. My friends were able to get a free night in a beach house, we all did some flying on the trip, and I didn’t have to sit in the car for 12 hours on the way back home to Ohio. It was a win for all.

A pilgrimage every pilot should make.

Visiting the location of the first powered flight was surreal. We visited First Flight Airport during the week to see the museum and memorial. There’s a small airport attached to the memorial with a small building with computers for filing flight plans, checking weather, etc. The museum is a nice afternoon, but three hours is probably all most folks spend there, less time for non-aviation buffs. After a few days in the Outer Banks, it’s easy to see why the Wright Brothers chose this location for their attempt. Walking up and down the beach, there are kites of all shapes and colors and one of the piers has a wind turbine farm on it to produce electricity.

Despite none of us having instrument ratings at the time, the weather looked great for both days and we decided to give it a go. My friends flew down Friday and arrived well before dark before the airport closes. We had dinner, looked for the crabs on the beach that come out at night, spent a little time in the hot tub and had a great evening.

In the morning, we ate breakfast and headed out to the airport for the journey home. We took a quick flight around Nags Head before we left and each took turns landing at FFA so we could say we had done it. Then we set out for home. It was a beautiful day. FFA does not have fuel available so we stopped at Louisa County (LKU) in Virginia. By this time lunch seemed appropriate but without packed lunches or an airport diner, we decided to get what we could from the vending machine. I had a can of Sierra Mist and some peanut butter crackers for lunch. Not a healthy lunch my mother would approve of, but it would have to suffice for now. In three to four hours, we would be home and could sit down for a nice meal.

Mike had flown from Akron to LKU on Friday and Hans had flown the other legs (LKU-FFA-LKU), so this was my leg of the trip to fly. Having earned my license only a few months ago, I was building cross-country time towards my instrument rating. Since I had a safety pilot along, I planned to track VORs on the way home while under the hood and log some simulated instrument time.

The Alleghenies rose to 4770 ft. along our route so I planned on flying back at 6500. This proved too low to escape the turbulence that developed that afternoon and I climbed to 8500 ft. in search of a smoother ride. It was better, but not great at 8500. I wasn’t feeling good staring at the panel bobbing around in the turbulence so an hour into the flight I abandoned my plan of flying under the hood and did the rest visually. I wanted to stop any airsickness before it developed further. I’ve rarely been able to feel better during a flight after becoming airsick.

I can sometimes stop it from getting worse, but once I get sick, I stay sick until I am on the ground for a while. I should have never gone under the Foggles in the first place though because the sights over the mountains were awesome. Once I looked up, I saw a few small towns dotting the landscape but for the most part there was nothing but beautiful rolling hills for miles around. Unfortunately this didn’t resolve any conflict between my stomach and the Sierra Mist I had earlier with “lunch.” The bumps continued and my body did not appreciate it.

What are friends for?

I had a gurgling feeling in my stomach that meant only one thing and it would happen soon. I didn’t have a bag handy so I told Mike who was in the right seat “your controls,” took off my headset, opened the window and let it all hang out. The wind pulled my sunglasses off my face and gravity took them to the ground below, never to be seen again.

The unfortunate part about this is as I was spewing out the window like an overheated radiator with Mike laughing as he flew from the right seat, Hans, who was asleep in the back seat, later said he woke up startled because he thought we had flown into a cloud and were now VFR in IMC. I figured he might have been woken by the air rushing into the cabin from opening the window but he said he thought we flew into a cloud because he felt light, wet sprinkles on his face.

Once I connected the dots I was horrified. I had thrown up on one of my best friends. The damage was done and until we landed there was nothing I could do about it but apologize. Once it happened, my stomach was fine the rest of the flight. I normally don’t drink a lot of soda so drinking all that sugar on an empty stomach and flying on a hot bumpy day was what did it.

So take these words of caution: especially on long flights, take a sick-sack with you. You just might need it. I’ve only wanted it a few times, but having a couple in a flight bag in the back seat or stuffed into the seat pocket isn’t as good as ready to go, in your lap or shirt pocket. When you start to feel it, get the bag out and ready.

Next, the airstream around a 172 blows any liquid ejected from the pilot side cockpit window both out and most importantly back into the cabin. Nothing is off limits to getting splattered on and the clean up on the ground is humiliating as you try to describe to the next renter how a can of soda led to your own demise.

Finally, if you do manage to puke on someone and live closer to the airport than they do, let them shower at your house and take them to dinner. That way you’ll still be friends five years later. I’m sorry, Hans! Next time I’ll be more prepared.