Blog - Latest News
You are here: Home1 / Article Archive2 / History3 / The forgotten story of the first helicopter patent ever issued 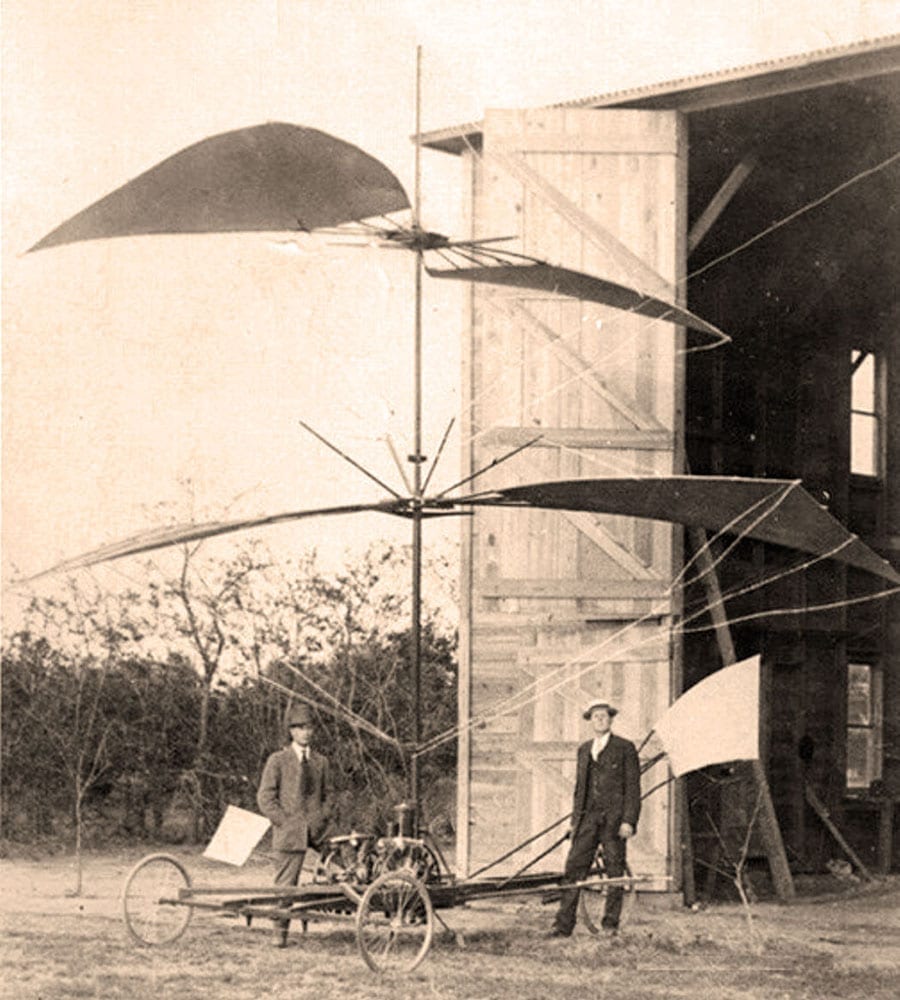 Kansans are a hearty folk, a salt-of-the-earth kind of people who just get a job done. Home is the high-plains, smack in the middle of the country, where there isn’t much to get in the way of a wind that averages 13 mph. It’s a place where little is wasted, the treeless expanse utilized by crops, cattle, and wind turbines.

Years ago, while driving across the state towing a camper, my wife and I stopped in a friendly town park at the end of the day. Throughout the night, the insistent wind whistled and rocked the trailer. At breakfast the next morning, I asked a young workman, “With this wind, how do you carry a sheet of plywood from your truck to a work site?”

Puzzled, he faced me square-on and asked, “What wind?”

Kansas is not usually considered the birthplace of helicopters.

Maybe it’s that kind of “get-it-done” attitude that allows Kansas to claim the title of “Air Capital of the World.” To be sure, the seeds of flight were planted at a bicycle shop in Dayton and germinated in the sands of Kitty Hawk. But it was Kansas where general aviation set its roots deep, cultivated by the likes of Clyde Cessna, Lloyd Stearman, Walter Beech, Al Mooney and countless others. Closer to experimental aviation’s heart would be Leavenworth County, Kansas, where EAA founder Paul Poberezny was born.

A recent trip found us eastbound on I-70, entering the northwest corner of Kansas. Marie and I stopped to stretch our legs at the Goodland Travel Information Center.

It was one of those serendipitous moments when my EAA hat led me into an aviation-related conversation with the person on the other side of the counter. He asked if I had been to the local museum that housed the first helicopter ever patented in the United States.

His directions guided us to the High Plains Museum, where a full-size replica of the Purvis Helicopter resides.

What follows is not really a story about Kansas, but it is very much a Kansas story.

In 1909, just six years after the Wright Flyer took to the air, a mechanic working in a machine shop at the Rock Island railroad yard in Goodland had an idea inspired by the sight of several children playing with a whirligig. Thirty-eight-year-old William Purvis enlisted the help of his 20-year old co-worker, Charles Wilson, to help him build a flying machine that could fly low and slow to deliver freight and mail.

One way to solve the issue of torque is to use two counter-rotating “rotors.”

Recognizing that Newton’s Third Law of Motion dictated that the body of the proposed craft would spin with the rotor, the partners drew up plans that solved the torque problem by utilizing a pair of counter-rotating paddles. Two 24-foot vertical, cast-iron shafts, one turning inside the other, driven by twin motors, turned 20-foot canvas sails supported by wires. The entire mechanism was mounted to a three-bicycle-wheeled cart. Local lore has it that the Rock Island machine shop was an unknowing contributor of parts needed for the construction of the craft.

Lacking the funds to buy the motors, Purvis and Wilson arranged a brief, tethered demonstration powered remotely by a steam-driven belt. The event proved inspiring enough for the townspeople, who proceeded to put out a total of $30,000 for shares in the Goodland Aviation Company. The two partners became the toast of Goodland. It was reported that residents picnicked at the Purvis farm on weekends, watching the two men tinker with their creation.

With the investors’ money, two 7-hp motors were obtained and mounted, and a flying demonstration was planned in the town square. What happened next has been the subject of considerable speculation, some more fanciful than others. All of it is unsubstantiated and has become part of the local folklore.

The consensus is that the craft simply tore itself apart as the rotating sails gained speed. However, some claimed that the untethered helicopter did briefly become airborne with William Purvis aboard. But directional control was lacking and the craft crashed, flailing itself to pieces as Purvis ran for his life, headed out of town, never to be seen again.

In 1982, Mary Collett Farris authored an account titled “The Short Happy Life of the Kansas Flying Machine.” It contains what is possibly the most creative account of the disaster that followed:

“Purvis was just in time to see the water tank coming toward him at an alarming speed. Desperately, he stretched out his hand to fend it off, but it was too late. The blades shattered on the tank and the platform buckled. The huge iron rotor shaft plunged through the water tank and busted it wide open. Thousands of gallons of water cascaded out onto the crowd. Parts of the flying machine pelted the audience. People dropped to the ground under aerial bombardment, just as the water rolled over them. It was like doomsday.”

The company failed, but they did get a patent.

Whatever did occur that day, the local paper wistfully reported that “The Goodland Aviation Company has collapsed very much like a balloon when punctured. They have gained some experience and lost some cash. Nobody complains and nobody blames.”

What is certain is that the technology of the time proved unfit for the job and the dream of the townspeople died. William Purvis and his family ultimately relocated to Wisconsin, while Charles Wilson went off to work at the rail yards in Kansas City. The partners never saw each other again.

Though the venture failed, in 1912 the U.S. Patent Office issued the first ever patent for a rotary winged aircraft to the then defunct company.

There is one remaining fact to disclose. The gentleman at the visitors center who recognized the EAA logo on my headgear and directed us to the High Plains Museum had a name tag on his shirt.

And the answer to your next question?

The most important bags aren’t suitcases

Friday Photo: Cincinnati from a Caravan
Scroll to top