Other than a glowing instrument panel, there was total blackness inside the monster machine that was meant to represent the cockpit of a T-something. In 1969, the surplus simulator with its primitive computer took up most of a room in the Aviation Building at Lewis College. My roommate, Newt, was a student at the aviation school. I was an undeclared sophomore, on more or less of a BA track. 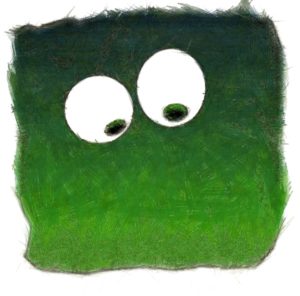 It sometimes feels like you’re fighting a monster when you’re flying a sim.

While I sat inside the machine, Newt stood in front of the control console, staring at the switches and dials, scratching his head. How hard could this be? Without benefit of supervision, two model airplane nerds managed to fire up the donated beast and took turns testing non-existent piloting skills. As I fully expected, my takeoff was great. However, my attempt to land the thing left me roaring along inverted (cool!) at what the instruments indicated was 200 feet BGL. I may have been overconfident.

Shortly after the state eliminated its college grant program, I left Lewis to begin a dazzling career as a commercial artist drawing stick figures for gum balls. (Hey… those things don’t draw themselves.) Without me inhibiting its potential, Lewis College grew into Lewis University. Newt went on to become an honest-to-goodness A&P mechanic and landed what turned out to be one of the briefest jobs in aviation history with an aircraft maintenance shop at a busy GA airport near Chicago.

The good news is that Newt’s decision to place a hot work light under the unbuttoned engine of a Cessna while loosening a fuel fitting left him more stunned than seared. The bad news is that his career in aviation ended that day with only an extra-crispy Lycoming and a sooty smudge on the hangar ceiling to show for it.

Meanwhile, at the University of Illinois, two more-capable roommates wrote a computer program for their Apple II, calling it A2FS1 Flight Simulator. Bruce Artwick, a computer graphics guy, along with marketing student and pilot, Stu Moment, formed a company named SubLogic to sell their home-grown computer games. With their program a person could fly a simulated aircraft over a five-square-mile grid of primitive wire-frame graphics. It was outstanding! By 1984, they ported it to the more affordable Commodore 64, where the program gained color graphics and additional scenery. It even had a dogfight game built into it. My very first computer was a C64 purchased specifically to run Flight Simulator II.

In short order, Kraft, a manufacturer of radio-control systems for model airplanes, used their expertise in three-axis gimbal controller technology to manufacture joysticks for computers. Things were getting real!

Soon it was possible to buy six additional scenery disks that covered states in the western US. At the time, Computer Gaming World noted that the disks should really be referred to as “airport disks more than scenery disks, as the airports are there but the scenery is sparse.” Nevertheless, our imaginations filled in what was lacking.

Microsoft came knocking at SubLogic’s door in the early 1980s to get them to build an IBM version of the flight simulator. With the power of 16 bits and more available memory, an improved instrument panel, shaded graphics, and views from a chase plane and control tower became possible. 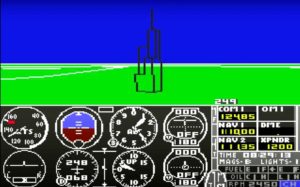 In the mid 1990s, an exceptional computer geek by the name of Austin Meyers, frustrated with “the obvious lack of anyone else doing the job right,” created his own flight simulator program. Meyer’s brainchild, X-Plane, earned kudos for its highly realistic flight physics due to its use of blade element theory to compute the forces, moments, and parts of aircraft in real time. I have no idea what any of that is, but it sure sounds cool. Today, Meyer and his company, Laminar Research, continue to push X-Plane 11 to new heights.

As always, computer hardware and software keep leap-frogging each other. The ability to run the latest version of a flight simulator becomes the primary reason for serious simmers to upgrade their computers. Like most mortals, I’ve never been able to afford the heavy-duty computer hardware needed to watch sim scenery run smoothly at blazing refresh rates. It still amazes me when the view out of a real airplane window doesn’t stutter.

This past year, after 14 years of ignoring the last edition of their flight sim program, Microsoft released a completely reworked version with what appears to be astonishingly realistic graphics. Running it might dim the lights at Fermi Lab, but it gives my old laptop something to aspire to.

Though this pandemic year of self-quarantines may have put a cork in my ability to log actual flight time, there have been bright spots. My 2006 version of MS Flight Sim X and its Garmin 430-equipped Cessna 172 is capable of linking wirelessly to ForeFlight on my iPad to make it think it’s in a real airplane. That may not help with pattern work, but it’s a useful way of keeping navigation skills fresh.

My sim software may be outdated by 14 years but it is smart enough to recognize that an indication of 200 feet BGL is definitely a hard stop. Good sim!

Three brothers, all priests and pilots
Scroll to top