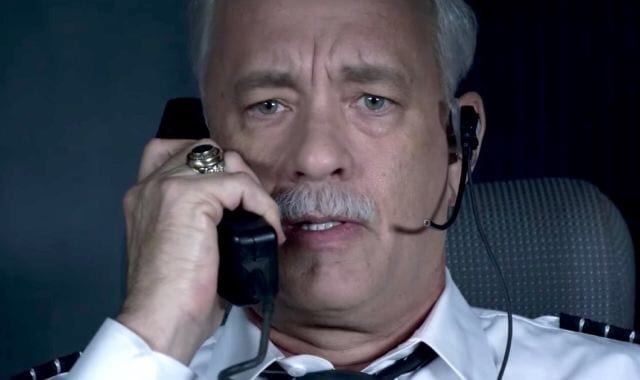 Let’s cut right to the chase – Sully is a movie that any pilot, and especially an airline pilot, can watch without being mortified by technical and artistic errors on the part of the filmmakers. The portions of the movie that depict the flight and the water landing are done to near perfection. Tom Hanks and Aaron Eckhart not only play the role of airline pilots superbly, but they even manage to look a good deal like the originals. The cockpit banter before the takeoff is completely believable, as is their depiction of the reaction of Sully and Skiles to the event itself. The in-flight dialogue is all from the CVR, but these fine actors bring it to life in a manner that fully evokes the triumph of discipline and training over the fear that must have existed during those three minutes, to say nothing of the pilots’ reaction to being alive when the airplane came to a floating stop in the icy river.

“Brace for impact.” It could apply to the movie too.

An A-320 pilot will feel right at home in the “cockpit” depicted here — the up-front scenes are the most realistic depictions of an airliner flight deck I’ve ever seen in a Hollywood movie. The cabin shots, both in the air and on the water, are also spot-on. The external visuals are excellent, and you can see how far CGI has come in believably depicting an airplane in flight. Of course, in this movie it’s mostly obvious which scenes are CGI – after all, no one had a camera in a chase plane that day following the Airbus down the Hudson River! But there is one scene, the takeoff roll, that I’m unsure about, and the fact that it is a tossup for me is a good indication of the state of the computer graphic arts today.

But the depictions of the actual flight, although they take up considerably more on-screen time than the 200 and some odd seconds of the real event, are by no means the whole movie; much of the screen time is devoted to the investigation that followed. It is here that the groaning may begin, at least on the part of real NTSB personnel.

As you undoubtedly know by now, the investigation is portrayed as a somewhat antagonistic affair, and it apparently borders on being unflattering to real investigators, if some accounts in the press are to be believed. And there are significant elements of creative license in evidence; for example, the simulation studies and the CVR analysis would surely have been done before the public hearing, which is a recap for the benefit of the press and public, and typically is just about the last event of the investigation prior to the development of the report. The actual NTSB report bears no hint of any insinuation of error on the part of the crew, nor does the video, available on YouTube, of the so-called Sunshine Meeting held at the NTSB. The issues raised in the movie depiction are indeed raised in investigations, but more to learn the lessons and discover better ways of doing things than to “hang” the crew — especially in this case.

Was the river the only option?

What does come through clearly, in the depiction of the aftermath of the flight, is the post-event soul searching and surrealism that affects anyone responsible for the lives of others. One thought I was left with, after the movie, was… if this is how it felt to have done everything right, what on earth must it feel like to actually err and survive?

Perhaps the most interesting aspect of this movie, for me as a pilot, was the fact that the filmmakers have, in essence, raised the question of a return to the airport as a desirable and viable alternative in a situation like Sully and Skiles faced. Turning back to the departure airport following a loss of engine power immediately after takeoff is often referred to as “the impossible turn” due to the poor probability of completing the maneuver from a low altitude. The urge to return to the takeoff runway can be overwhelming, particularly in a single-engine airplane, and many pilots have, over the years, succumbed to that urge, often with deadly results. All student pilots are taught the dangers of the impossible turn, and the prevailing wisdom is to land more or less straight ahead with no more turning than would be needed to avoid something really solid on the ground.

Although the nearly 3,000 feet of altitude they achieved prior to the bird strikes would be more than enough to turn back to a nearby airport in a small plane, the flight dynamics of a large transport category jet placed Sully and Skiles in a marginal position. Only with foreknowledge of the bird event could they have had any safe chance of making it to an airport, and no guarantee that ATC could actually have a clear runway waiting for them if they did. With no real chance of a landing on an airport runway, they had only one alternative.

It would be safe to say that every pilot who has flown even once in the greater New York area has given some thought to the issue of where to put the airplane down if all thrust was lost. A quick glance at Google Earth will confirm that there is simply no acceptable real estate, other than the several New York airports, upon which to safely land an airplane. Of course a small plane could be landed on Jones Beach or some other beach, or maybe on a highway if traffic was not too bad (guess again!); and even if the pilot rolled it up into something of a ball in the attempt, the low speeds achievable by small planes might make such an event survivable. But large passenger jets do not fare well on anything other than a paved runway. Except water.

Sully had apparently considered this question well in advance of January 2009, as had I. I had long ago come to the conclusion that if some circumstance rendered any airliner that I was in command of without power at low altitude around New York, absent a slam-dunk glide to a runway it would be into the drink and trust that the pictures in the operating manual depicting the airplane floating serenely on the surface bore some resemblance to the actual outcome. The jet age had offered little assurance that this might be so, but looking farther back things were a bit different.

Few people today recall the name of Captain Richard Ogg. On October 16, 1956, he was in command of Pan American flight 943 from Honolulu to San Francisco. The Boeing Stratocruiser lost two of its four engines just about at the so-called “point of no return,” midway between Honolulu and San Francisco. With insufficient fuel to reach land, Ogg was faced with the need to ditch. Fortunately there was a Coast Guard cutter in the area, stationed along the route to serve as a radio communications relay and a search and rescue platform. Ogg circled the cutter until dawn, at which time he executed the most successful ditching ever accomplished at that time. All 31 people on board were rescued by the cutter Ponchartrain.

Clint Eastwood seems to have focused on realism over Hollywood drama.

Sully probably knew of this event, and also that history shows that ditchings are, in fact, often survivable. In what is, to me, his greatest achievement in this entire event, he moved quickly and decisively to embrace and execute his only viable option. He turned his back on the Impossible Turn. Had he dithered, perhaps out of an urge to find some dry land to make use of, even the Hudson River alternative might have been lost.

A pilot I flew with when I was a pilot at American Airlines, Susan O’Donnell, was a jumpseat rider (seated in First Class) on flight 1549. After seeing the movie, she offered these comments from one who was there:

“I thought the movie was very well done. Other than the obvious necessity to compress the timeline of the investigation to fit a dramatic movie story structure, I believe the high points were well depicted. The depiction of the water landing itself and the ensuing rescue was well done. Although there was a little dramatic license used in some of the details, the filmmakers did a good job of capturing the essence of the landing and rescue. I can say that (it was) more chilling to watch than I had anticipated. Captain Vincent Lombardi played himself as the first ferry boat captain to reach the scene; this was an excellent choice and added realism. Tom Hanks’ Sully was focused and confident, without being soulless and mechanical; Aaron Eckhart’s Jeff was professional and supportive. I have no trouble believing that was a fairly accurate characterization of the atmosphere in the cockpit during the event. Hearing Tom Hanks deliver the ‘brace for impact’ line was eerie. The simulator scenes showing pilots recreating the flight’s profile in an attempt to return to an airport were performed by actual active pilots qualified in the airplane, and thus the scenes were presented in a realistic manner. Overall, I thought it was an excellent film, free from the eye-rolling moments from which so many films about aviation suffer.”

So there you have it. Clint Eastwood has delivered a film that puts you right on board the airplane in a remarkably realistic way. They may well use this film in airline crew training for some time to come. The only thing I can think of to make this experience more realistic would be to partially flood the theater with ice water at the appropriate moment. It is probably fitting that everyone involved in this incident personified one of Clint’s best movie lines: “Improvise! Adapt! Overcome!”