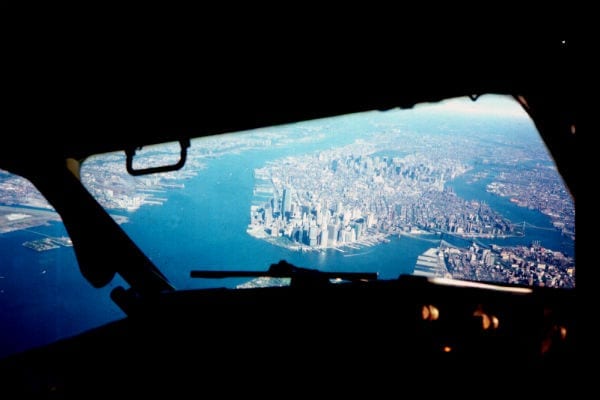 A special Friday Photo this week, as longtime contributor Tony Vallillo shares three of his favorite shots from his 31 years as an airline pilot.

The view: Manhattan from aloft, on the Expressway Visual Approach to 31, as it was called then.

The pilot: Unkown, except for the fact that I was the FE and took the picture. Neither the captain nor the FO is visible in the picture.

The mission: An American Airlines flight into LGA, quite likely from ORD, in the summer sometime between 1978 and 1983.

The memory: The time was the late 1970s, as I was embarking upon my airline career. Ours (mine, the first officer’s and the captain’s) corner office view was the best in the world, as you can see in this picture looking over the captain’s shoulder as he begins the Expressway Visual approach to runway 31 at LGA on a beautiful summer day. The Big Apple in all its splendor lies ahead and below, and within an hour some of our passengers on this Boeing 727 will be navigating the man-made canyons of the city that never sleeps. The view from the flight engineer’s station, even though not a window seat, was still spectacular.

The view: Up from under – an A-340 passes directly above us on the North Atlantic Track system from Europe to North America

The pilot: Airbus pilot unknown. I took the picture, of course.

The mission: Carry a plane load of people plus some cargo from the Old World to the New.

The memory: Seeing other airplanes on the North Atlantic Track system is nothing new, although in older times (the 1970s) the tracks were farther apart and the traffic less dense so that the chances of a flight overtaking you (or you overtaking a flight) were much lower than they are today. Now, with RVSM, the other airplanes on the same track are a mere 1000 feet away, and you can get some nice pictures from the cockpit. But the amazing thing is the accuracy of modern GPS/IRS systems – prior to the mid 1980s it was actually rare to fly directly above or below another airplane on the same airway (see below). The small inaccuracies of pure INS systems assured a decent chance of being off to one side or another. These days, if we were much closer vertically, our rudder would have left a crease right down the middle of his belly! No more depending upon the big sky theory today!

The view: Another 767-300 passes us off to the right on the North Atlantic Track system westbound from Europe

The airplane: The United airplane is a 767-300, as is the American Airlines airplane that the picture is taken from.

The pilot: Only the photographer (me) is known.

The mission: As always, whisk a plane load of people and cargo from Europe to JFK.

The memory: This is closer to what “ships passing in the night” looked like 20 years ago, before GPS got so accurate! Today, flights have the option of offsetting one or two miles to the right of centerline if they choose, to make the sky a bit bigger. Meanwhile, on the windshield, note that earlier in the flight a large insect paid with his life for attempting to occupy the same airspace as a 767!

Seven things you should probably know before flying IFR in Canada

Shooting an ADF approach – with no ADF
Scroll to top