Blog - Latest News
You are here: Home1 / Article Archive2 / I was there3 / A really quick turn: a DC-8 evacuation from Uganda 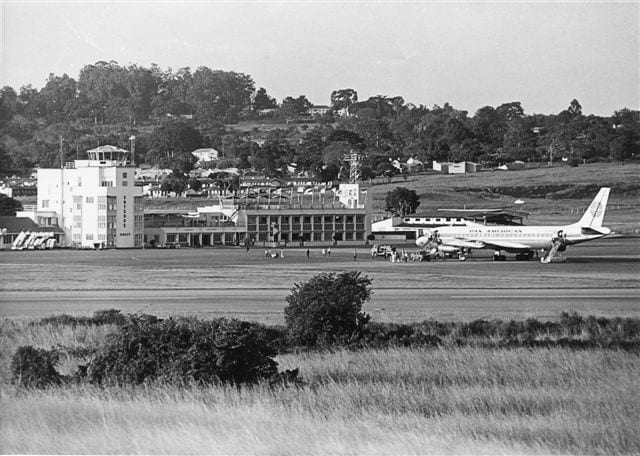 The night was dark and stormy at 33,000 feet over the Alps en route to Paris, when the No. 1 engine low pressure warning light came on with an increase in oil temperature so we shut it down.

But let’s go back a bit. I was a DC-8 captain on reserve when Scheduling called and asked how I would like a five-day trip.

“Well,” said the scheduler, “it’s to London, then deadhead Paris, then to Nairobi, then from there to Uganda to evacuate some Asians on behalf of the UN.”

Just a quick trip to Europe… and maybe a little further.

On September the 24, 1972, I operated Montreal (YUL) to London Heathrow (LHR) with DC-8 Fin No. 807. Then, with my crew, we carried on to Paris Orly as passengers on Air France. We departed Orly on the 26th direct to Nairobi via Italy then to Benghazi, as we were not permitted over the United Arab Republic or Chad. After an eight-hour trip, we landed at the Nairobi airport – which happened to have Canadian air traffic controllers on duty.

The flight crew and four male pursers proceeded to our hotel. The company was concerned that female cabin staff might be in danger from the Ugandans. Checking in at the hotel, I noticed a Caledonian crew at the desk with a figure in the captain’s uniform looking a bit familiar so I went to say hello and found we had been sea cadets at HMS Vulture St. Merryn in Cornwall on a two-week summer camp during 1946.

He asked what I was doing and, on advising him of our operation to rescue the Asians from Uganda, he said, “When you contact Entebbe, if they say confirm your pressurization is normal, don’t land.”

Shortly after, I received a phone call from the Canadian ambassador in Uganda asking if I could give a definite landing time at Entebbe so that he could escort the school buses carrying our passengers to the airport. He also advised he would be in a white Mercedes with a Canadian flag on the roof, so 13.30 hrs was decided on.

When we got to the airport to prepare for our flight to Uganda, the promised two cases of oil for the Rolls-Royce Conways supposedly boarded in Orly were missing, and in discussion with the PAA agent-cum-mechanic, he pointed out that East African Airlines operated the VC10, also Rolls-Royce Conway powered.

He took me over to their base where I requested two cases of Rolls-Royce Conway oil. They looked at my Canadian dollars with suspicion. I said, “The company has given me $5000 for incidentals,” so instead I offered to sign a form for the oil, signing it Pierre Elliot Trudeau per Capt. Ron Macdonald.

Entebbe Airport was not the place to get stuck without an APU.

The flight over Lake Victoria to Entebbe was uneventful and as we approached the F/O said he could see the school buses and the white Mercedes nearing the airport. There was some apprehension as we approached the terminal as we could see a lot of military personnel and when we parked, I left the No. 3 engine running until I was assured of an airstart, as we had no APU on DC-8 aircraft. I opened the forward door to be met by a six-foot Ugandan soldier holding a rifle at me, but pushing past was a PAA agent who said, “I have an airstart; you can shut down.”

The school buses had arrived and boarding the passengers began immediately, then the PAA agent gave me a telex from LHR dispatch stating they were unable to arrange a landing in Italy for fuel but had got permission for a fuel stop in Athens. The navigator and I looked at the charts and worked out the distance from Entebbe to Athens, about a seven-hour flight as again we had to fly to Benghazi before heading east for Athens.

There was some minor harassing of the passengers by the Ugandan troops, but the Canadian High Commissioner used his influence to keep the flow of passengers moving.

With the Athens fuel stop, we were now to be at maximum takeoff weight at a temperature of 28 C (82.4 F) degrees, so we opted to take off to the south over the lake for a more stable surface temperature, then turned north heading towards massive thunderstorms. (As an aside, we crossed the equator four times in 24 hours.) With the radar on, we wandered around the Cbs then asked the navigator for a heading to Benghazi and he said turn left four degrees.

The approach to Athens was quite interesting, curving in over the harbour and lining up on the ILS where the runway seemed surrounded by confusing lights so I stayed heads down to 200 feet to ensure a safe landing on the runway.

After reaching the ramp and shutting down, we were met by elements of the Greek Army with an officer demanding to know who had given us permission to land at Athens. I produced the telex from LHR dispatch, so he calmed down but kept his armed men at the bottom of the boarding stairs. A representative of Olympic Airlines then arrived and he arranged for a fuel uplift and gave me a message from LHR now advising us that we could not land at Orly because no landings were permitted after 23.30 hours. So we now had to plan Le Bourget.

We fueled up, got some fresh water and off we went to Le Bourget. When cruising at 33,000 feet over the Alps, the No. 1 engine oil pressure light came on with a rise in oil temperature so we shut it down.

The reason many people were leaving Uganda – Idi Amin.

The approach to Le Bourget was again interesting as it seemed totally surrounded by the lights of the city of Paris. On shutting down and deplaning, I was met by the captain for the next leg to Montreal who said, “Where the hell have you been, Ron?”

I said, “Well, you won’t be going anywhere for a while as I had to shut down number 1 due low oil pressure.” With that, my crew and I left for a well-earned rest.

On returning to Montreal, I gave back the $5000 to Captain Bill Irving, my boss, telling him that I had signed Pierre Elliot Trudeau then my signature for items required. He almost had a fit, but then we had a good laugh. I was told, however, never to use the Prime Minister’s name again.

It had been an interesting trip and some of the stories our passengers told the flight attendants were pretty harrowing. They thanked us all for flying into Uganda to evacuate them from the on-going terror of Idi Amin.

Just as a small note, I had told my wife, Marge, that I was off to London then Paris for four days. So when I got back home she asked, “How was Paris?” I said, “Just the usual.” To which she replied, “How come your name was mentioned on the CBC news as having successfully rescued 142 Asians from Uganda?”

What could I say except that I did not want to worry her.

How to fly safely when you’re low and slow