Blog - Latest News
You are here: Home1 / Article Archive2 / I was there3 / A real flying machine – logging some Stearman time 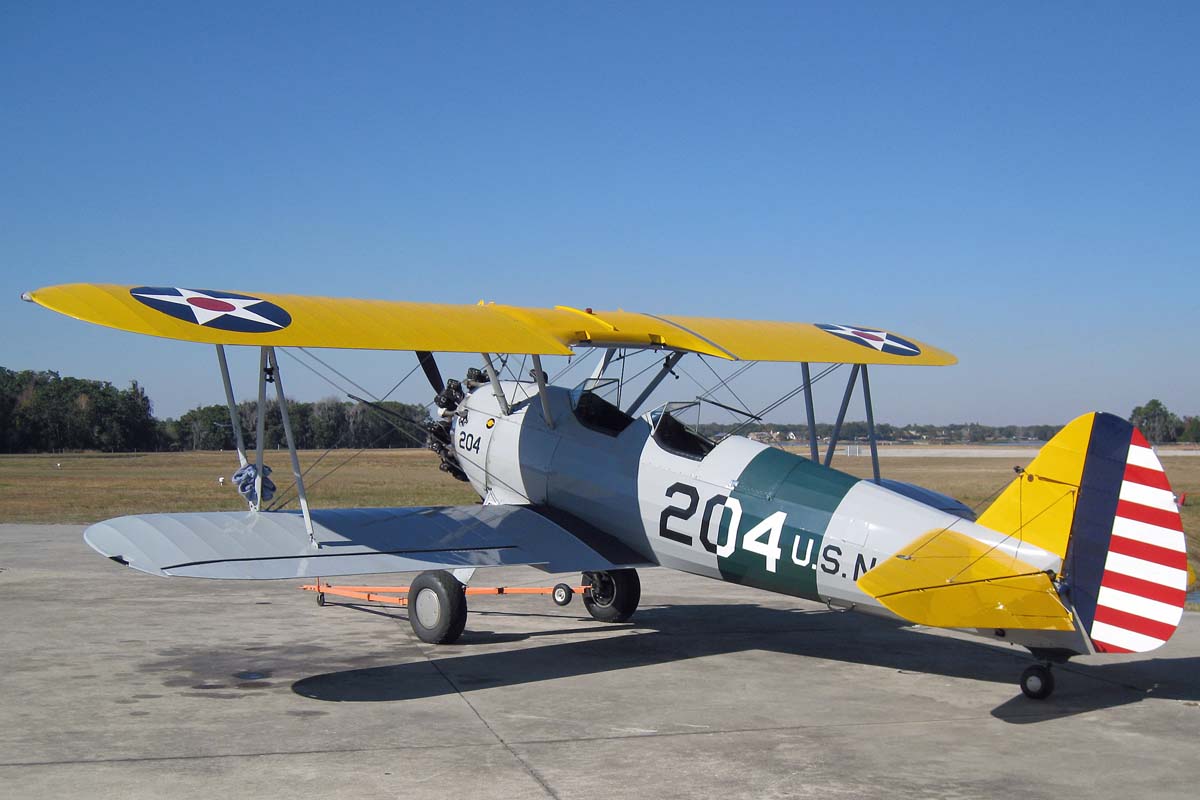 During February 2012, I had the opportunity to fly a Boeing Stearman located at Kermit Weeks’s Fantasy of Flight at the Polk City Airport, Florida. The previous year, I had flown as a passenger from the same airport, in the open cockpit of a biplane called a New Standard 25, and it brought back memories of the Tiger Moth I had learned to fly in 1947 and made me desirous of flying the Stearman that was parked next to the NS 25.

Discussions with the pilot, “Waldo,” indicated the Stearman was available and that I would do the flying so arrangements were made that the next time I was in Florida I would organize a flight. The arranged day arrived and I travelled to Polk City Airport and there on the ramp looking every bit a beauty was the Stearman Kaydet N 25-3 painted in US Navy colours with number 204 on the side. Over 10,000 Stearmans were built for the US Army Air Corps and the US Navy and many RAF pilots were trained on the Stearman during World War II.

During the walk-around, the size of the Stearman compared to the Tiger Moth is very evident and the uncowled Lycoming R680R looks very business-like. After checking all flight controls and the flying wires for tension, I got into the front cockpit with some help, and Waldo (real name: Rob Lock) explained the very basic instrument panel, which was very similar to the Tiger Moth. Radio communications between the cockpits were checked as loud and clear and the engine started with the usual puff of smoke from a radial engine.

As we taxied the forward, visibility was poor so “S” turns were made to the grass runway where a run up was completed and all flight controls checked. Waldo said he would do the takeoff invited me to follow through. The sound of the engine at takeoff power was like music to my ears after the years of flying jets and, after lift off, Waldo said “you have control and climb to 700 feet.” In flight, the controls were light and responsive and the roar of the engine described what flying was all about – simple, basic airmanship in a real flying machine.

Fantasy of Flight is a unique destination for the aviation enthusiast.

The weather was standard Florida – blue skies, high cirrus, and 80 degrees – and I felt like the sky belonged to me. Levelling off at 700 feet, Waldo suggested I try a few turns, pointing out that no rudder was required for left turns but a fair boot-full would be required to keep the ball centered for right turns. He also explained that the crossed wires ahead between the upper wing and the fuselage that, when placed on the horizon, put you in a 45 degree bank.

Aerobatics are not permitted as the aircraft is not equipped with parachutes, so lazy eights and chandelles were permitted. Waldo then said put some yaw on and smell the engine. The pleasing odour of engine oil is a heady experience.

The aircraft is equipped with a smoke generator so we painted the sky with a bit of smoke, which seemed to attract the people and the cows on the ground. We then discussed the approach and landing and headed back to the airport. In order to keep the runway in sight on final, I stayed a bit high, crossed the threshold and gently eased back for a three-point landing which Waldo said was “well done.” I taxied towards the ramp, gently turning left to right to ensure I did not hit anything. Waldo took over for parking the airplane.

After shut down, I sat for a few minutes and then with some help got my 82-year old frame out of the cockpit to see my son-in-law, a recently retired Air Canada Boeing 777 captain, smiling at the big grin on my face, which was for the pure enjoyment I had experienced.

My son-in-law, Doug Massie, then went off with Waldo and I was able to watch the Stearman take off and climb skyward, looking every part the airplane she was. When Doug taxied in, I could see that he had also thoroughly enjoyed flying a superb airplane in the blue skies of Florida.