Blog - Latest News
You are here: Home1 / Article Archive2 / I was there3 / I have slipped the surly bonds – in a Spitfire 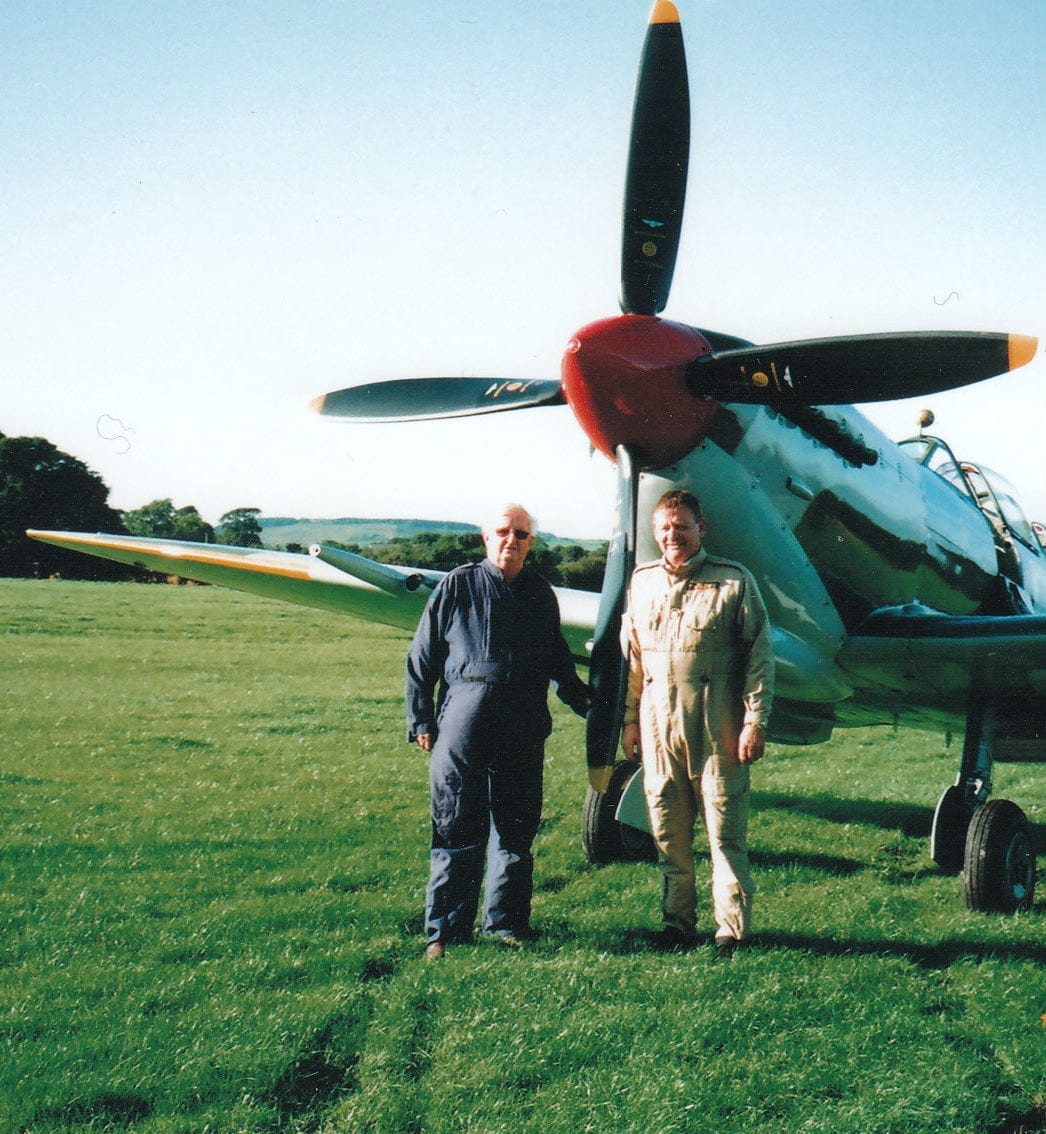 Just to go back a bit, during World War II, I lived on the edge of an RAF fighter station, Heston airport. The Polish 315 Squadron was based there flying Spitfires, 11s then Vs and I often made models for the pilots using the squadron code PK and the individual aircraft code. Often I watched these young men taxi out in groups of six, do a formation takeoff and head into combat.

A Spitfire on a grass runway – just about heaven.

My love for the Spitfire has never waned and at one time I was involved with Seafires at Dartmouth, Nova Scotia, HMCS Shearwater. The Seafire was a very complex variation of the Spitfire. For many years, I have been trying to arrange a flight in a two-seater but, so many times, weather or aircraft serviceability caused cancelation. Finally, it was all arranged and off I went to North Wales with my friend Peter Holland driving.

We arrived at Bryn Gwyn Bach Farm. At the entrance was a full size fibreglass replica of a Mk. 1X so I knew I was in the right place.

At the far end of the farm was a hangar and inside Spitfire 1X. PT462 was gleaming and looking every inch the perfect lady. I stood there and inhaled the wonderful odour that only powerful piston engines give off and realised my dream was about to become true.

Introductions were made and I met the pilot, Anthony Hodgson, who said, “I will do the takeoff then it’s all yours.” He asked if I had any medical conditions he should know about. I advised that I had leukaemia but did not think it would affect me. So, he told me to put on a flying suit, get the parachute fitted and Phil the crewman would do the briefing when in the cockpit and to enjoy the flight.

When I was settled in, my seat straps attached, Phil explained the instrument layout which quickly brought back similar cockpits I was in during 1949-1950. He then explained the emergency drills and how to bail out, which we both decided I would rather avoid.

I put on my bone dome and Anthony did an intercom check. He said he did all his checks aloud so I would hear them. I heard six shots of prime, four blades, switches on and the bark as the Merlin 41 started with the usual puff of smoke then settled down to a comforting rumble.

Getting to know an old friend.

After a few minutes idling, the chocks were pulled and we taxied out to the takeoff point where we did the run up, mag checks, flight controls fully free and canopies shut. Anthony said, “Away we go.” The sound of the magnificent Merlin was pure magic and soon we were airborne, gear up and I heard in my headset, “It’s all yours, Ron.”

I climbed to 4000 feet, first doing gentle, 30-degree banks then 60-degree banks, finding the ailerons very light and the aircraft very sensitive in pitch, but I was enjoying the experience so much. On my headset, Anthony said to do anything I liked, so I said, “How about you do a barrel roll and I will follow you through?” I was a little concerned how my 78-year old body would react, but it went well.

I then settled down to reflect on the beauty of the aircraft, the perfect elliptical wings, the power of the Merlin and thoughts of the incredibly brave young men who flew the Spitfire in combat. Soon, Anthony said to return home and at 1000 feet he said he had control. He throttled back, gear down, flaps down and a standard curving approach with a perfect three-point touchdown.We taxied in, shut down the engine and for a couple of minutes I just sat there enjoying the sounds of the engine cooling, the gyros spinning down and the beautiful sunshine.

When I got out, with a little help, everyone was smiling while I was grinning from ear to ear. Anthony, completely relaxed as usual, shook my hand and said, “Well done, Ron.”

Four flights and a lifetime of memories