Blog - Latest News
You are here: Home1 / Article Archive2 / John's blog3 / How to fly safely when you’re low and slow 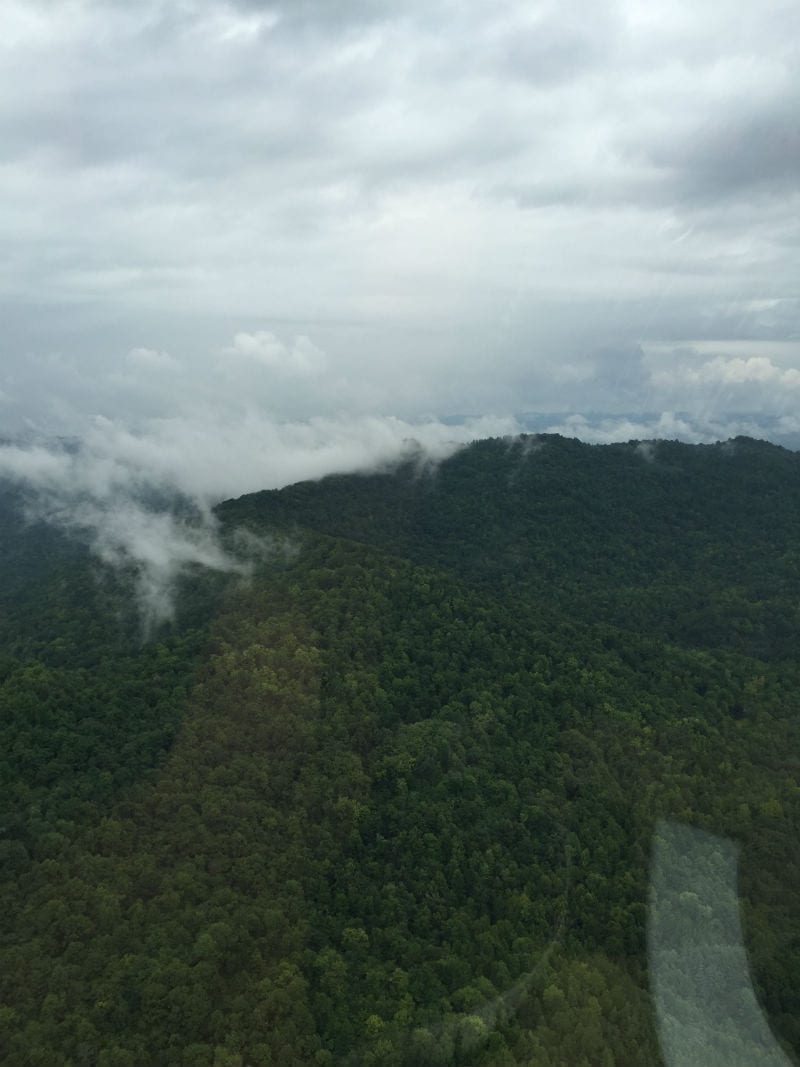 You don’t have to fly IFR at 10,000 feet to travel efficiently by general aviation. I was reminded of this fact after logging 15 enjoyable hours over the past month – all at 500 feet and 100 knots in VFR-only aircraft. Even with some weather to deal with, I went exactly where I wanted, with only minimal delays, and had a lot of fun.

That doesn’t mean it was boring. Over the course of one trip in particular, I hit a few speed bumps, and in the process I re-learned some important lessons about weather, decision-making and technology. Most importantly, I learned that flexibility pays off when you’re VFR.

Not a great start to a VFR trip.

As I opened the curtains on day one of my trip, it didn’t look promising. Low clouds and fog clung to the trees around Cincinnati, and not just in the valleys where it had been forecast. I headed to the airport to complete my preflight, hoping the rising sun would burn off the clouds. An hour later, though, the METAR was stubbornly stuck at 600 overcast. This was more than just inconvenient, since developing thunderstorms at my destination made every delay potentially serious on this hot summer day. I wanted to be on the ground in Tennessee before things got too convective.

After nervously eyeing the sky every 30 seconds, trying to will the clouds into parting, I recognized a potential trap and hit the pause button. I was spring-loaded to go flying the minute blue sky appeared overhead, potentially chasing a sucker hole just to stay on schedule. While I’m a proponent of “taking a look” when flying VFR, this approach brings with it great pressure. If you’ve been waiting for two hours and then take off, are you really going to turn around and land if things aren’t as VFR as you hoped? It’s awfully hard to do.

Recognizing this mistake, I made a smart decision and went inside. I told myself that I would only look at the weather in 30 minute increments, to prevent me from chasing temporary changes. Overkill? Perhaps, but it worked. I took off 90 minutes later than planned, but by then the weather had cleared significantly and my departure was uneventful.

Lesson one: If you’ve been waiting on marginal weather to lift, don’t take off until you think there’s a very good chance of success – you probably won’t turn around. Be patient and wait until the trend is clearly in your favor.

Pop-ups or something more organized?

After an hour and a half in cruise, skirting around a little bit of leftover scud, the white cumulus clouds began to grow faster and turn gray. A quick look at ForeFlight showed thunderstorms popping up all over the place – Mother Nature’s popcorn, as a memorable instructor once told me.

There was no major weather system at work here, just the remains of a weak stationary front draped across southern Kentucky. The real work was being done by the heat of the day, as ground temperatures soared into the 90s. While a thunderstorm is always a threat, the difference between afternoon pop-ups and a line of severe storms ahead of a cold front is significant.

Since these storms were not organized, I could deviate around them fairly easily by dodging the rain shafts (by a wide margin). We had a smooth ride all the way. Still, I was happy to be on the ground at 1pm.

Lesson two: Know your air mass. Unstable or stable? Frontal or pop-up? It makes a difference. Perhaps easier to remember is the old advice that, in the summer, it’s best to finish flying by noon.

The weather concerns were over, but the next day brought a new challenge. My destination was a convenient general aviation airport, but it lacked fuel, so the plan was to fly over to a neighboring airport for a top off before giving rides to some local kids.

This should have been a simple mission, but for the first time in my life a self-serve fuel pump let me down. There were no NOTAMs suggesting it was inoperative and I had used the airport often in years past, but when I flipped the switch to turn on the pump I heard only the silence of a quiet country airport. After 10 minutes of troubleshooting, it became clear that there would be no fixing it, and unfortunately there were no fuel trucks.

The only option left was to fly to another airport for fuel, but with 2+ hours of flying logged already, range was limited. There was another small airport over the next ridge, but I wasn’t certain we could get fuel there, and it was time to take a sure thing. After running the math (three times, in fact), I decided Downtown Knoxville was reachable with a safe fuel reserve. Before taking off, I called the FBO to verify their self-serve pump was functional, and that their fuel truck was available as a back up. As a worst case, Knoxville had a crew car and hotels to stay in if needed.

Lesson three: Always have an out, and preferably a sure thing. This cliche is often used with weather, and that’s true, but it’s equally applicable to fuel planning. I was dangerously close to being stuck at a remote airport with no options. When it was time for Plan B, I went with certainty over convenience.

By this time, I was hot, frustrated and thinking about the kids who were not going to get their ride anytime soon. That’s obviously the last thing I should have been thinking about, and sure enough I got my comeuppance: the left fuel cap, which I had removed in anticipation of fueling, rattled to the ground. In my haste to get to Knoxville, I hadn’t taken the time to do a real walk around. Fortunately, I noticed it before starting the engine, but I was embarrassed at my mistake.

Lesson four: When things go wrong, and especially when you’re frustrated, force yourself to slow down and double check your last few steps. Create some personal circuit breakers that pop anytime you’re in a hurry.

The fuel stop in Knoxville and the rides both worked out fine, so all that was left a day later was to fly home. The weather was excellent in Cincinnati, but the first 50 miles looked marginal. Unfortunately, those 50 miles were over some fairly remote terrain in eastern Tennessee and southern Kentucky. That meant METARs were few and far between – educated guess time.

The METARs that were available looked pretty good (3600 overcast was the lowest) and the radar showed just two tiny showers over the hills. Given those positive reports and my experience flying in the area, I took off.

Unfortunately, it soon became clear that 3600 overcast was not the reality in between airports. Those two small showers were barely registering on the radar, but the rain was just enough to create some low clouds in the valleys. In between the rain showers conditions were VFR, but barely. Those METARs weren’t wrong; they simply didn’t represent the weather eight miles to the east, where moisture and terrain were brewing up a whole different micro-climate.

Lesson five: Terrain matters, and not just for avoiding the rocks. Mountains and weather interact in all kinds of ways, so what is true in the plains does not necessarily hold in the hills. Be careful extrapolating too much between distant airports when the terrain is different.

Flying where the weather is good, which means not there.

Any time the weather does not meet expectations, the faster you accept reality the better. I was over southern Kentucky, below radar coverage, so there was no use complaining. It was time to make a new plan. While good VFR had become marginal VFR, I was still legal, safe, and (perhaps most importantly) comfortable with the conditions. I still had a solid escape route to the east if I didn’t like what I saw further down the road.

My new plan was to break the flight down into a series of shorter flights, flying one ridge at a time. I evaluated the terrain and the weather, and simply flew where the conditions were best: blue sky good, gray rain shafts bad. If that meant a 30-mile detour, then fine. While it felt like I was weaving all over the sky, my track log revealed a surprisingly straight path, with less than five minutes worth of deviations.

Lesson six: Be flexible. Don’t get locked into your first plan, and reject the subtle pressure of the magenta line pointing to direct. Take what the terrain and weather gives you.

Once the hills and rain showers were behind me, the rest of the flight turned into a perfect VFR trip. A fuel stop in London, Kentucky, featured fully functional self-serve pumps and a well-stocked vending machine. The sprawling horse farms of Lexington provided excellent sightseeing, the air was smooth and I landed back home exactly on time.

One final lesson hit me the next day, as I reviewed the flight in my mind: Be unapologetic about using technology. Sure, this trip could have been safely completed without any modern gadgets, and some purists might scoff at flying such a basic flight with a portable GPS, an iPad and all the other goodies. But datalink weather, GPS moving maps and terrain alerts made it significantly easier – and safer.

It’s one thing to hope the weather is better over that next ridge; it’s another to know for a fact the terrain drops 500 ft. in five miles and all the rain is behind you. Likewise, making fuel calculations is a whole lot easier when you can get an accurate winds aloft forecast from your iPhone – and even call the FBO to verify the fuel pump is working. Oftentimes you are on your own as a VFR pilot down low, so the more tools you can use the better. Nobody gives out a Purple Heart for general aviation flying.

If you’re an IFR pilot who panics at the thought of flying without a flight plan, take a low level trip in a VFR airplane sometime. It’s a great learning experience, and in some ways, it’s easier at 500 feet than it is at 5,500 feet. As I learned on my way home, such flights often become a series of 25 mile flights, where you simply take what you get and enjoy the scenery. And isn’t that what flying is all about?

A really quick turn: a DC-8 evacuation from Uganda
Scroll to top