Blog - Latest News
You are here: Home1 / Article Archive2 / I was there3 / The curtain call – seeing the Northern Lights from the cockpit 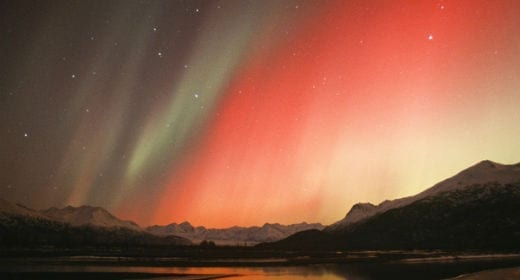 Like a devoted writer who maintains a daily journal, for about eleven years I’ve been in the habit of recording – in my flight logbook – not only the memorable details of my trips for the company, but also the significant occurrences that happen outside of the cockpit; things such as who was involved, what we did, where we went, who came to visit, who I flew or shared time or meals with, who died, was born, graduated, or got married, and any other compelling or interesting events and sights that we witnessed. Before that, I had become lazy, and I recorded in my invaluable epitome with a cold callousness only the forensic flight time without giving much thought to God, the Devil, nature, or human interaction.

Are you just logging flights, or recording memories?

I had reached a point in my flying career where I no longer needed to log any more time anyway, so I thoughtlessly adopted a somewhat cavalier attitude about the hours – “What’s another hundred or two?” I mused. As if that wasn’t supercilious enough, I often docketed my time by the month – sometimes by the year – because logging day-by-day, sixty to ninety hours a month, every month, year-after-year, was becoming more and more of an unwelcome burden.

Now, however, I recognize that because of my past insouciance I have lost track of time, and people, and specifics that should have been more carefully chronicled. And there was one particular flight many years ago that I wish I had been much more diligent about giving a graphic account.

The Northern Lights Centre, in Watson Lake, Canada – in the Yukon Territory – defines the Northern Lights thusly: “The bright dancing lights of the aurora are actually collisions between electrically charged particles from the sun that enter the earth’s atmosphere. The lights are seen above the magnetic poles of the northern and southern hemispheres. They are known as ‘Aurora Borealis’ in the north and ‘Aurora Australis’ in the south. Auroral displays appear in many colors, although pale green and pink are the most common. Shades of red, yellow, green, blue, and violet have been reported. The lights appear in many forms from patches or scattered clouds of light to streamers, arcs, rippling curtains or shooting rays that light up the sky with an eerie glow.”

Empirical scientific knowledge has also decreed that these brilliant displays of dazzling, dancing sheets of light occur fifty or more miles above the Earth – some as high as four-hundred miles. That may be so. And I am sure that these learned men and women with impressive degrees in meteorology and astrophysics who hail from prestigious universities from around the world know much more about the subject than I do. But I am here to tell you that sometimes the northern lights’ exhibitions can manifest themselves at much lower altitudes – altitudes lower than an A320 can fly.

The aurora borealis can appear almost like a curtain.

I enjoy traveling to and being in Alaska. I flew Cessna 207s and 402s out of Nome and Kotzebue for about one year when I was on furlough from the airline. I have seen the northern lights several times; I’ve even heard them – their incessant, almost imperceptible electrical hum filling the air all around me. But like most people from the lower forty-eight, I too thought the displays were always far beyond the reach of all but rockets and space vehicles. I would have never believed you if you had tried to convince me that the impulses could sometimes blazon forth at much lower altitudes above the land of the midnight sun.

The specific event of which I speak came to pass sometime in the late fall of the year 1999. I remember the year only because that was my last one as a first officer for the airline, and the year I flew eight trips to Anchorage, Alaska. I do not recall the name of the compatriot with whom I was flying, but I remember his face – long since retired. Neither do I have recorded the names of the cabin crew who attended our passengers during the flight. Sadly, like so many other years, only the statistical flight time during 1999 is apathetically recorded month-by-month in my logbook like the mundane, reluctant, and indifferent accounting of a factory worker keeping track of the number of steel flanges he’s machined in one day.

The page stares blankly up at me now like it suffers from amnesia. I can’t even begin to remember what should have been inscribed on it, and what now has been lost forever. But on this one wispy night, all of us, passengers and crew alike, witnessed the most amazing phenomenon we had ever seen up to that time in our lives. And I’m sure none of us will ever forget it.

The wildness and precariousness of the outdoors in Alaska beckons with a visceral instinct. But it is also, nonetheless, perhaps the only destination on earth where a rube from Mississippi can feel like he has braved thousands of miles of threatening ocean and menacing sky to get to and still be able to relax in his hotel room while the hapless adventures of Andy and Barney run for the ten-thousandth time on a local station – in English. A pioneer I am not…

A stunning sight anywhere, but especially from the cockpit.

So as we began our descent from thirty-nine thousand feet somewhere off the coast of southern Alaska on this moonless, surprisingly cloudless night, one-hundred-twenty or so miles from Anchorage, I was thinking about getting to the room, changing clothes, and making it down to the bar before they closed. I was in the mood for some steamed crabs and some really good Kentucky sipping whiskey.

All was normal at the top of descent until we both spotted what looked like an undulating patch of orange mist ahead and slightly below us. I first thought it could be some lights on the ground in the distance, but my captain reminded me that there was a solid marine layer of fog everywhere below. Someone asked me onetime what it looked like exactly, and all I could come up with was a feeble comparison with one of those strange, throbbing UFOs that a confounded USS Enterprise crew might stare at incredulously on their viewing screen as they entered uncharted sections of the galaxy. It was simply a glowing, quivering blob of orange light.

As the seconds passed we could see that either it was growing in dimensions or we were rapidly getting closer to it. We finally decided that we were closing on it, and as our distance lessened the shape of the object changed demonstrably. It began to take on the form and texture of a very tall reddish-orange theatrical curtain that was running parallel to our course. There was a sort of velvety sheen appearance to it; it was most assuredly alive with light energy, and it was waving like a flag in a gentle breeze. My captain and I looked at each other with the most unflattering miens, I’m sure, and exclaimed simultaneously: “Northern lights…!!”

We couldn’t believe our eyes. Neither of us had ever heard of such a thing as the Aurora Borealis’ materializing anywhere close to the lower stratosphere. It was inconceivable. But there it was – right in front of us, and it was still growing rapidly in measure.

“Look at the size of that thing.” I said, or thought I said.

Here’s an announcement you actually want to hear.

“Quick, call the girls up, tell ‘em to turn off the cabin lights; and make an announcement to the peeps. We’ll pass it on our right side. Nobody can miss this!” The captain exclaimed as he reached to make sure the seatbelt sign was off. I did just what he said.

If asked now to describe in detail what we saw that night I would have to give this description: Imagine you are sitting stationary on a bicycle at the apex of a large, grassy, treeless hill. Before you lies a concrete sidewalk that runs straight and true – without turn or curve – all the way down to the bottom of the hill – about two-hundred yards ahead. You push off and start down the hill – gaining more speed by the second. Rapidly approaching the bottom of the hill, you see a very long, very tall wooden fence closely paralleling your concrete sidewalk for quite a distance. In moments you will flash past the beginning of the fence and run the same course while examining the boards and graffiti as best you can while rushing past them.

That’s about what it was like, except our fence was made of dancing, swirling, orange light. The captain clicked off the autopilot and maneuvered the airplane close enough to splash the right wingtip into the waterfall of light, but there was no observable change in energy dispersal that I could see. The one distinction I do remember clearly is that there were patches of light that seemed to be brighter and more densely packed than other areas – like they possessed more amps.

As I recall, only one of the flight attendants was able to make it to the cockpit before we arrived at the beginning of our “fence.” The others, along with the passengers, were plastered to any window on the starboard side of the airplane they could get their faces in to. I would guess everyone on the ship that night was in total awe of what we witnessed. Each probably dealt with some personal affectation in his own way; I did.

It was as if a beautiful Avatar had descended upon us and given each of us an esoteric preview of the fortunes and blessings that may come in the future. I know I felt blessed that night. I can close my eyes and still see the beautiful orange curtain rushing past while illuminating the cockpit with a strangely reverential and theatrical glow.