Blog - Latest News
You are here: Home1 / Article Archive2 / I was there3 / Out of control on short final – a freight dog learns a lesson 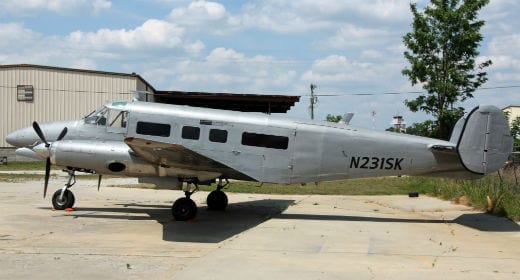 The life of an on-demand cargo pilot could be described in differing ways, except in sacred locales, depending on your penchant for poverty – or a hand-to-mouth existence. Most sensible men of stature in the community, possessed of cunning business sense, would scoff at the very idea of spending their lives collecting nothing but additional hours of experience to docket in a logbook. The pay is dismally low (when it eventually comes), the hours on duty are ridiculously long and fatiguing, and the aircraft, more times than not, are beset with proclivities toward self-mutilation. They can be as Machiavellian as ex-wives.

The Beech 18 with a Volpar conversion is not your average twin.

One late spring night I was returning to my home airport in South Carolina in the company’s Beechcraft Model 18 Volpar convert. The venerable twin-Beech had more than proved its worth through the years. Born in 1937, the Model 18 had originally been designed as an adversary to Boeing’s Model 247 in the burgeoning but pyrrhonistic U.S. airline industry.

Air travel was viewed by the common man in the middle 1930s as a perilous fad soon to vanish from the scene – as did the Conestoga wagon decades earlier. However, newer aircraft being produced by Douglas and Boeing, among others, were much safer than those designed and built shortly after WWI. And Mr. Beech’s Model 18 proved to be a dependable, twin-engine workhorse.

The variant I was flying was a standard Model 18E that had been modified by the Volpar Company. Rather than sporting a tail wheel of the original design, this lengthened craft incorporated a nose wheel. So she sat with her twin tail off the ground like a strutting peahen. It was longer than the original Model 18 by nine feet. Most importantly, it displayed two 750-shaft horsepower turbine engines produced by the Garrett-Air-Research Company – which replaced the older, round-motor piston engines. It was marketed as the Beech Volpar Turboliner, and it served in many distinguishable roles through the years – such as Commuter Airliner and Executive Transport. Its saddle charge this night had a more dubious distinction: Chicken Hauler.

Returning home from El Paso, Texas after delivering hundreds of baby chicks to an egg producer near that desert city, “Bev” (as I named her) performed flawlessly. She was light, and she responded deftly to every delicate input on her controls. As we flew onward into the night we sailed swiftly past sleepy towns and villages across the Southland leaving behind, I imagined, a wistful cadence, beckoning young impressionable children to dream of faraway Castalian adventures. We were in harmony, Bev and I. She was purring, and I was singing. There was no better place in the world to be. Little did I expect that in just a short time Bev would turn on me like an insufferable soubrette.

That “Reverse” range is a really bad idea in flight.

On March 4, 1987, at 2:34 p.m., a Spanish built CASA 212-CC commuter aircraft with twenty-two persons aboard was on its final approach to the Detroit Metropolitan Wayne County Airport’s runway 21R. As the airplane descended through approximately two-hundred feet above the ground it banked to the right, causing its right wing to plunge into the ground several hundred feet to the left of the runway centerline. The machine skidded almost four-hundred feet into a grouping of parked airport vehicles where it came to rest beneath gate F10 of the terminal building. Fire erupted immediately. Of the passengers and crew on board, nine lost their lives that day.

The weather at the airport when the crash occurred was sublime: light winds out of the south, cool temperatures averaging thirty-eight degrees around the field, good visibility. What could have gone wrong?

Among the surviving passengers were two deadheading pilots. Each was commuting to Detroit from Cleveland, Ohio, to begin their respective flight duties. When questioned about the accident, they both recalled hearing the left engine making an inappropriate but familiar sound just before control of the craft was lost. They effectively described the sound as an intermittent growl similar to a car racing its motor rhythmically. To each of them the specific noise was attributable to a propeller moving into and out of the ground-fine pitch, or “Beta Mode,” as it is commonly defined.

A beneficial aspect of turboprop airplanes, even small personal types, is their ability to reverse the thrust of their propellers, which is utilized after touchdown when landing. Operating in the ‘Beta’ mode, the pilot has direct mechanical control over the angle of the spinning propeller blades by, again, simply moving the power lever(s). To transition from the Alpha range (normal flight) to the Beta range (reverse), the pilot merely moves the power lever(s) reward past the flight idle gate.

The flight idle gate is nothing more than a mechanical stop (a piece of metal), located at the bottom range of travel of the power lever (throttle). Pulling the throttle up, over, and rearward past the flight idle gate – into the Beta range – causes many new and exciting things to happen, especially if the airplane is still up in the air.

The official NTSB report of the accident, published many months after the investigation was completed, stated, in part, that the pilot-in-command at the time of the crash had developed a chronic tendency of utilizing the Beta range while still on his short final approach in order to slow his aircraft and shorten the total landing distance. This egregious practice, likened to walking a tightrope suspended above a den of starving lions, should be first on the list of pitfalls to avoid for every prospective turboprop pilot. The consequences are disastrous.

Twin-engine airplanes revel in symmetry. That is to say, the two engines must produce equal amounts of power, so as to unleash the stallion to gallop gracefully through the heavens like a true winged thoroughbred. If this operating condition is not met, then the craft flies with asymmetric or unequal thrust. With that, it grovels through the air sideways like a vertiginous, rabid boar.

It had been a long and exhausting day for me. I had been awake for more hours than I cared to remember, and at three a.m. on this placid night I was more than ready to get Bev back on the ground and into the barn. As I neared the field from over the farms to the west I purposely did not call the radar approach controller on his frequency. During the previous few months he had cogently enticed me into executing what he referred to as the “Johns One Approach” whenever the weather was clear. That meant that anytime I was returning to land after one o’clock in the morning I was not to bother him because he would be asleep. I was to silently approach to within five miles of the field and then simply call the tower for landing clearance. He never did say, but I assumed his name, whether first or last, was Johns. Either way it served its purpose….

I called the tower for clearance, and I was indolently greeted with the same achromatic monotony normally received from mothers-in-law.

Evidently, we were late to the party.

I flew over the airport and maneuvered Bev around to land to the south on runway 18. In so doing, we could roll free-and-easy to the end, and I’d have only a short distance to taxi before reaching my company’s ramp. With sleep heavy in my eyes, an alluring vision of the recently laundered sheets that I had put on my bed two days before appeared in my mind, and I was getting closer to them by the mile. Gear down, flaps down, slow to Vref speed, we were almost home. All I had to do now was to glide the last couple of thousand feet. At just under about thirty feet above the runway I reduced power to the flight idle gate.

Suddenly, I was jolted out of my delectable dreamland by a violent roll to the right. Instant paralyzing fear, equivalent to several thousand volts of crippling electrical current, seemed to anesthetize my entire body. There was no time for panic, but that’s all I could manage to do. We rolled about fifty or sixty degrees. Lights blurred; all sound was silenced. Whether correct or not, I instinctively hauled back on the yoke and attempted to counteract the roll by applying left aileron and left rudder. Conscious thought had already bailed out, and reactive action was all that remained. The roll stopped, but Bev wasn’t correcting herself.

Somewhere, sometime, many years before, a very wise instructor had drilled into me the redeeming practice of undoing what I had just done if the airplane reacted intolerably to it. I automatically slammed both throttles forward to their maximum power stops. The engines, being the geared type, erupted with power immediately. With corrective action control inputs already set, Bev reacted with eager alacrity.

We leveled out quickly just beyond the edge of the runway – aimed at the sentinel pine trees I knew were out there in the dark. Still shaking, I aligned her again with the runway centerline, reduced power to idle on the left engine, and almost to idle on the right. With that, we plopped down ignominiously – more like the ruffled scowl of a vexed hippopotamus. “Thump!” I was simply thankful to get the thing on the ground in any manner.

As I taxied in I asked the tower controller if he had seen the spectacle. There was no answer. Perhaps he was a student of “Johns School of Aloof Observation.” I don’t know.

I logged almost fourteen hours of flight time in those two days, and I also logged a very valuable lesson: never get “behind an airplane.” Think. Always be ready for the unexpected; it could happen at any moment.

Smoke and flames report – is the GA safety picture changing?

From the archives: Leighton Collins flies a 747 to Paris
Scroll to top