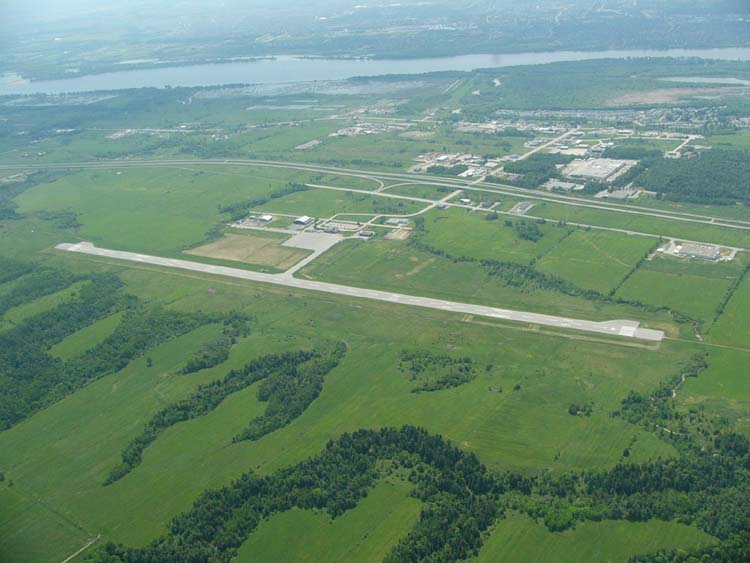 My wife and I had scheduled a trip to Ottawa in our Mooney 231 to begin on Saturday with a return on Sunday. Our departure point was KHPN, Westchester County airport, a short distance from New York City. Our destination was an airport just outside of Ottawa, CYND, Gatineau, where general aviation is welcomed. We would spend time with my youngest daughter who had just taken a professorial position at the University of Ottawa.

Never having landed at this airport previously I made a call to ascertain whether we would be able to park and obtain gas for the return trip. I was told that the only problem would be an airshow that was scheduled to begin on Saturday at 11 am, and I was advised to call the “air boss” for advice about an arrival on Saturday. Having been warned, I made that call and was told that an arrival before 10 am would be OK.

Gatineau Airport is a GA-friendly airport, but only when it’s open.

I had previously applied to CANPASS in order to expedite the process, and having filed out the necessary papers and paid the necessary fee, I was rewarded several weeks later with a CANPASS identification number and was instructed to report my arrival by phone.

In days gone by, before 9/11, our trips to Canada did not require this extra step. Times change.

Now it was necessary to work the departure details through eAPIS and also to put on record the US arrival details. This was my first attempt to negotiate the eAPIS formalities, but I had taken the first step (establishing an account with eAPIS) some months ago.

On Thursday night, I learned that an important family dinner scheduled for Friday night was canceled; we decided to move the trip up a day to Friday as this would allow us more time for the visit to Ottawa.

The weather forecast called for some light to moderate precipitation en route and an overcast deck on arrival in the Ottawa area.

I have been a WingX Pro user, and unlike the situation with ForeFlight, Canadian charts are not part of the package. I went to FltPlan.com for the approach charts and with the necessary US low altitude enroute charts in my flight bag as back up I was covered for navigating the airspace. But as an afterthought I also printed out approach charts for CYOW, the main airport for Ottawa. A further step had been the purchase of a Canada Flight Supplement, a thick guide to Canada’s airports and airspace.

I had decided I would avoid CYOW if at all possible because of excessive fees designed to discourage all but heavy iron.

Since the airshow at CYND, Gatineau, was not scheduled to begin until 11 am on Saturday, the only problem with a Friday arrival would be easily managed IFR weather…and so we departed around noontime having filled out the details of our departure from KHPN and our arrival at CYND with eAPIS. Using FltPlan.com, it was a simple matter to work out an acceptable routing and to estimate the time of border crossing, a requirement for international flights.

A car was scheduled to be delivered to the airport with Hertz.

Having negotiated some light precipitation en route and managing to stay at an altitude below the freezing level, we crossed the border and were handed off to Canadian ATC.

Shortly thereafter ATC contacted us to advise us of a Notam regarding the closure of CYND for the next day’s airshow. That’s the first part of the Trip Up. I replied that the “air boss” had given us permission, naming that person. ATC replied that they would get back to me. While awaiting the news, we heard another plane being given permission to land at CYND. When ATC got back to us, they informed us that we were denied permission.

”What are your intentions?” No use arguing, I thought, as I now had no way to contact the “air boss” for clarification.

My alternate was the main airport, CYOW, even with the excessive fees and the lack of previously arranged transportation, and the requirement to inform CANPASS on arrival at CYND.

It was necessary to set up my Garmin 530w for a new destination. It had already been programmed for the approach at CYND. I fumbled this one by attempting to delete the whole flight plan and inserting a new one on the first page. It would have worked if I merely added the new destination along with the approach or alternatively had programmed the second page of the Garmin’s flight plan for an arrival and approach at CYOW. Since my autopilot took directions from the Garmin I pulled out the approach chart to RWY 32 and hand flew the approach using my old King RNAV unit.

I had met Mr. Murphy again: if things can go wrong, etc.

Well, we got down, and were directed to one of the two FBOs on the field. Overnight on the ramp was $75 with more charges to follow. Getting through to CANPASS on the phone took quite a few minutes, but they were not concerned about our new arrival point and did not think it was necessary to inspect our plane. We requested a top-off of fuel. (On Sunday we saw that this had not taken place). Check and double-check, this was not a new lesson. Hertz was able to cancel one car and schedule another.

The time in Ottawa was spent well. My daughter was well set up in her new apartment and had begun her new job. Ottawa is a beautiful city with delightful parks and many fine attractions.

Revising the new flight plan for return to White Plains, Westchester Airport was handled on my iPad easily, having learned all the mistakes that could be made previously.

The trip back took only about two hours. Compare that with a drive that takes between seven and eight hours.

Customs clearance at KHPN used to be available on Sundays with prior arrangement at the old Avitat FBO. Jet Systems now housed Customs and Border Protection at the same building, and they seemed quite busy with multiple arrivals and three agents.

Having got that one under my belt I think the next trip will be easy…maybe.

Postscript: I made the trip again recently with no problems. Canadian ATC worked with me and the folks at CYND were very friendly and helpful.