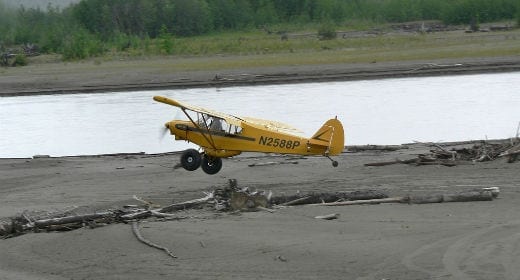 Here’s another in our series of Air Facts questions for aviation community members. Mort is a longtime Alaska bush pilot, now retired and living in Florida. Mort is the real deal when it comes to bush pilots and we knew he would have some fascinating insights. You can read about some of his most memorable flights in his new book, What It’s Really Like: Flying the Alaska Bush.

Are you a native Alaskan? What drew you or your ancestors to that area?

I was sent to Alaska after a run-in with the second in command at a small radar site in Montana. He didn’t have the proper security clearance and I ran him out of the blockhouse. He made a telephone call to division headquarters in Great Falls at 11:00 pm that night, and at 6:00 am the following morning, I received my orders to ship out.

Mort Mason spent many years flying all over Alaska.

What do we in the Lower 48 not understand about Alaska weather?

That it truly does change in the blink of an eye. The large number of mountain ranges and the very limited number of weather reporting stations and facilities make it very difficult some days for the bush pilot to execute his planned flight.

If I came up to visit you and requested the perfect Alaska flight, where would we go and what would I see?

The “perfect Alaska flight” would only be possible if you already knew what sort of thing you hoped to see. One may fly one thousand straight miles in Alaska and never see a town, village, road, or candy wrapper in that vast country. And by the way, I no longer live in Alaska, having retired to Florida (a mistake for a mountain man).

What aspect of flying in very cold weather would surprise us or we may not have considered?

The smallest bit of water may freeze in the plane’s tanks overnight in severely cold weather. Adding about one ounce of alcohol to each tank will allow that alcohol to surround the water molecules, meaning they will pass through the carburetor or fuel injectors without deleterious effect. A momentary engine roughness will be the only noticeable result.

What’s so special about pilots from Alaska?

The ability to improvise, certainly. Bush operations include very few prepared landing areas, and small damages to an airplane are common. I once had to whittle a bunch of spruce plugs to thread into the cowling retaining screw locations in a Cessna 180 in order to keep the cowling from leaving the plane. Emergency bush repairs may mean wet newspapers will be used to temporarily patch torn fabric; and the rubber tops from an old pair of hip boots may serve to patch a small hole punched in a float.

I have four “affordable” favorite bush planes: the Piper Super Cub, of course, and no modifications to engine or wings are required. Next, the Cessna 180, because of its power and light weight. Third must be the Cessna 185, because of its 300 hp engine, mechanical flaps, and constant speed prop. Finally, the Cessna 206, hopefully turbocharged for high altitude operations. It’s favored because of the large loading door, which means that caribou and moose horns need not be sawed apart to get them inside the plane, especially in case they need to be scored later for record book inclusion. Its only drawback may be the electric flaps, which are too slow in operating to assist water takeoffs in tight areas.

As a lad, and while caddying near our local grass airstrip in Marietta, Ohio, a driven golf ball hit the golf bag I was holding. I had been distracted while watching a mail plane, an old Stinson Reliant, drop and pick up the mail bags at that strip. I decided then and there that flying was much safer than golfing, and thought flying seemed both more sensible and a lot more exciting.

Is there a flying season in Alaska or any weeks where nobody flies?

Not really. Summer is busier, of course, but mostly because of the tourist industry.

Are they any rules of thumb, sayings, slogans, mottos among bush pilots?

Run every drop of aviation fuel through a chamois as you fuel up. Best advice: “Maintain thy airspeed lest the ground rise up and smite thee.”

How has flying in Alaska changed over the past 30 years?

Well, Loran-C was a great benefit, and worked extremely well in Alaska (though not in the Bahamas, strangely). Alaska’s bush pilots still rely heavily upon their ADF equipment, as even in areas where no LF ranges are left, there are still the standard broadcast stations. And, while we would never admit it, the ADF will steer the pilot around hills and mountains that block signals in the VHF band. That means that scud flying in Alaska has a definite boost. Dangerous? We didn’t really think so, though the signals sometimes wander. They will still guide the pilot around obstructions. The introduction of reliable GPS has changed Alaska dramatically, of course, and many bush pilots rely upon it. And most still aren’t enamored of the new “glass panels.” We are always aware of such things as electrical fires, and we much prefer the old “steam gauges” and their primary instruments: needle, ball, and airspeed. Few newer pilots today are comfortable with that basic array of instruments, but they ARE reliable.

Skis or floats?
Skis, floats AND wheels, of course. Each has its definite place in Alaska bush flying. Some of Alaska’s very best fishing, for example, is accessible only with wheels. By that I mean beaches, river gravel or sand bars, and tundra (for big bush wheel operations). Each has its place, to be sure.

We posed a question to Mort whose answer isn’t included here. We asked him for his best tall, but true, bush flying story. Lucky for us that Mort went beyond answering this request by turning his tall, but true, story into a full article.

A trip (up) north

Have pilots lost their sense of adventure?
Scroll to top